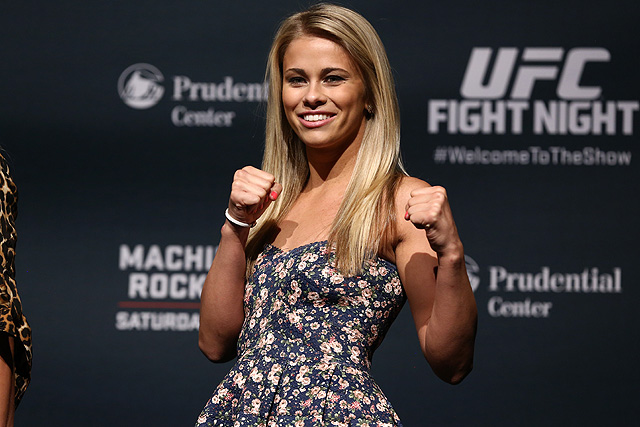 A blonde bombshell has taken over the UFC. With her starlet good looks, winning smile and relentless fighting style, she’s well on her way to taking the sports world as a whole by storm.

No, I’m actually not talking about Ronda Rousey. Her throne as the best female fighter in the UFC (if not the world) is well established. But she might have company before too long in Paige VanZant, a strawweight fighter who’s 2-0 in her UFC career after her dominant performance against Felice Herrig at the UFC on Fox 15 card.

While VanZant and Rousey both share blonde hair, a photogenic look and a wealth of talent, that’s where the similarities start to wane. Besides competing in a different weight class, VanZant is enjoying an initial burst of popularity, including an official Reebok sponsorship despite having only two UFC fights. It wasn’t until Rousey came over to the UFC following the purchase of Strikeforce that her popularity really took off.

VanZant has all the tools to join Rousey and male fighters like Conor McGregor as the UFC’s next big star. She took the fight to Herrig from the opening bell and did not stop. VanZant unleashed a torrent of ground-and-pound that overwhelmed Herrig and made her look like the amateur rather than the wily veteran Herrig was supposed to be going into that fight. I had doubts about VanZant going into that bout. I thought she was being pushed too far, too soon.

I also thought Herrig would serve as a reminder that it wasn’t quite VanZant’s time yet. Boy, was I wrong. I came away just as impressed with VanZant as I was with McGregor when he finished Dustin Poirier at UFC 178 last year. I wasn’t quite ready to ride the McGregor hype train before then, but I jumped on with both feet after he made quick work of Poirier. Likewise, I wasn’t quite ready to buy into VanZant before her fight with Herrig, but I will purchase stock now.

However, VanZant isn’t quite ready for a title shot yet. Judging by how current strawweight champion Joanna Jędrzejczyk demolished Carla Esparza to capture the belt, VanZant’s ground-and-pound style might not match up well with the champ’s striking. A convincing victory over a Rose Namajunas or Jessica Penne would make a title shot for VanZant much more realistic and less like UFC President Dana White is trying to rush his new golden (haired) goose onto the big stage.

Who knows? If VanZant continues to develop her skills and puts together a string of finishes, there’s no reason why she can’t become the Ronda Rousey of the strawweight division. Maybe she’ll even go on to star in Fast and Furious 16: The Next Generation.