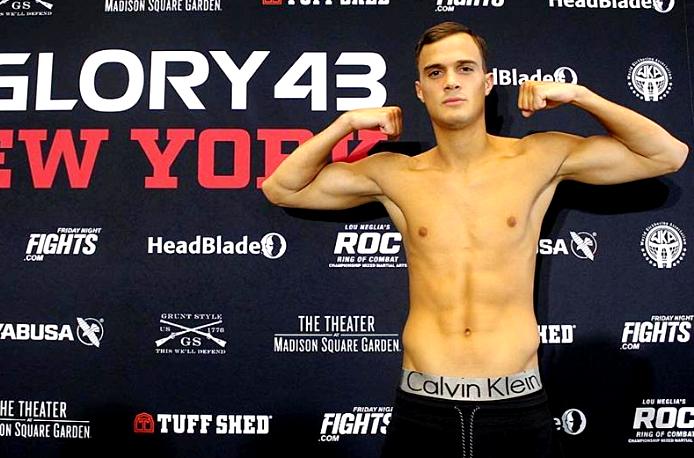 Everyone is born into some sort of lifestyle. Whether a person comes from a traditional or alternative family, grew up in a city or countryside, had working or stay-at-home parents or caregivers, had relatives close by or in a foreign country, was in a family business, or had not family at all, they did not have a choice what environment they were born into.

Jonathan Di Bella definitely grew up in a unique environment. 26 years ago, he was born and raised in Montreal, Quebec, Canada in a traditional Italian family. His grandfather was an Italian baker, so he enjoys eating good pizza and pasta. His parents are still together, and he still lives in his hometown today. Occasionally, his family travels back to Southern Italy to visit relatives.

Di Bella’s upbringing was traditional in many senses, but one unique aspect is that his father, Angelo Di Bella, is a former professional fighter and high-level kickboxing coach. He currently owns Team Di Bella Kickboxing Martial Arts in Montreal. Di Bella’s dad had him training at only two years old.

“I am an only child, and I grew up in the home gym,” Di Bella told Combat Press. “I didn’t play any other sports growing up.”

Di Bella was competing in amateur kickboxing by the time he was 10 years old, and, 16 years later, he currently is 10-0 in pro kickboxing, competed in GLORY Kickboxing, went 20-0 as an amateur, and holds 17 combined pro and amateur knockouts. He also went 6-0 as an amateur boxer, and has yet to be beaten in either of the two sports.

Pro fighters in Canada, along with many other countries that host kickboxing events, had a rough go during the height of the COVID-19 pandemic. This was especially troublesome for Di Bella, who had just signed with ONE Championship before the world shut down. Many promotions were out of commission, and it was hard to get fights, so Di Bella did what he could to stay busy.

“I signed with ONE Championship in 2020, but, obviously, had to take a pause due to the pandemic,” Di Bella said. “I had a two-and-a-half-year layoff, so I did a couple pro boxing matches earlier this year.”

In Jun. 2022, Di Bella fought in a boxing match in Montreal and won by decision. A month later, he fought again in his hometown, and he won that one by second-round knockout. However, as the events of 2022 unfolded, he now finds himself in a fight for the vacant ONE strawweight kickboxing title. Not a bad turn of events for a promotional debut that is over two years in the making.

The first ONE strawweight kickboxing title was won by Sam-A Gaiyanghadao in Dec. 2019. He never defended the strap, as he won and defended the inaugural ONE strawweight Muay Thai belt in 2020, before losing that title to Prajanchai PK.Saenchai in Jul. 2021. He subsequently went into temporary retirement at the beginning of 2022, and, since then, the strawweight kickboxing championship has sat vacant. On Friday, Oct. 21, Di Bella will face Peimian Zhang for the title in the main event of ONE 162, live from Kuala Lumpur.

The 19-year-old Chinese standout Zhang has already fought twice for ONE, and both were earlier this year. He made his promotional debut in March, when he finished Josh Tonna in the second round. Then, in July, he bested Aslanbek Zikreev on the judges’ scorecards after a three-round battle. Both Zhang and Di Bella have positioned themselves for a championship showdown on Friday.

Di Bella is more than ready for his shot at ONE gold, and he didn’t really have much input on his opponent. To him, it’s just another fight, and the strap is just icing on the cake. Speaking of food, while he loves a good home-cooked Pomodoro or Bolognese dish, he had a specific comfort food he said he could bring right to the weigh-ins.

“I can eat pizza on the scale, because I’m already on weight,” said Di Bella. “People should tune in, because I’m an exciting fighter. I plan on holding onto the belt for a long time.”

ONE 162 airs live on the ONE Championship website starting at 7 a.m. ET.