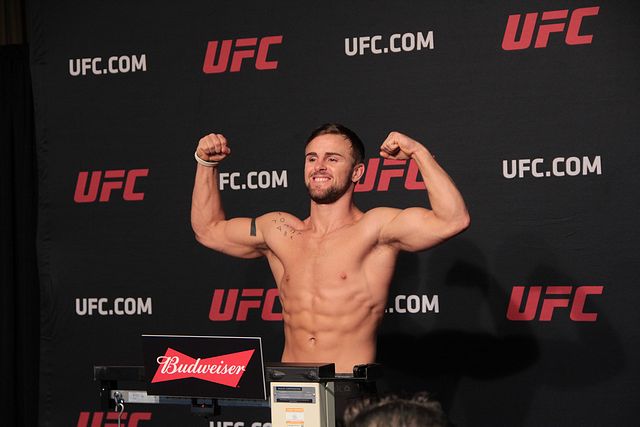 UFC 250’s Cody Stamann: Strength in the Face of Adversity

This has not exactly been a year to remember thus far. Between the coronavirus (COVID-19) pandemic, a bear market, job losses, and riots over police brutality, people can only hope the second half is better than the first. Just about every single person has experienced some kind of plight, but these are the times when people can choose to be strong or weak.

Cody Stamann’s year started off pretty well. He was coming off a 2019 campaign in which he registered a win over Alejandro Perez at UFC 235 in March and fought to a draw against Song Yadong in December. He entered the new year with an offer to fight Raoni Barcelos in late March. He was a solid six-plus weeks into camp when sports started shutting down due to the virus. By March 16, he discovered the event on which he was scheduled to compete had been postponed.

“I was obviously bummed,” Stamann told Combat Press. “There was just a ton of work that was put into camp to fight March 28 and then everything’s canceled. Everything was going so well and then we had to cancel. I was gutted. I was sad, but I wasn’t the only one going through hell at the time. Misery loves company. Everybody was dealing with their own stuff with COVID-19, so I couldn’t complain too much.”

The UFC had to scrap a series of events, but it was announced in late April that the shows were going to start back up in May and would be hosted at the empty VyStar Veterans Memorial Arena in Jacksonville, Fla. Stamann did not hit any of the May lineups, but he kept a positive mindset in the face of adversity. Things worked out, as he soon had a new fight lined up. The terms and opponent were still up in the air, though.

“There were talks that we were going to fight in May, so I started preparing in April,” said the former NCAA Division II wrestler. “When I found out May probably wasn’t going to happen, I thought I was fighting Barcelos [on] June 6. I was awaiting a confirmation that I was fighting Barcelos, and as I was reading my email, I got a call from my manager that Barcelos was hurt, and he was going to need a couple weeks.”

That was no sweat to Stamann, who had already been waiting two month. However, the constant changes kept coming.

“A week later, I found out he, for sure, was out, and they were going to look for replacements,” said Stamann. “It was between a few guys. Out of those guys, I felt like, stylistically, Brian Kelleher was the best match-up. I poked at him a little bit online, and he took the bait.”

On Saturday night, Stamann will get to do more than just poke. He’ll get his chance to punch, kick, wrestle and more when he takes on Kelleher at UFC 250. The event will be held at the UFC Apex in Las Vegas. Stamann, who trains in Las Vegas at Xtreme Couture, is in good spirits and ready for his upcoming war.

“I’m doing great,” Stamann said. “I couldn’t be happier. Fighting at home at 145 pounds for a fight that I’ve been getting ready for three or four months now, it feels like an eternity. I feel like I’ve been training this entire year, with no fight that was solid that I knew was going to happen until now. So, I honestly could not be happier for the way this all turned out.”

Kelleher may not be ranked nearly as high as the 15-1 Barcelos, but he is on a two-fight winning streak. He scored a second-round knockout of Hunter Azure just a few weeks ago. With 31 total fights under his belt and 17 stoppage victories, Kelleher is a dangerous fighter.

“Obviously, everyone in the UFC’s tough,” Stamann explained. “I think my former opponent, Raoni Barcelos, was probably the better athlete — more well-rounded and more technical, for sure. He’s a black belt. He’s a really good wrestler. He’s got a ton of accolades, and that was going to be a really tough fight.

“I wasn’t all that impressed with what Brian Kelleher did against Hunter. I thought Hunter was actually winning that fight until he got clipped. That was just a rookie mistake that he made. Based on what I saw that night, he still seemed pretty green. He was rushing a lot of shots. I don’t think that Hunter and I are in the same league, by any means.”

Stamann has now been in one of the longest camps of his professional career..

“Two and a half months ago, I was preparing for a fight,” said Stamann. “For two and a half months, I’ve been training. So, I’ve been able to build on the foundation I’d already been working on for a long time. I think it’s time to relax and kind of enjoy myself. I’ve been on the grind, and I’ve kept sharpening my tools. On June 6, I think I’ll be the best I’ve ever been when I step into the cage.”

Tragically, adversity struck again. Just two days after his interview with Combat Press, Stamann found out that his 18-year-old brother Jacob passed away unexpectedly. Until this week, he had canceled all other interviews , but he recently came out and said that he will still be fighting. He’ll do so to honor his brother.