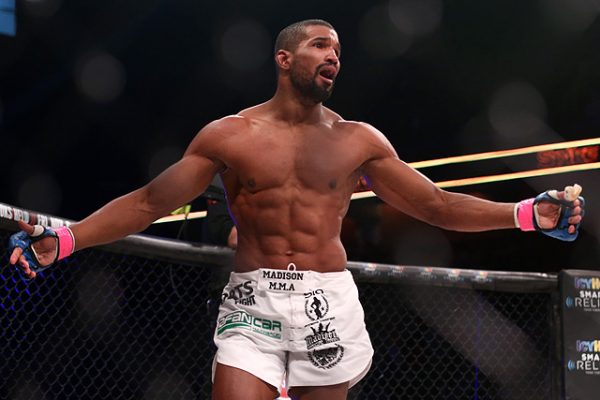 Congratulations to Bellator. The promotion heads to the SSE Arena in London this weekend for a milestone event: Bellator 200.

The headliner of the evening is a middleweight title fight. Rafael Carvalho looks to defend his crown against UFC veteran Gegard Mousasi.

Carvalho has defended his title three times since winning it against Brandon Halsey at Bellator 144. His last two title defenses came in Italy.

Mousasi, who has won belts in Strikeforce and Dream, is no stranger to title fights. He is on a six-fight winning streak dating back to his time in the UFC. Mousasi is coming off a victory in his Bellator debut against Alexander Shlemenko.

The co-main event pits lightweight phenom Michael “Venom” Page against his toughest opponent yet, Bellator veteran David Rickels. Page has remained undefeated in his 12 fights so far, but he is coming off a close split-decision win against Fernando Gonzalez. Rickels has won three straight fights, with his latest coming by decision against Adam Piccolotti.

The main card also features action in the light heavyweight division, where Linton Vassell takes on former Bellator light heavyweight champion Phil Davis. The lineup is rounded out with a catchweight bout at 163 pounds between Aaron Chalmers and Ash Griffiths and a women’s flyweight scrap between Anastasia Yankova and Kate Jackson.

The Bellator preliminary card airs on Bellator.com at 7 p.m. ET. The main card airs live on the Paramount Network at 9 p.m. ET.

Rafael Carvalho defends his middleweight title against Gegard Mousasi in the top-billed fight on this card. Will Carvalho retain his strap, or does Mousasi become the next in a recent wave of UFC veterans to capture a title?

As good as Carvalho may be, he hasn’t faced anyone that is even in the same galaxy as Mousasi. Mousasi is riding a five-fight winning streak. Three of those victories came in the UFC against Uriah Hall, Vitor Belfort and Chris Weidman. That is wildly impressive. Now, he’s made the jump over to Bellator, where you can really only make an argument for Carvalho as a top-15 middleweight in the world and little more.

Mousasi has all the makings to become the next in line to capture a Bellator strap. He has a good ground game backed up by an even better striking arsenal. Mousasi also has so much experience. This is just another title fight for the former Strikeforce and Dream champ. The gap between Mousasi and the rest of the Bellator middleweight division is immense. In fact, it’s on par with what other UFC-turned-Bellator champions like Rory MacDonald and Phil Davis faced upon their arrivals in the organization.

Carvalho has good striking and grappling as well, but it’s not on the same level with Mousasi. He hasn’t lost since his first professional fight. Meanwhile, he has earned victories over Melvin Manhoef, Alessio Sakara and Brandon Halsey. Mousasi is obviously far superior to that group.

If Mousasi shows up to fight — and he doesn’t always — then this is going to be a sure victory for him. This should either end up as a knockout victory or a decision.

Michael Page barely squeaked by Fernando Gonzalez in his last fight. Will his upcoming opponent, David Rickels, be the first man to hand Page a loss?

This is easily one of the hardest fights Page has had to date. Rickels is no joke. “The Caveman” has been one of the better fighters in Bellator’s lightweight division since his debut. Rickels like to turn fights into a brawl, though, and that will play into Page’s striking background.

Rickels’ four losses come against some of the better talent Bellator has on its roster. He dropped bouts to Karl Amoussou, Patricky Freire and Michael Chandler. That is two former title challengers for Bellator and then, of course, a former lightweight champion. Rickels is also riding a three-fight winning streak. He looks hot right now and could very well seek to exploit Page in a dragged-out war on the feet.

Page has a creative striking attack, but he has to make sure not to get drawn into a brawl. Instead, he needs to keep this fight on the outside to protect himself from any power shots Rickels might throw. Rickels could also look for the takedown, which Page has struggled tremendously to defend.

This isn’t one of Bellator’s fights where the company is tossing Page an easy win. Instead, the organization will test its star against a solid veteran that could spell huge trouble for Page if he isn’t careful. Overconfidence could be Page’s downfall.

This fight is a lot closer than many people think. Page is the hot pick in all of his fights as a result of his penchant for the flashy knockout. His highlight reel is insane. However, he hasn’t yet scored a big finish against someone like Rickels.

Despite Rickels’ chances to derail Page, the victory here will go to “Venom” in what should be a very entertaining fight. This one should steal the show.

Prior to the scrapping of the original main event for Bellator 200, Aaron Chalmers and Ash Griffiths had claimed a main-card slot, whereas Anastasia Yankova and Kate Jackson were relegated to the preliminary card. Only after a lineup change did the ladies join the main card. What does this tell us about Bellator’s priorities?

It’s nothing we haven’t already seen before. It seems kind of pointless to get mad over this. Bellator has been well known for making odd choices in its lineups. The company has shortchanged the women’s division and favored legend fights over more important fights between contenders. Bellator is well known for going against what we expect in terms of its fight picks for the main card.

This is another head scratcher, though. Yankova was signed as one of the organization’s top-billed flyweight ladies, but Chalmers and Griffiths were chosen because this fight is on British soil and Bellator needs to pump up the crowd for its 200th event.

We go through this every few cards, but it’s hard to always look at these weird choices and get upset over them. Bellator is going to Bellator at the end of the day. It’s a meme. For us to enjoy the promotion’s cards, we have to accept this.

Now, while this is the reality of the situation, it doesn’t mean Bellator is right to do things this way. The promotion should be building up its women’s flyweight division. Yankova is someone worth building up, and Jackson, with a victory, will have taken another big step up in Bellator. This could be a potential showdown of future title challengers in Bellator.

Davis won’t put on a thrilling fight, but he gets the job done with his smothering wrestling. He is the one man in this light heavyweight division that could beat current champion Ryan Bader. A win here could put him back into range for the title. This is especially important if Bader comes out on top of the heavyweight tournament and stays at the heavyweight level.

Vassell is also coming off a title loss to Bader. Before the failed title bid, he had won three straight fights. A victory over Davis would be absolutely monumental for Vassell. In fact, it would be his biggest career victory by a large margin.