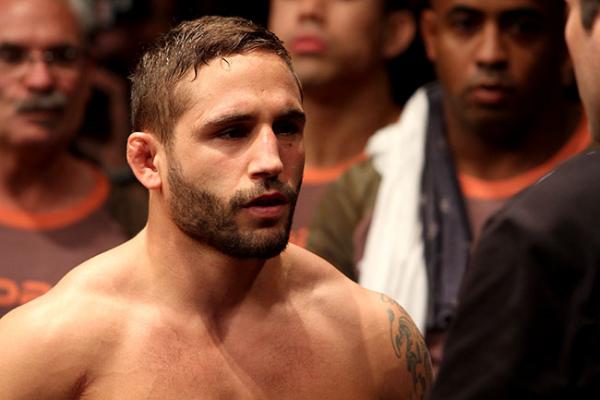 Right now, the majority of people are spending their days indoors and at home waiting out the eventual decline of the coronavirus. Combat-sports organizations have put on the brakes as well, canceling and postponing events out of an abundance of caution or due to government limitations put on large gatherings. How do fight fans fill this void? Well, let’s take a minute to remind the fans of some of the greatest UFC bouts of the past. Sit back, relax and watch these fights to get your MMA fix over the next few weeks.

In the year 2014, fans were already used to seeing former UFC featherweight champion José Aldo dominate his opponents from start to Finish with his impeccable striking arsenal and superb takedown defense. By October of that year, Aldo had successfully defended his belt eight times and continued to convincingly beat every opponent placed across from him in the Octagon.

Meanwhile, Chad Mendes was building his own winning streak after suffering a loss against Aldo two years prior. Mendes went on to defeat the likes of Darren Elkins, Clay Guida and Nik Lentz before being rewarded another shot at the “King of Rio” in a title bout that would take place in Brazil. While many fans expected Aldo to convincingly defeat Mendes again, the bout instead proved to be a thrilling back-and-forth affair in which both men found success over the course of the five-round battle.

The bout started off with a bang, as Mendes darted across the cage to pressure Aldo with his heavy punches and fast footwork. Aldo remained composed and used his trademark stance to challenge Mende’s aggressive movement. Suddenly, Mendes landed a beautifully timed left hook that put Aldo on the floor and had fans roaring in excitement. Aldo quickly rose to his feet, regained his composure, and found himself fighting a much different Mendes than the one he defeated two years ago. Aldo went on to hurt Mendes at the end of the round, which resulted in a knockdown.

By the end of the first frame, it was obvious that this was going to be a battle for the ages. Both men hurt each other soundly in the third round with monstrous uppercuts, and Mendes continued to poor on the pressure with power strikes in the fourth. The bout resulted in a unanimous-decision victory for Aldo and became an instant featherweight classic.

Matt Hughes is one of the greatest UFC champions of all time. The number of historic bouts, title runs, and memorable rivalries that have come at the expense of his UFC career is truly incredible. Hughes has fought many huge names in the sport of MMA, including B.J. Penn, Matt Serra, Georges St-Pierre and Royce Gracie. However, perhaps no bout is as memorable in the storied career of Hughes than his rematch with Frank Trigg in 2005.

Hughes had lost his UFC welterweight championship a year prior to the aforementioned Penn before going on to regain the belt later the same year against St-Pierre. After losing to Hughes two years prior, Trigg had scored a couple of TKO victories to position himself to once more challenge the welterweight kingpin Hughes. Their rematch served as the co-main event to Randy Couture and Chuck Liddell at UFC 52.

Hughes was in immediate trouble after Trigg landed a low knee to the groin that the referee failed to spot. Trigg aggressively attacked Hughes with everything he had in effort to stop the fight as quickly as possible without giving Hughes a chance to recover. Trigg assaulted Hughes with heavy ground-and-pound and eventually secured a rear-naked choke position with all signs pointing to a controversial win for the challenger.

In a moment that can only be exemplified in Hollywood movies, Hughes was able to reverse the position on a shocked Trigg and take over the show. He picked up Trigg and sprinted across the cage, all while holding Trigg over his head with every intention to inflict as much damage as possible. Hughes slammed Trigg and began an assault of his own. He was determined to repay Trigg for the earlier attack. Eventually, Hughes secured a rear-naked choke that forced Trigg to tap. In doing so, Hughes effectively pulled off one of the greatest comebacks in UFC history.

If you are a fan of fights that get off to a fast and aggressive start, then look no further than the clash between Diego Sanchez and Clay Guida in 2009. The first minute of the fight alone boasts more action than 90 percent of MMA fights.

After dropping down to fight at lightweight, Sanchez was one fight away from earning a title shot against B.J. Penn. The catch? Sanchez had to get through the equally tough and ultra-competitive Guida, who was coming off a split-decision victory over Nate Diaz. The lead-up to the fight featured over-the-top staredowns. Both men took multiple opportunities to glare, boast and posture up on each other in an effort to gain a mental advantage. Guida’s walk toward the Octagon resembled that of an Energizer bunny whose battery was on overdrive, while Sanchez made his approach with his gaze locked on Guida from start to finish. It was a moment that truly defined what type of bout these two men were about to partake in.

The opening bell rang, and Sanchez darted forward toward the bouncing Guida with every intent to induce as much damage as possible. What followed was arguably the most vicious two minutes in UFC history. Sanchez attacked Guida with flurry after flurry of strikes that backed Guida toward the cage. Sanchez continued to attack while Guida attempted to defend as efficiently as possible. The former The Ultimate Fighter winner soon followed with a head kick that dropped Guida, who managed to survive the round.

Guida came back strong in the second stanza. He used his wrestling and immense pace to control Sanchez on the ground, with the latter offering adequate ground defense and stinging sharp elbows to damage Guida from the bottom. Bloodied and tired, both men entered the third round ready to leave it all in the cage.

Sanchez inflicted most of the damage,whereas Guida controlled the pace and direction in what was sure to be the “Fight of the Night,” if not the “Fight of the Year.” The end result was a split decision in Sanchez’s favor and a lightweight showdown that would have fans clamoring for a rematch sometime in the future.

Ever since the merger between the UFC and the WEC, the lighter divisions in MMA have continued to grow and develop into some of the most competitive weight classes in MMA today. The UFC lightweight division has been the most talent-rich division in combat sports for many years.

Two of the division’s most notable names over the last several years are Tony Ferguson and Anthony Pettis. Ferguson is currently riding a 12-fight winning streak and is slated to challenge Khabib Nurmagomedov for the UFC lightweight championship. Pettis is a former UFC lightweight titleholder who has scored notable wins over Benson Henderson, Stephen Thompson, Donald Cerrone and Michael Chiesa.

After scoring a surprising victory over Chiesa and effectively recharging his career, Pettis landed in the co-main event slot against the surging Ferguson, who was coming back after suffering a serious knee injury.

In the first round, Ferguson dictated most of the fight using his crafty and unorthodox striking. Pettis spent the frame mostly on the back pedal and trying to defend. The second round was a completely different story. After matching Ferguson blow for blow, Pettis threw a rear-leg body kick and followed up with a perfectly timed short right hook that staggered Ferguson and sent him into scramble mode. The relentless Pettis continued his attack and landed yet another well-timed right hook that sent Ferguson to the mat and Pettis into Ferguson’s guard.

After two rounds of incredible action, Pettis’s longtime coach threw in the towel between the second and third frames after realizing his fighter had suffered a broken hand. The bout earned “Fight of the Night” honors and furthered reminded fans that Pettis was able to hang with the best in the world on any given night.

Not enough action for you? Make sure to go back and check out Part I of our Downtime series, featuring even more UFC action worthy of a rewatch.