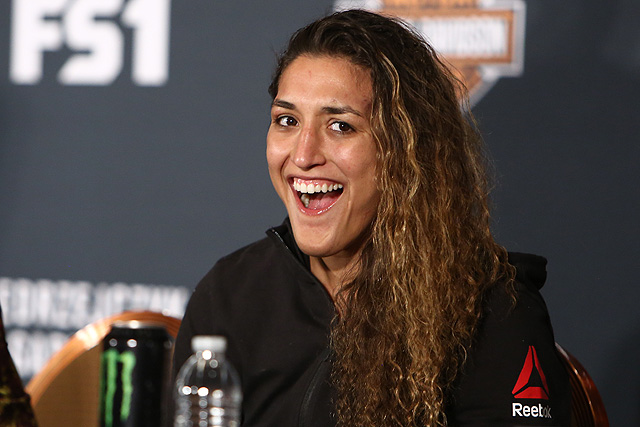 TUF 23 Winners: A Future Contender and a Chance For Improvement

Every season of The Ultimate Fighter reality show gives at least 16 fighters an opportunity to prove they have the potential to compete with the best fighters in the world.

Two more winners of TUF earned their chance at the conclusion of the 23rd season of the series. These fighters are women’s strawweight Tatiana Suarez and men’s light heavyweight Andrew Sanchez, both of whom won their UFC debuts and final TUF fights in fairly dominant fashion.

One of these fighters appears to have much better all-around skills. The other fits the mold of the typical fighter who is moderately skilled in all the areas they need, but nothing overtly stands out in their game.

Suarez claimed top honors in the TUF 23 women’s strawweight bracket. She won her fight against Chel-c Bailey to get into the house. She scored an easy decision victory and then tore through the rest of her competition, defeating her opponents with three different submission techniques. In her first fight, Suarez beat JJ Aldrich by rear-naked choke in the second round. In the semifinals, she stopped Kate Jackson by guillotine choke in the first round.

Suarez is also a two-time bronze medalist at the women’s wrestling World Championships, representing the United States in 2008 and 2010. Her accolades in wrestling and grappling have been on full display for MMA fans to witness, especially in her performances so far in the UFC.

Suarez executed in masterful fashion in the victory that gave her the TUF 23 crown. She took on fellow Team Claudia standout Amanda Cooper. Suarez dominated from start to finish, taking Cooper down, landing fantastic ground-and-pound, and finishing her off with a fantastic d’arce choke to take the submission win at 3:43 of the very first round.

Suarez not only showed unbreakable poise in her first official UFC fight, but she didn’t seem phased by the spotlight. She took it in stride and proved that she has the talent to be a real force in the division, but she was also humble enough to know that she’s still young in this sport and will only learn and grow.

Sanchez, meanwhile, was the winner of the TUF 23 tournament for the men’s light heavyweight division. He won his fight to get into the house by defeating Phil Hawes via a two-round unanimous decision. His first fight after getting into the house was a unanimous nod over Myron Dennis of Team Jędrzejczyk. His second fight, a semifinal-round knockout of Eric Spicely, was much more impressive than his first two. At the TUF 23 Finale event, Sanchez fought heavy hitter Khalil Rountree and defeated him via unanimous decision.

While Sanchez definitely showed his talent, let alone in a weight class above his own — he has pledged to drop down to middleweight for his next bout — he didn’t exactly perform in amazing fashion to truly be recognized as a real up-and-coming “Ultimate Fighter.”

Both fighters stamped their names as contenders, but Suarez is the one who has more potential to be a dominant force. That’s no disrespect to Sanchez, who’s also fought in other small organizations and has experience. However, after all of Suarez’s recent performances and dominance, the expectations are high and she seems to rise above them every time.

Meanwhile, Sanchez, who still needs to make his UFC debut in the 185-pound division, has been fairly lackluster in his performances on the world’s proving ground for MMA fighters. Other than the one fight he finished via knockout, Sanchez has grinded his way, albeit dominantly, through all his opponents. Maybe that’s just his general fighting style and his way of wanting to play it safe, but it doesn’t make him a very big attraction for UFC fans. At this pace, he will just be another wrestler who grinds and stalls to get wins. Sanchez even admitted doing as much in his fight against Rountree to avoid Rountree’s incredible striking ability and knockout power.

Every TUF winner needs time to acclimate themselves under the bright lights of the UFC, but it’s safe to say that Suarez has a head start in that department. She might be able to spend less time acclimating and instead work on getting into the mix of top contenders very soon. Sanchez also has that opportunity in a middleweight division that hasn’t had many top contenders for quite a long time. That’s good news for Sanchez, but it still doesn’t mean he can use the same strategy and game plan he has used in the recent past.