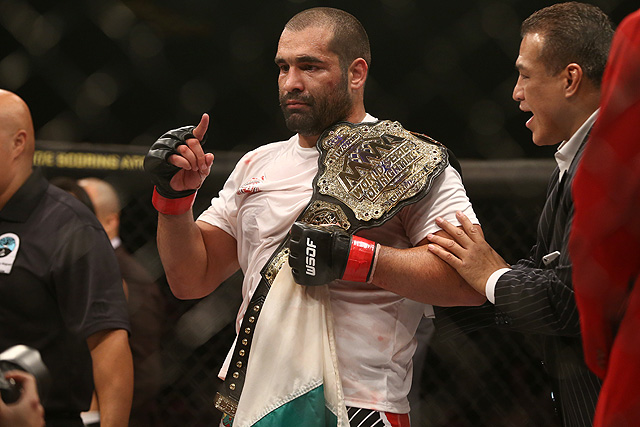 WSOF 31: What’s Next For the Winners and Losers?

The World Series of Fighting’s 31st numbered event went in the books on June 17. Now, it is time to spin things forward. Let’s look at the victors and maybe some of those who were defeated and talk about what’s on everybody’s mind: what’s next?

Ivanov looked good, but he was pushed — partly by Copeland and partly by circumstance. There was, of course, the cut. There was a point in the fight when Ivanov must have felt like the chance at a victory was going to be taken away from him. The doctors were looking very closely at the cut above his eye. However, the champ hung in there, protected the cut from getting worse and found the path to victory.

All signs are pointing to new WSOF signee and UFC veteran Shawn Jordan as the next opponent for Ivanov. That would be a hell of a fight. Ivanov is a good athlete for a heavyweight, but he’s not a Shawn Jordan level athlete. However, his technique is cleaner. He sets traps and walks people into them, and he’s been able to get away with this approach against the competition he has faced thus far. Jordan is a step up, though, and should for all intents and purposes still be on the UFC roster.

Copeland looked good. There is something there. The WSOF needs to make sure to get him back in there quickly to capitalize on the success he had against Ivanov and to build his confidence. On the same night as Ivanov-Jordan, the WSOF should pit Copeland against Derrick Mehmen. These are the last two opponents the champion faced, so it makes for a simple piece of matchmaking. There’s also another former title challenger, Smealinho Rama, Ivanov’s opponent before Mehmen and a fighter who has already knocked out Mehmen. With a thin division, it’s not rocket science here, but the most important thing is to get Copeland back in the cage sooner rather than later.

High was pushed in the second round after owning the first. It looked to be Ricci’s fight until High landed the straight left to put the Canadian on ice skates. High swarmed and the ref wasn’t too far behind, making it a second-round TKO for High.

High’s next foe, or a lot of reasons, has to be Justin Gaethje. First, let’s not kid ourselves: a guy like High signs with the WSOF to contend for a belt in rather short order. High has the skills, and he proved with his performance against Ricci that he deserves the shot. Second, he can push Gaethje in a way the champ hasn’t been pushed. High has top-notch wrestling and jiu-jitsu. Someone has to get the lightweight champion to the mat and see what he has there. High can do it. High can get Gaethje down, but it’s just a question of whether he can keep the champ down. No matter what, he’s the guy.

Ricci showed everything in this fight, good and bad. If his opponent closes the distance and works the cage, then Ricci can be had. However, if he controls the distance, then he’s trouble for anyone at 155 pounds because of his size and diverse skill set. There are a couple of attractive options here, namely Brian Foster or Ozzy Dugulubgov. If the WSOF is looking to provide Ricci with a path to the title shot, then the promotion should pair Ricci with Dugulubgov. As a side note, the WSOF should do Foster vs. João Zeferino III as well.

This was a fight where Arrant threw “Doomsday” Howard for a loop early. The Xtreme Couture fighter kept busy and did not allow Howard to get set. Ultimately, Howard found the timing, landed a big takedown and some big shots, and had done enough in the 15 minutes to get the majority decision.

Styles make fights, and Arrant didn’t have a favorable fight style for Howard. Howard’s next fight should feature a little more traditional of an opponent. Yushin Okami comes to mind. Okami allows Howard to be pushed, but provides the WSOF with an established name for Howard rather than giving him a prospect and therefore halting the progression of a fighter like Abu Azaitar or Abubakar Nurmagomedov. Other options for Howard include Matthew Frincu or Danny Davis on the low end. João Zeferino would also be an interesting booking.

We need to see if Arrant has skills or if he just had a great game plan for Howard. Depending on how quickly the WSOF is looking to turn him around, Arrant could fight Robert Fonseca, who just had his fight with Sean Lally scrapped.

These two men started slowly. The story of the fight was Moraes’ leg kicks and use of distance. There were some exciting exchanges, but a better performance by Moraes would have had WSOF fans screaming for a fight with the next featherweight champion. They’re not.

Unless WSOF featherweight champion Alexandre de Almeida and former champ Lance Palmer put on an instant classic that warrants a trilogy fight, the victor of that title rematch is probably going to get Moraes next. Moraes does deserve it, necessarily, but he has fought for the bantamweight belt, blasted UFC vet Robbie Peralta and bested Palomino over the span of 15 minutes and so the shot is his.

And Palomino? On the one hand, he’s perfect to be the guy others have to fight to get a shot at lightweight champion Justin Gaethje. The problem is, he could earn his own fight with Gaethje if he strings together some victories. No one is looking to see that fight. A stay at featherweight is probably the more solid play for Palomino. He could be positioned just a couple of fights from a title shot, and the WSOF could give him the loser of Palmer and Almeida. There is some young talent in this division, too. Hakeem Dawodu or Marat Magomedov would be attractive opponents for Palomino as well.

In what has been called a “showcase fight,” Hawes did what he was there to do. He looked impressive and took care of Key quickly. The TKO came early in the fight, the way it was “supposed to.”

There are some interesting choices to pair with Hawes. Rex Harris. Clinton Williams. Cory Devela.

Harris and Williams just fought. Harris won, but Williams makes more sense if the WSOF is bringing Hawes along at a slow pace. Williams has fought at 205 pounds, though, and that may be too much of a push size-wise for Hawes right now — not down the road, but just for now.

The guy that makes more sense is Devela. He’s a step up in competition, but he’s coming off a loss and gives the WSOF a path to the next three or so fights for Hawes. Devela lost to Louis Taylor, who is slated to fight Shamil Gamzatov. If Hawes can get through Devela, then he can fight one of those gentlemen and continue to climb the ladder.