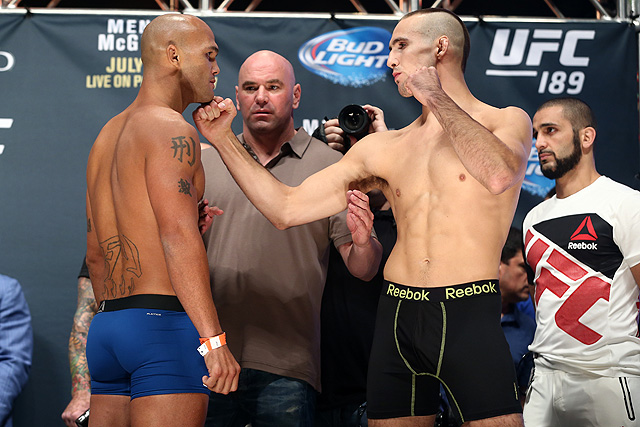 Downtime: UFC Fights to Rewatch During the Coronavirus Shutdown, Part I

Right now, the majority of people are spending their days indoors and at home waiting out the eventual decline of the coronavirus. Combat-sports organizations have put on the brakes as well, canceling and postponing events out of an abundance of caution or due to government limitations put on large gatherings. How do fight fans fill this void? Well, let’s take a minute to remind the fans of some of the greatest UFC bouts of the past. Sit back, relax and watch these fights to get your MMA fix over the next few weeks.

If you want to have a conversation about arguably the greatest one-round fight of all time, it’s impossible not to mention the four minute and 41 second slugfest between Travis Browne and Andrei Arlovski at UFC 187. Arlovski had recently rejoined the UFC and was riding a four-fight winning streak coming into the bout with Browne, who was out to build upon a monstrous knockout of Brendan Schaub. This was a thriller heavyweight showdown that would effectively launch the winner into the title picture.

Fans were treated to a War of the Worlds-esque bout in which both men landed thunderous haymakers and repeatedly dropped each other. UFC commentator and popular podcast host Joe Rogan has consistently regarded this as the best one-round bout we have ever seen in the UFC. Ultimately, the bout ended with Arlovski hurting Browne repeatedly in the last minute of the round, which led to a referee stoppage. For those fans who have not seen this one, be prepared for a heavyweight showdown that will keep you on the edge of your seats!

The first time Robbie Lawler and Rory MacDonald faced off at UFC 167, fans and experts were convinced that these were two of the best welterweights in the division. After a close contest in which Lawler edged out MacDonald by split decision after a late knockdown in the third round, fans were in love with the idea of these two eventually meeting again. Lawler went on to win the UFC welterweight championship by defeating former champ Johny Hendricks. Meanwhile, MacDonald carved out a winning streak that included victories over Demian Maia, Tyron Woodley and Tarec Saffiedine all within a matter of nine months. This led to the UFC designating him as the No. 1 contender to challenge for Lawler’s throne.

The pair finally rematched at UFC 189 as the co-main event to the Conor McGregor and Chad Mendes showdown for the interim UFC featherweight championship. The bout began with both men feeling each other out and a very unclear victor for the first round. In round two, things quickly changed, as Lawler fired his powerful left hand while MacDonald maintained a high guard and threw his robotic jab and various high kicks to combat Lawler’s pure strength and power. The biggest change in momentum came in round three, when MacDonald found a home for his head kick that clearly stumbled and displaced Lawler for the remainder of the round. MacDonald flurried Lawler several times in rounds three and four, but he could not put Lawler away. At the end of the fourth frame, the two warriors met in the middle of Octagon, locked gazes and said nothing as the ref and respective corners pulled them away in preparation of the fifth and final round. It was a moment that would give many in attendance and those watching at home a chill and rush of excitement.

With both men clearly exhausted and extremely bloody, the fifth round began. Lawler was seemingly the fresher fighter. He came out firing his straight lefts over and over, while MacDonald turned to the high kick that garnered him much success in the third and fourth rounds. At the one-minute mark, Lawler landed a straight left right on MacDonald’s nose that sent the challenger to the canvas to cover up his damaged face. The referee had seen enough and called the bout in favor of Lawler by TKO. Lawler had retained his title. The bout resulted in a shattered nose for MacDonald and a torn lip for Lawler that both still haunt fans till this day. In the end, fans were treated to one of the greatest UFC fights of all time and quite arguably the greatest UFC welterweight bout in the history of the sport.

After compiling an undefeated record through 17 fights, Justin Gaethje would finally have the opportunity to introduce himself to UFC fans in 2017 against the ever-dangerous UFC veteran Michael Johnson. Johnson, who had come up short against current UFC lightweight champion Khabib Nurmagomedov, was tasked with welcoming arguably the top lightweight outside of the UFC to the Octagon in a bout that would headline the TUF: Redemption finale in Las Vegas. This was viewed as a difficult UFC debut for Gaethje, due to Johnson’s vast experience fighting top contenders like Tony Ferguson, Joe Lauzon, Edson Barboza, Beneil Dariush, Dustin Poirier and Nate Diaz. It was up to Gaethje to prove that he belonged.

The bout began with Johnson utilizing his longer reach and crisp boxing to control the distance and dictate the pace of the fight. Gaethje struggled to get inside Johnson’s reach and utilize his famous leg kicks. Johnson was able to rock Gaethje twice with his superior punching, and it seemed only a matter of time before he would finish the former World Series of Fighting standout. Instead, Gaethje recovered due to his incredible conditioning and was able to land a series of punches and knees in the second round that staggered Johnson and sent him backing up against the cage in survival mode. Gaethje continued his onslaught of punches and knees, which resulted in a referee stoppage at 4:48 of the second round. The fight was considered an instant classic and had fans screaming to see Gaethje compete again inside the Octagon.

It’s truly incredible how a number of fighters started their UFC career by simply picking up a phone call to fill in as a late replacement for another competitor who unfortunately suffered an injury or other setback. This was the case for promotional newcomer Lando Vannata in July 2016, when he was called upon to face surging lightweight contender Tony Ferguson, who was riding a seven-fight winning streak and on his way to a title shot. Vannata took the bout on two weeks’ notice and was fighting the No. 3 lightweight contender in the world in his first UFC bout. With the odds stacked greatly against him, the Jackson-Winkeljohn MMA standout entered the bout ready to show fans why training partners such as Cub Swanson and Donald Cerrone had been raving about him for years.

Ferguson accepted the opponent change after preparing for Michael Chiesa, who was stylistically very different from Vannata. The night could not have been more memorable, as Vannata showed no sign of Octagon jitters and met Ferguson in the center of the Octagon to exchange blow after blow. Both men had their moments in the first round, but it was Vannata that hurt Ferguson with his crafty striking and almost put the top lightweight contender away prior to the end of the frame. In the second round, Ferguson bounced Back by using his stellar cardio and eventually put away the UFC newcomer with a D’Arce choke. The bout earned the two competitors “Fight of the Night” honors and launched Vannata’s UFC career while also elevating Ferguson even further as a top contender in the UFC lightweight division.

Chris Weidman and Ronaldo “Jacare” Souza will go down as two of the greatest UFC middleweights to ever step foot in the Octagon. Weidman will forever be known as the man who defeated Anderson Silva twice, and he went on to compile the second-best UFC middleweight run thus far in UFC history. Jacare is a Brazilian legend who continues to fight at 40 years old and has consistently faced top-level talent since his UFC debut in 2013.

After suffering a three-fight skid, Weidman bounced back with a submission win over Kelvin Gastelum in July 2017 and was slated to rematch Luke Rockhold in the co-main event slot at UFC 230. Unfortunately, Rockhold suffered an injury two weeks prior to the event and was replaced by the longtime middleweight contender Souza.

It was somewhat unbelievable that it had taken Weidman and Jacare so long to finally meet in the Octagon. They had been top contenders for several years and were consistently fighting fellow contenders year around. Thankfully, the change in opponent led to one of the year’s most memorable middleweight striking wars — one that stole the show at UFC 230.

The bout took place mainly on the feet, where Weidman displayed his improved striking. He utilized his jab and looping left hook to consistently land and control the distance. Souza remained patient and used his athleticism and sheer power to explode and attack the longer and younger Weidman whenever the opportunity presented itself. Going into the third round, most viewers had the bout two rounds in favor of Weidman. Weidman’s striking and footwork visibly impressed Joe Rogan, who commented that this was the best striking Weidman had displayed in the entirety of his career.

Jacare entered the third round sure that it would take a finish to ensure a victory after being outworked in the first two frames. At the midway point of the round, he began his attack and rushed Weidman with a flurry of right hands, knees and powerful punches. Eventually, Souza landed a left body hook that visibly hurt Weidman and followed up with a looping overhand right that landed on the left side of Weidman’s skull to send him flying to the canvas. Jacare restrained any further attack and gave the referee the opportunity to stop the fight, but the official failed to do so. Instead, this gave Weidman the opportunity to grab a hold of Souza’s leg. Visibly upset, Jacare resumed his attack with two “forced” hammer fists to the side of Weidman’s head before the referee called the bout at 2:46 of the third round. Regardless of poor officiating, the bout earned “Fight of the Night” honors and became one of the most memorable striking battles in UFC middleweight history.