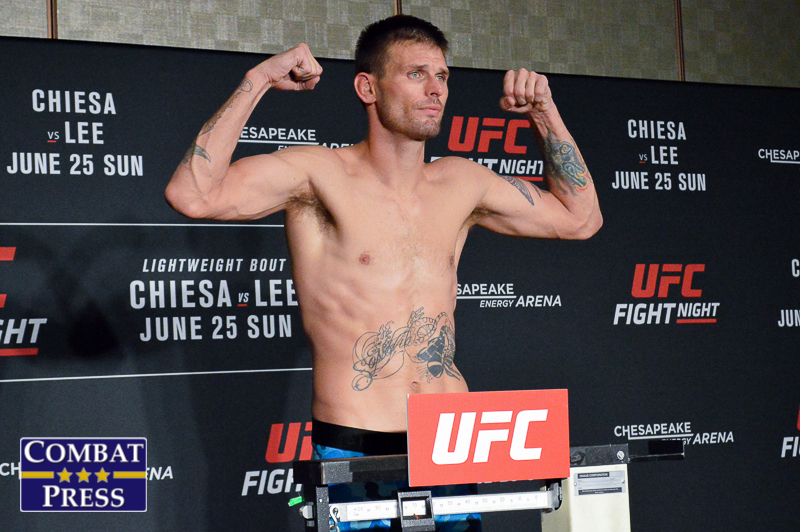 The loss of a child is one of the worst things that can not only happen to a family, but a community as well. Make it two kids — brothers — in a tight-knit community, and the loss can have a devastating ripple effect.

Moriarty, N.M., sits about 40 miles due east of Albuquerque on the other side of the Sandia Mountains. It’s a town of less than 2,000 people. It’s home to professional mixed martial artists John Dodson and Tim Means. Means is very involved in the small community. His kids are active in the local sports scene there. Last month, while the two men were preparing for their upcoming fights at UFC on ESPN+ 25 in nearby Rio Rancho, tragedy struck their small town.

“Mateo and Pete Sandoval were on their way to school for a lifting practice,” Means told Combat Press. “They had a head-on collision with another man and family we are very familiar with in the community. Mr. [Roman] Armendarez walked away, but it killed Pete and Mateo.

“It hit the community pretty hard. I dedicated this fight to the families, and they will be there ringside. I learned a lot from those boys and knew them since they were real little. Pete was going to be a senior next year, and Mateo was a freshman going on to sophomore. It was a trying time.”

Means has had plenty of adversity in the last year. In March 2019, he faced Niko Price at UFC on ESPN+ 4 in Wichita, Kan. After a vicious first round of trading strikes, Price landed a big shot with only 10 seconds left in the round. When Means fell back, his leg and ankle snapped. He was unable to get up and ended up suffering the TKO loss.

After a lot of recovery time, Means was able to bounce back in December with a first-round submission of Thiago Alves. He was then lined up to face Ramazan Emeev in Rio Rancho. The fight was slated for this weekend, but it fell apart.

“I heard from those guys that they never agreed to take any fight,” Means said. “So, I had my information, and I took a screenshot of the bout agreement with my name on it. The local news here announced the fight, so I started getting ready. A couple weeks later, we heard that he was not going to fight. It wasn’t until Saturday [Jan. 25] that I got an opponent. I just tried to say focused, and I’m ready to go.”

The accident happened between Means finding out he had no opponent for his homecoming fight and a new opponent — Daniel Rodriguez — eventually being secured. Last year might have been rough, but the last month has been a lot tougher. However, it provides a ton of motivation for Means going into the weekend.

“We had our own tragedy here in the last few weeks — burying two of our football players that we knew real well,” Means said. “I want to dedicate this fight to them and their families. My wife started a GoFundMe account that took off for the families in need. It’s just the right time to get in a fight, and a fight at home, so that’s cool.”

UFC on ESPN+ 25 takes place at the Santa Ana Star Center, which is just north of Albuquerque and about an hour drive from Moriarty. This will be Means’ first fight in New Mexico since a King of the Cage event in November 2011.

“I haven’t fought at home in a while — eight or nine years or so,” said the New Mexico resident. “I’m excited to fight at home in front of our people. I get a kick out of fighting at home, and I’m excited for this one. I was excited well before the boys’ accident, but I’m even more excited now. It’s a great cause, and we have a great community that’s coming out to represent.”

Emeev would have been a great pairing for Means, and one that certainly would have moved the meter in terms of his standing in the welterweight division. Instead, he meets a promotional newcomer in Rodriguez.

“He looks to be a brawler,” Means said. “He doesn’t look like a guy that I’m going to have to go find. Left-handed. Long reach. [He’s] a guy that’s hungry to show where he’s at in the UFC and that he belongs there, so I’m expecting a good fight.”

With only 10 of his 42 pro matches going to decision, Means tends to give fans an entertaining fight. Rodriguez is 10-1, and he, too, has a habit of finishing fights. He has stopped his opponent in nine of his victories. His only loss was a split decision. This fight could very well shape up to be a “Fight of the Night” candidate.

“This past year, I did all the recovery and rehab to get my leg going,” Means said. “I’ve been working with Heather Linden and the whole [UFC Performance Institute] unit to help me get through that process. I learned a lot about tendons and ligament, and bone and cartilage through that. I learned a lot in the last year.

“In 2020, we want to get this going in a different direction. It’s been a crazy last few weeks, a lot of things have gone down already, and I’m looking to hit the ground running here in February. This is going to be a violent fight. A lot of emotions [are] running high on this fight. We just buried two family members, and this is going to be a fight that’s going to be violent.”