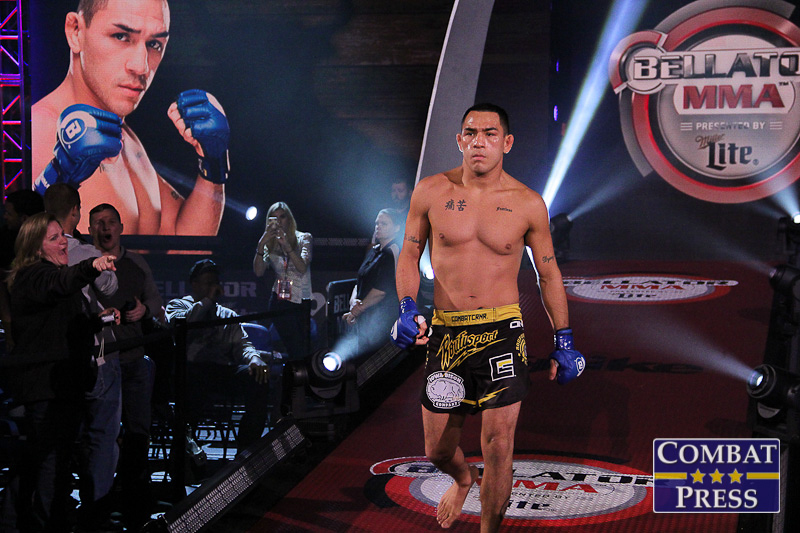 Bellator MMA returns to the WinStar World Casino in Thackerville, Okla., for Bellator 218.

The card is headlined by a featherweight battle between two of the top 145-pound fighters on the roster. Emmanuel Sanchez is coming off a loss in his last fight, where he tried unsuccessfully to take the featherweight belt from Patricio “Pitbull” Freire. He fought hard, but ultimately lost the fight by unanimous decision. His upcoming foe, Georgi Karakhanyan, also suffered a loss in his last appearance under the Bellator banner. Karakhanyan came up short against Henry Corrales, but he has gone on to win one fight outside of Bellator.

Two additional fights round out the main card. At middleweight, Anatoly Tokov looks to earn his 28th victory when he goes up against UFC veteran Gerald Harris. Also at 185 pounds, Mike Shipman faces Hracho Darpinyan.

The last time Emmanuel Sanchez and Georgi Karakhanyan fought, the contest ended in a majority verdict favoring Sanchez. Can we expect a more dominant showing from either of these men in this go-around?

A more dominant showing? Probably not. Both of these fighters are pretty equally matched and excel in most of the same areas. This fight will be close, again, and it will be a well-earned victory for the fighter that can get the decision.

Sanchez’s nod over Karakhanyan was the first of four straight wins for the eventual featherweight title challenger. Sanchez always seems to get the nod in close fights, and this one was no different. If anybody is going to have a more dominant showing in this fight, it’s going to be Sanchez. In their first affair, Sanchez did a great job winning rounds one and two, but a point deduction for an illegal knee was enough to make the fight much closer. Sanchez also seemed to take his foot off the gas in the third frame, which allowed Karakhanyan to walk away with the round.

Karakhanyan won the third round on the ground, where he was able to outgrapple Sanchez. The longtime Bellator veteran has some slick submissions that can end a fight, and he also has great top control. Sanchez is a pretty well-rounded fighter and has a lot of avenues to success, but a repeat of that third round would put him in a lot of danger of not only dropping a decision, but possibly not even making it to the judges’ scorecards.

Sanchez should be able to keep this one on the feet for the majority of the fight, though, much like in their first fight. However, it won’t be a more dominant showing. This is a close match-up that is destined to end up going two rounds to one in someone’s favor.

Valentin Moldavsky has had a strong run so far under the Bellator banner. Is this heavyweight fight against longtime 205-pounder Linton Vassell a gimme fight for the Ukrainian prospect?

It’s hard to look at Vassell and dub him as a gimme fight for anybody. He has been a tough out for a lot of his peers in Bellator’s light heavyweight division. Prior to his current two-fight skid, Vassell had beaten Emanuel Newton, Liam McGeary and Francis Carmont. The first two men on this list are former Bellator light heavyweight champions and the latter is a former UFC fighter. His two recent losses came against Phil Davis, now a former Bellator champ, and Ryan Bader, who rules over two of Bellator’s divisions.

Vassell isn’t going to go down easy. The 35-year-old can still put up a fight, especially if this one hits the ground. Prospects make mistakes. It happens. It’s inevitable. The question becomes whether Vassell can capitalize on the rookie mistakes Moldavsky makes. Moldavsky has lost before, and it wasn’t even to somebody of Vassell’s caliber. The Ukrainian is actually three inches shorter than Vassell, who is a big light heavyweight who could benefit from the move up in weight that doesn’t force him to drain his body to make 205 pounds.

Moldavsky’s best chance to win will come on the feet. Heavy punches might spell disaster for Vassell, who has been knocked out in his last two fights. Moldavsky is coming off a knockout victory in his last fight against Ernest James. If he can close the distance, throw some short punches, and make this fight dirty, then he has a chance to get the knockout and earn a huge victory.

This is no gimme. It’s a huge test. It’s entirely plausible that Vassell could beat Moldavsky and start to make a name for himself in his new division.

Macapa has been a really exciting fighter throughout his Bellator tenure. He is currently on a three-fight skid, but most of his Bellator outings have been closely contested decisions. He dropped decisions to Daniel Weichel and Pat Curran, both of whom are among the best Bellator has ever produced. His loss to Weichel was even a split decision. Macapa can take anybody to task. Croom has lost more than he’s won recently, but his fights have been entertaining. Croom should be able to push Macapa in this one.