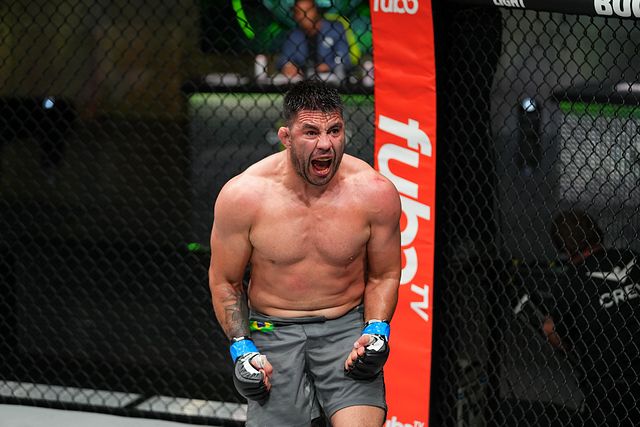 In picking these prospects, I’ll try my hardest to stay away from fighters who are currently in top organizations, such as Bellator or the Professional Fighters League, but a couple may pop up. In the past, I’ve had some great picks on the list, and some that haven’t worked out. Below are the previous year’s selections, followed by the five men the UFC should offer roster spots to in the coming year.

Kicking off this year’s prospect’s series is Adam Bogatyrev, one of many Russians you will see in this series. The combat Sambo champion is a guy with a tough strength of schedule through 12 fights in his career that has been a tough out for all he’s fought and has some marquee wins.

Like many Russian mixed martial artists, Bogatyrev is heavily reliant on his wrestling, which is the blueprint to his success. He does have some decent striking as well, mostly from a power perspective. After a three-fight losing streak to top Russian heavyweight talent that ended in 2020, Bogatyrev has put together a three-fight winning streak with knockouts of UFC vet Raphael Pessoa and Geronimo dos Santos, as well as a convincing decision over UFC vet Daniel Omielanczuk.

Bogatyrev is 27 years old and continually improving. As stated, he’s shown he can defeat UFC veterans and do so in convincing fashion. He is clearly a guy that could step onto the UFC roster tomorrow and compete with most of the division.

Staying in Russia, the next heavyweight prospect that the UFC should ink to their promotion is Rizvan Kunive, a guy who should be familiar with the UFC brass. The Contender Series vet eventually ended up on the Eagle FC roster, where he’s been able to continue his MMA journey.

Kuniev has a kickboxing background, but he’s also shown to be a competent submission grappler. For a guy his size, he’s a very good athlete and moves like a guy who is lighter than heavyweight. He fought just once in 2022, where he used a quick guillotine choke to put away UFC veteran Anthony Hamilton in what was a very impressive performance. That was a follow-up to his 2021 Contender Series win over Edivan Santos, where Dana deemed his performance not good enough for a UFC contract.

It’s a shame the UFC passed up on Kuniev last year, but they can make up for that by bringing him in as soon as possible. He’s more than UFC ready and could help provide depth to a division constantly in need of said depth.

When it comes to heavyweights outside of the UFC, Marcelo Nunes might be one of the best BJJ practitioners not rostered. He’s been very successful as a mixed martial artist as well, which is why he should be a guy the UFC has their eye on.

A Brazilian jiu-jitsu black belt, Nunes is outstanding on the mat. In addition to having a number of top-level professional grappling matches, Nunes has been a terror in the cage, including in 2022. He started off his year by choking out UFC veteran Bevon Lewis in the PFL Challenger Series before doing the same to Contender Series veteran Dylan Potter at a later PFL card.

At 33 years old, Nunes’ window for getting into the UFC is closing more quickly than other younger guys. That said, he definitely has the skills to make it in the UFC and could win a number of fights right now.

For the second year in the row, Russian powerhouse Oleg Popov makes this list, as he’s a heavyweight that is clearly ready for the big leagues. The big, athletic heavyweight has a strong resume and skill set to make it at the next level.

Popov is a feared striker with solid wrestling and underrated submissions. He is a one-shot knockout artist that has especially good hands and has won most of his fights via knockout. After a busy 2021 where Popov went 5-0, he fought just once in 2022. However, it was a major name victory that added to his resume, as he downed Antonio “Bigfoot” Silva with another devastating knockout.

Popov is just 30 years old, so he’s clearly in his prime right now. That means he will never be more ready for the UFC than this phase of his career right now. He hasn’t lost since his third fight in 2016, and since then, has really impressed against recognizable talent. He’s been linked to Bellator, but either way, he’s a guy I want to see challenge the more skilled UFC heavyweight roster.

The UFC heavyweight roster currently has Kiwi Justin Tafa in its ranks. His brother, Junior, is a top heavyweight prospect in his own right, as the tough, rugged striker has spent his combat sports career knocking dudes out and putting on bangers.

Tafa’s background is in kickboxing, cutting his teeth with GLORY Kickboxing. He has insane stopping power in his hands and legs, as well as impressive athleticism for a man his size. His MMA career is more limited, though he was linked to participate in last year’s Contender Series – though, it never materialized. Regardless, Tafa went 3-0 in 2022, scoring a 66-second knockout in his MMA debut over Taisei Sekino. That was followed up with a body-punches knockout of 30-fight veteran Kelvin Fitial. Finally, he knocked out Nicolas Djurdjevic to earn that third win of the year. Tafa also won a pro boxing bout in 2022 as well.

Tafa has the combat sports background and would be among the most feared strikers in the UFC heavyweight division if signed. One can’t think he’s far off, especially seeing as the UFC has been signing more guys with kickboxing backgrounds in recent years. That said, he appears to have a bout on Rizin’s New Year’s card, so if he can score that win, he should get the nod.