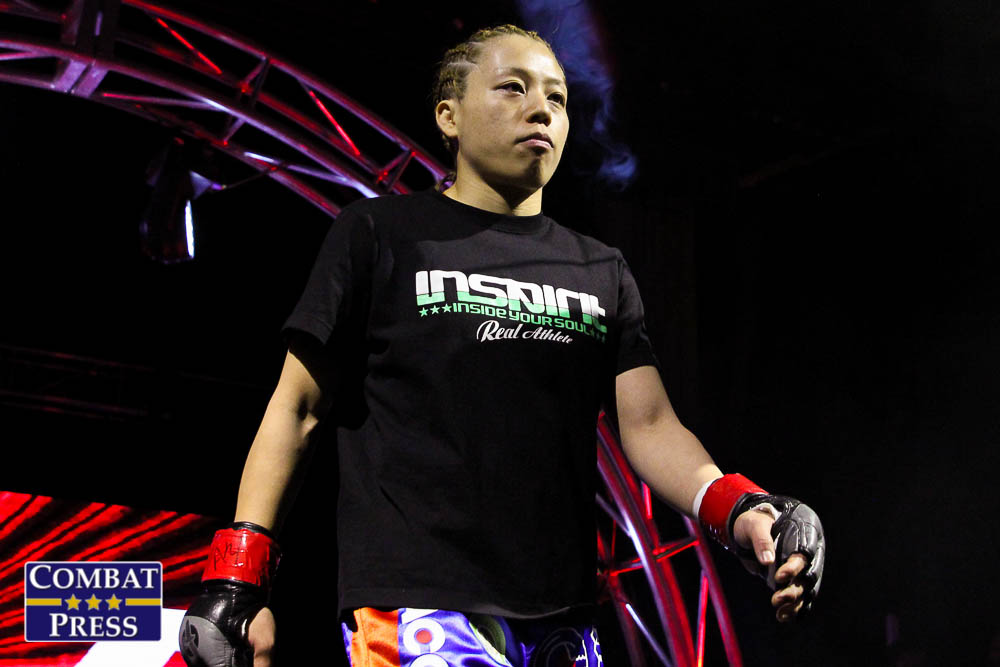 Rubenilton Pereira expected a rematch with M-1 lightweight champion Damir Ismagulov, but Ismagulov vacated the belt when he was signed by the UFC. Now, at M-1 Challenge 97, Pereira gets a crack at the vacant gold when he meets undefeated prospect Roman Bogatov.

Pereira, a 25-fight veteran, suffered a prior loss to the aforementioned Ismagulov as part of a four-fight skid that lasted from mid-2015 through early 2017. Outside of those four consecutive defeats, the Brazilian has only lost once, earlier in his career, to Bruno Lobato. The setback against Lobato came after Pereira had won five straight, beginning with his 2010 debut. “Rubinho” rebounded from the Lobato loss to score 11 straight victories and avenge the loss with a first-round finish of Lobato. His streak was snapped when he stepped up to face tougher competition and dropped bouts to Alexander Butenko, Ismagulov and two formerly undefeated up-and-comers. The 25-year-old has righted the ship with four straight wins, all against competition that hold respectable career marks.

Bogatov’s pro career kicked off in 2016 with a win over a sub-.500 opponent, but most of his adversaries have sported solid records. He has handed two pro fighters their first career losses, and he also scored decisions against veterans Jani Salmi and Raul Tutarauli. Bogatov is a skilled grappler who has registered four victories by way of submission.

Pereira has eight submission wins of his own, but he also has five victories via some form of knockout. Meanwhile, the Brazilian has only ever lost on the scorecards. The 25-year-old has faced some strong competition in his lengthy career, but he has rarely managed to emerge with the win in these fights. That could be a major concern against Bogatov, who has impressed early in his pro run.

Bogatov’s grappling chops should give him an upper hand against Pereira. There won’t be a finish in this one, but Bogatov should score enough points to take the nod from the judges.

The Legacy Fighting Alliance’s 51st venture could prove to be a huge audition for bantamweight up-and-comer Gustavo Erak. Erak is riding an eight-fight winning streak, and now he gets the chance to prove he’s a legitimate prospect when he meets UFC castoff Cody Gibson in a featured bout for the LFA’s trip to Fresno, Calif.

Erak has been fighting professionally since 2011, when he made his debut in his native Brazil with a decision win over Vagner Pereira. This sparked a streak of seven victories to launch his career. The Team Nikolai MMA fighter ran into trouble in back-to-back fights, however, and dropped decisions to Guilherme Faria and Otto Rodrigues. The 26-year-old bounced back for a stretch in which he added four wins, a draw and a no-contest. In 2015, he stumbled again in a knockout loss to Roberto de Souza. This marked his last defeat before his current streak, in which he’s mostly fought low-level competition. His most notable victory was a second-round knockout of the previously undefeated Wellington Kakaroto. Overall, Erak has 12 knockout finishes.

Gibson will be the more familiar face to U.S. fans. “The Renegade” had a four-fight stint with the UFC, but he only managed one win in that stretch. The Tachi Palace Fights regular turned pro in 2008 and made his debut under the Gladiator Challenge banner before moving to Tachi. He won five of his first six fights, including a knockout finish of fellow future UFCer Walel Watson. The two-time junior college All-American wrestler hit a rocky patch in which he suffered losses to future UFC fighter Ulysses Gomez and WEC veteran Casey Olson. Gibson added another six-fight winning streak that included a Titan FC win over Andrew Whitney and a submission finish of future Bellator fighter Chad George. Gibson then joined the UFC, where he lost to Aljamain Sterling, Manny Gamburyan and Douglas Andrade. Gibson’s only Octagon win came against Johnny Bedford. After departing the UFC, the 31-year-old added three victories before a recent loss to Adrian Diaz in a Tachi featherweight title bid.

Erak is a strong striker, but he hasn’t proven himself on the mat, where he has only picked up one submission win. The Brazilian might face a stiff test in Gibson, who has never been knocked out. Gibson’s weakness tends to come on the mat, where he has suffered four submission losses. The UFC castoff also has a more balanced finishing rate that includes six knockouts and three submissions.

Gibson, despite his numerous setbacks, is still a giant leap for a Brazilian fighter who has fed primarily on very inexperienced foes. Many of Erak’s opponents have seven or fewer fights, and this set of opponents often have hovered around the .500 mark. Erak is going to struggle against the wrestling of Gibson, and he might not have enough offensive grappling savvy to snag a submission from his back. If Erak can get past Gibson, he’ll make a huge statement about his level of skills. More likely, however, is that Gibson uses his wrestling to neutralize the Brazilian before finishing the fight with strikes.

Hamasaki is one of the most accomplished atomweight fighters on the planet. The judo black belt has won titles under the Jewels and Invicta FC banners. The Abe Ani Combat Club fighter has trained alongside fellow women’s MMA legend Megumi Fujii, as well as Hiroyuki Abe and Josh Barnett. Her list of victims includes Seo Hee Ham (twice), Mizuki Inoue, Yuka Tsuji, Lacey Shuckman, Emi Fujino, Naho Sugiyama, Mei Yamaguchi, Herica Tiburcio, Amber Brown, Jinh Yu Frey and Alyssa Garcia. The former Jewels strawweight champ has only lost at the 115-pound level, where she was dropped by Claudia Gadelha and Livia Renata Souza. Hamasaki left Invicta as the promotion’s atomweight titleholder, but she now appears to be a fixture back in her homeland with Rizin.

Kurobe, 41, is a late bloomer as an MMA fighter. The Master Japan product, who has a background in grappling, debuted in December 2012 at the age of 35. She won her first five fights, including three by way of rear-naked choke submission. Her victories, however, came primarily against opponents who currently sit right around the .500 mark. When she stepped up to face the aforementioned Yamaguchi, Kurobe fell on the scorecards. Her next fight, which came against the aforementioned Sugiyama, also ended in disappointment when the scorecards were read. Kurobe regained her confidence with wins over MMA newcomers Hana and Renju Date, who had a combined 1-0 mark when they clashed with Kurobe. The Deep Jewels mainstay then stepped it up and scored significant wins over veterans Tomo Maesawa and Saori Ishioka. She then rematched and defeated Sugiyama for the Deep atomweight strap. After a time-limit draw with fellow MMA fighter Emi Tomimatsu in a grappling match, Kurobe was knocked out by the aforementioned Ham in a Road FC title bid in South Korea. She has since returned to the Deep and Deep Jewels organizations to add victories over Jung Eun Park and Satomi Takano. This bout will mark her first venture into the Rizin ring.

Kurobe has had an excellent start to her career, but her losses are a sign that she has possibly reached her ceiling. Despite her grappling acumen, Kurobe has scored just three submissions. She has gone the distance in eight of her victories. Her defeats have come at the hands of top-10 atomweight fixtures Yamaguchi, Sugiyama and Ham. Beyond a victory over Sugiyama in the pair’s rematch — it was also Sugiyama’s farewell bout — Kurobe’s most notable wins have come against fringe top-15 atomweights like Maesawa (twice), Takano (twice), Tomimatsu, Ishioka and Park.

Hamasaki can be overpowered and outmuscled at the strawweight level, but she hasn’t displayed the same vulnerabilities as a 105-pounder. While she has won belts at both weights, she essentially never lost either piece of gold through combat. Hamasaki’s judo background and grappling chops should allow her to avoid the biggest strengths of Kurobe’s game while implementing her own offense. This is likely to go the distance, and the 36-year-old Hamasaki should end up with her hand raised when the dust settles.