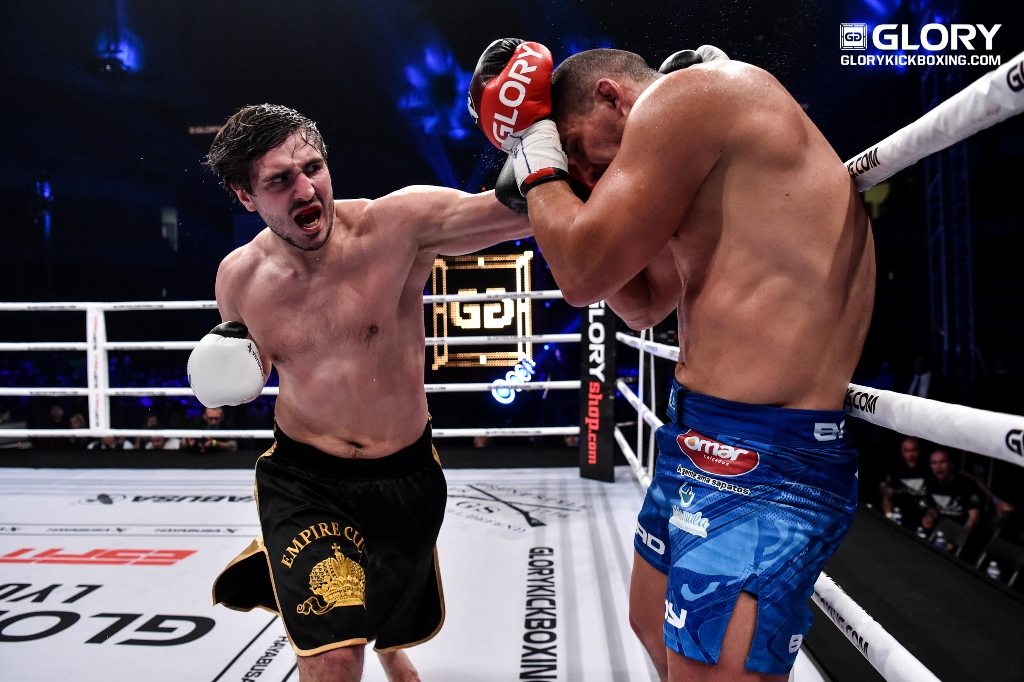 On Friday, Aug. 10, GLORY Kickboxing returns to the 1stBank Center in Broomfield, Colo., for the first time in nearly two years, for GLORY 56: Denver.

In the night’s main event, one of the world’s pound-for-pound greats, Artem Vakhitov, defends his GLORY light heavyweight title against resurgent contender Danyo Ilunga, who has won two straight under the GLORY banner. Vakhitov will enter the ring on a six-fight winning streak that includes two victories over former GLORY champ Saulo Cavalari, knockouts over top-10 middleweight Loren Javier Jorge and former top-10 light heavyweight Zack Mwekassa, and a 2015 victory over Ilunga at GLORY 25.

The night’s SuperFight Series card is headlined by a pair of former GLORY middleweight champions. Simon Marcus and Jason Wilnis meet for the fourth time. The winner could potentially secure another fight with current GLORY kingpin Alex “Poatan” Pereira.

Danyo Ilunga has created a career resurgence of sorts with his past two victories in GLORY. Can he get redemption against Artem Vakhitov, or is the champion truly one of the greats in the sport today?

Ilunga began his kickboxing journey in Germany after his family emigrated to the country to escape the political strife of his homeland of the Democratic Republic of the Congo. He found success early in his career under the watchful eye of Asmir Burgic and, eventually, K-1 legend Remy Bonjasky. The former It’s Showtime 95-kilogram champion looked unstoppable early in his career. He quickly rose up the GLORY rankings when he knocked off Ali Cenik, Dustin Jacoby and current top-10 kickboxers Stéphane Susperregui and Mourad Bouzidi. Despite eventually falling short against Tyrone Spong in the finals of a 95-kilogram GLORY tournament, Ilunga did pick up victories over former top-10 fighters Andrei Stoica and Michael Duut. However, a decision loss against eventual champion Saulo Cavalari at GLORY 18 kicked off a five-fight skid for Ilunga inside the promotion, including a 2015 loss against the current champ.

The 31-year-old Ilunga will enter the ring on Friday night on the heels of two straight wins in GLORY’s light heavyweight division. Following a losing effort in a 2016 “Fight of the Year” candidate and Combat Press “Combeback of the Year” award-winning bout against the aforementioned Duut, Ilunga capped off their trilogy with a strong performance that led to the Congolese-German kickboxer putting a stop to Duut in the final moments of the third round at GLORY 49. Ilunga won back-to-back fights for the first time since 2014 when he wouldn’t let Englishman Fraser Weightman have any space in their three-round affair at GLORY 54. Despite facing resistance from his hometown opponent, Ilunga clearly dominated the majority of the exchanges with his relentless pressure, a trait that has led to 60 career victories, including 45 by way of knockout. Ilunga pushed himself so far up the GLORY rankings that he earned a title shot against the returning GLORY light heavyweight champ Vakhitov.

Vakhitov makes his return after recovering from hand surgery to address a nagging injury. Now that the Russian Muay Thai specialist is fully healed and ready to go, he can build upon the six-fight winning streak he began against Ilunga at GLORY 25. After the victory over Ilunga, Vakhitov dispatched of Loren Javier Jorge with two beautiful jabs for the second-round knockout. He continued his winning ways against the aforementioned Cavalari to capture the GLORY light heavyweight gold with a unanimous decision at GLORY 28. Vakhitov hasn’t looked back since capturing the belt. The champion defended his title three times in fights where he dropped his opponent in each bout, including multiple knockdowns against Zack Mwekassa and Cavalari that led to TKO stoppages. He put on a masterclass of technical striking in his dominant title defense against top-10 kickboxer Ariel Machado at GLORY 47 to catapult into the pound-for-pound rankings.

A victory over Vakhitov would be massive for Ilunga, who has been searching for a big opportunity to turn his fortunes around. In their first meeting, Ilunga came right after Vakhitov with his trademark pressure, left hook, step knee and low kicks. He found success with his forward movement for much of the contest. His unwillingness to take a backward step and his beautiful use of the jab kept Vakhitov from going into terminator mode. Ilunga was the more active fighter throughout the three rounds, which forced Vakhitov to fall back on the clinch and take bigger risks when exchanging inside boxing range. However, the most significant damage in the fight came in the first round, when Vakhitov was able to finally push Ilunga back and land a series of hard punches that had the challenger stunned before the bell.

Ilunga seems confident heading into his title opportunity despite losing their first meeting. He was banged up heading into the first fight, which he says took time away from his training. The challenger laid out his game plan in a recent interview, saying that the best way to neutralize Vakhitov’s offense is to take away his space. Ilunga attempted this approach in the first fight with moments of great success behind his immense pressure, solid boxing and activity with his kicks and knees. He will need to put all of the pieces together in this rematch if he hopes to dethrone the light heavyweight king.

Vakhitov’s success is partially the result of his ability to change the way he approaches the game during his fights. He is capable of fighting in a multitude of ways, including everything from forward pressure behind a jab and high guard to finding his range and using head movement and footwork to open up his punches. Vakhitov’s ability to change what his opponent sees gives him more areas of opportunity — counter punching, a stellar boxing-to-low kick game and tremendous power from textbook boxing to spectacular high kicks, body punching and a sublime kickboxing flow. Vakhitov makes himself a hittable target at times, but his sheer output and technical ability give him room to take some risks and still put on a terrifying pace that usually breaks his opponent.

Ilunga is right that he will need to keep Vakhitov moving backwards. The opponents that have found the most success against the champ have kept him at bay by throwing back in bunches and staying off the ropes. However, those fighters could only survive with that tactic for so long. Vakhitov’s durability allows him to out-pace his opposition. Vakhitov’s technical boxing game, diversity of shot selection and high output of strikes must be apparent in this fight, otherwise Ilunga will find pockets of success, especially with his step knees behind his boxing and low kicks. Vakhitov has never been knocked down in the GLORY ring, however, which makes this an uphill battle for Ilunga against one of the best kickboxers on the planet.

Menezes gets her chance for redemption against Meksen in her return to GLORY. Menezes welcomed Meksen to the promotion at GLORY 43 following her own promotional debut against Brazilian Muay Thai champion Raquel dos Santos at Road to Glory: Brasil. Unfortunately for the Brazilian, Meksen kicked off a five-fight winning streak inside the promotion, including a championship victory over former titleholder Tiffany van Soest to win the GLORY women’s super bantamweight belt. Meksen will attempt to defend the crown for the second time on Friday evening in Denver. Her first defense came against France’s Amel Dehby at GLORY 53.

The first fight between Meksen and Menezes didn’t go as planned for the now 26-year-old challenger. With 12 wins and two defeats, Menezes has a mere seventh of the experience of Meksen. Despite her lack of experience, Menezes certainly adheres to her Chute Boxe lineage with an exciting, non-stop, brawling style of fighting. She trains out of Team Hemmers Gym in Curitiba, Brazil, under head coach and experienced Muay Thai fighter Julio Borges. Her fighting style is a blend of Dutch kickboxing from Borges’ time spent training at Hemmers Gym in the Netherlands and his aggressive Chute Boxe training background. Menezes is an all-out bruiser who will throw down with even the best fighter in the world, as evidenced by her first meeting with Meksen.

Menezes is rather predictable in her movements. She very rarely takes a backward step, even if she’s getting popped in the face with a teep kick. Menezes presses forward with a strong right hand, wild hooks and a hard right low kick. She doesn’t close distance with anything other than her right hand, an occasional teep and, inevitably, her face. Menezes doesn’t ever really cut off the ring, either. She presses forward with multiple strikes in the hopes that one of her punches will be the one that scores. When left out in the open for too long, her lack of movement is exposed.

When Meksen used her footwork and shifting stances in their first encounter, she was able to easily outclass Menezes. Meksen was able to set up her diverse array of kicks, knees and counter punching that continued to score for her throughout the three-round fight. It was only when Menezes was able to push Meksen against the ropes without an escape route that the Brazilian had her best success in the contest.

In Meksen’s recent match-up with Ashley Nichols at GLORY 52, her Canadian foe was able to find some success with her forward pressure when she started stringing combinations together. However, Nichols was far more willing to engage in the clinch than Menezes, who would rather just throw bombs on the inside. This could spell more success for the Brazilian if she is able to avoid the type of damage she sustained in the first meeting. Menezes ate an astonishing 166 strikes in nine minutes, but she wasn’t going to stop pressing forward.

Meksen capped off the dominant victory when she busted Menezes up late in the third round with repeated counter combinations. Meksen was then able to find the space to continue to avoid her opponent’s strikes while landing multiple combinations and expertly switching stances, throwing sharp counters and finding a home for her diverse array of kicks, including her front kick, teep, side kicks, low kicks and lightning-quick shots to the body and head. Meksen’s superb ability to use her footwork to not only attack with great variety, but to defend oncoming strikes and avoid any heavy damage has led to success in her 96 career wins. The world’s best female fighter and 2017’s Combat Press “Fighter of the Year” will once again showcase her skill at the highest level against another difficult challenger.