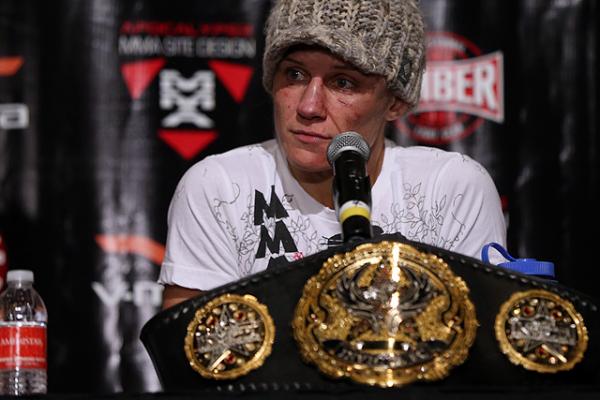 Observations in Women’s MMA: UFC Boise and the TUF 27 Finale

Over the last couple of weeks, the UFC has served up several significant fights that have had an impact on the women’s bantamweight, flyweight and strawweight divisions. Here are the key stories to come out of these recent events, including The Ultimate Fighter 27 Finale and UFC Fight Night 133.

No Country for Old Women

Barb Honchak was named as one of the contestants on the flyweight season of The Ultimate Fighter. She was considered to be one of the favorites. As the former No. 1 flyweight in the world, Honchak was considered a shoo-in to make the finals and a strong candidate to leave the tournament as the champion. Neither scenario came to fruition, however, as she was knocked out of the competition by MMA neophyte Nicco Montaño. In her next fight, Honchak dropped a split decision to Lauren Murphy. At the TUF 27 Finale, Honchak suffered a decisive stoppage loss to Roxanne Modafferi.

Honchak is a good fighter. She has a fairly balanced skill set. She is well conditioned, experienced and tested at the highest levels. However, she isn’t a particularly standout athlete. This flaw wasn’t an issue in her previous run, because she wasn’t facing top-end athletes or ladies with comparable or superior skill sets. Honchak was able to navigate her own limitations and extend, outhustle and outclass the majority of her opponents. These foes didn’t have the athleticism or physicality necessary to put Honchak into bad positions, much less keep her in them.

Honchak has the range of skills necessary to neutralize any offensive overtures, avoid bad spots and work her way out of these spots and into dominant positions that allow her to maintain control en route to decision wins. More importantly, Honchak has enough competency in each range to push back when a fighter tries to assert themselves and take the fight into a different range.

Unfortunately,the current state of women’s MMA doesn’t allow for much success when a fighter has only slightly above-average athleticism, no area in which they clearly outclass their peers and limited finishing ability. Honchak has been faced with the aforementioned Murphy, a world-class opponent who dropped down in weight, which resulted in clear physical advantages in durability and physicality. The former Invicta champion also ran into Modafferi, who held clear edges in her balance and depth of skill, experience and level of opposition. And then there’s Montaño, who has superior athleticism and conditioning.

Honchak is good enough to go rounds with these ladies. She’s good enough to expose their holes and limitations, too. However, she isn’t good enough to beat them. Given her age, Honchak, because of her lack of activity and the quality of opposition in her division, is very unlikely to change this trend.

Zingano went three years without a win after she was finished by Ronda Rousey in dynamic and somewhat humiliating fashion. She was extended and walked down by former TUF winner and top bantamweight competitor Julianna Peña. Then, she was bullied and outworked by newcomer Ketlen Vieira, who some would call “Zingano 2.0.” The time of Zingano as an elite fighter seemed to be at an end. Not only was she unable to win, but she was unable to compete often — she only had three fights in three years. Then she got the call to fight Marion Reneau, and everything changed.

Bantamweight is not a particularly deep division. Reneau’s athleticism sets her apart from the majority of the division, with the exceptions of Amanda Nunes, Holly Holm, Sara McMann and Zingano. Reneau is the gold standard in regards to athleticism. It’s this quality that allows her to navigate the limitations in her overall game, such as her wrestling and striking. When facing more seasoned or nuanced strikers, Reneau’s explosiveness has allowed her to quickly and decisively turn fights around, as she did with the high kick against Bethe Correia, or to defend grappling and wrestling attacks from superior grapplers long enough to assert her striking. Reneau is also able to use her own wrestling and grappling to get takedowns and finishes, as she did against Talita Bernardo and the aforementioned McMann.

Most of Reneau’s most impressive wins have come against opponents who were athletically inferior to her. When the athletic ability has been comparable, she has lost decisively. In Zingano, Reneau fought a big, strong and explosive fighter. Zingano isn’t the athlete she used to be — multiple surgeries and illness have robbed her of some of her dynacism — but she is still as dynamic as the elite in her division in spots. When Reneau’s athleticism is not a determining factor, she is a middle-of-the-pack bantamweight

One of the biggest holes in Reneau’s game is her inability to control where fights take place. She has consistently been unable to assert herself via takedowns. She lacks the footwork and striking necessary to work herself into range without being out-positioned, picked off and backed up by more seasoned strikers. This was highlighted when she fought Holm and Correia, who put on a clinic on the feet versus Reneau.

On the opposite end of the spectrum, Reneau lacks the diversity and refinement to generate enough offense to dissuade opponents from closing the gap and getting into position to attempt takedowns. She also lacked the technical depth and awareness to defend or counter takedown attempts. Many fighters who lack national or world-class wrestling chops have taken down Reneau and kept her down for extended periods of time. This was done by the aforementioned Correia and Bernardo. Zingano is a better athlete, a more experienced fighter and a better wrestler than either of those ladies. Zingano has been able to get takedowns and recover from takedowns against a better class of athlete and a better caliber of wrestler and mixed martial artist. Recent history has shown us that even a very good grappler can have a hard time against a grappling-savvy wrestler. Zingano fits this description to a T.

Furthemore, Zingano is a physical and punishing fighter. She can overwhelm her opponent with her strength. Reneau doesn’t like being bullied. Reneau enjoys a certain respect as a result of her own strength and athleticism. When it doesn’t exist, Reneau’s ability to assert herself offensively or on the counter drops off precipitously.

When you consider these factors, Reneau’s loss to Zingano isn’t shocking. The real shock is that her management chose to take this fight.

Jennifer Maia was considered one of the best fighters in the women’s flyweight division. She was brought into the UFC to become a legitimate contender and possibly a title challenger. Maia’s UFC Fight Night 133 opponent, Liz Carmouche, was supposed to be the fighter who allowed Maia to showcase her skills against an experienced, accomplished and success foil. The fight was meant to announce Maia’s arrival on the big stage. This was the plan, anyway. It didn’t work.

Carmouche isn’t on the same level with Maia as a grappler or a striker. Some would say she isn’t the athlete Maia is either. However, Carmouche is a very experienced fighter who has seen plenty of the biggest and best fighters at the bantamweight level, such as Miesha Tate, Valentina Shevchenko, Colleen Schneider, Alexis Davis, Lauren Murphy, Ronda Rousey, Marloes Coenen and Sarah Kaufman. It’s hard to match the poise, situational awareness and IQ a fighter develops after facing this caliber of opponent. Maia wasn’t going to show Carmouche a whole hell of a lot that Carmouche hadn’t seen before.

Carmouche, on the other hand, had something with which Maia hadn’t had a lot of experience: the size, strength and physicality that comes with facing top-ranked bantamweight fighters. Maia was able to hold her own with Carmouche. In spaces, Maia outworked Carmouche on the feet, setting a pace that allowed her to neutralize advantages Carmouche had in power and aggression. Once Carmouche got her hand on Maia, though, she was able to take down the UFC newcomer at will and consistently control and out-position her on the ground.

Carmouche, coming off a inconsistent run at bantamweight and a less-than-stellar showing in her initial fight at flyweight, has now put a stamp next to her name as a one to watch moving forward. Maia was considered a very big deal. Carmouche’s clear and decisive win over Maia makes her an equally big deal.