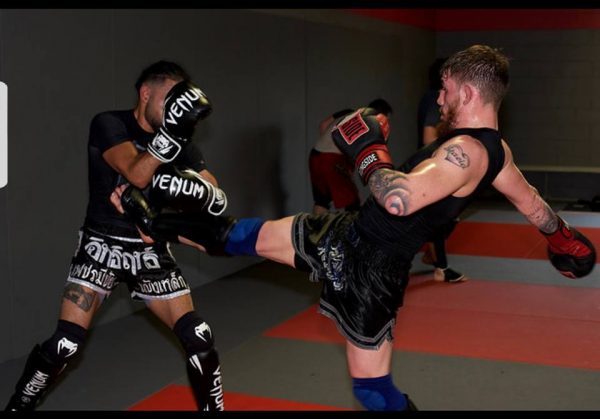 If you’ve never heard the phrase “happy wife, happy life,” that’s OK. It’s pretty obvious what it means. There isn’t really a husband version of the phrase that rhymes quite as well, but, whatever it might be, that’s the lifestyle Jake Heffernan lives today. He’s not actually formally married yet, but he lives with his “wife” Nakita and their one-year-old son Ronin.

Heffernan is also a full-time professional fighter and martial-arts instructor. He’s 5-0 as a pro and holds a brown belt in Brazilian Jiu-Jitsu from Gracie Barra The Woodlands, which is located north of Houston. Most importantly, he’s happy, and, in life, that’s what matters most. He attributes his happiness almost solely to his soon-to-be wife.

“I have an amazing wife, basically,” Heffernan told Combat Press. “She is the mother of my child, who will be one year old this month. I work at the gym that I train at, and I get to hang out with my son. My wife is a personal trainer at 24 Hour Fitness. She helps me with my strength and conditioning, and she’s also a nutritionist, so she helps me with my diet and my [weight-]cutting.

“Having someone like that in my life is an amazing step up in my fighter lifestyle. I get to go to work and train and get paid for it. My side job is also training, and I get paid for it. And my home life is a woman who completely commits a part of her life, not only to taking care of our son, but to helping me out as well. She’s also a trainer, so she takes care of herself and makes sure she stays in good shape. I live an amazing lifestyle and am truly blessed.”

Heffernan did not choose a fighting career at a young age. He wasn’t in taekwondo as a kid, nor did he have some lifelong wrestling career. His fighting life was borne out of goofing around with his buddies and evolved into something much bigger.

“Originally, it came from being with my friends, having a little fun, putting the four-ounce gloves on, and duking it out,” Heffernan said. “They would record them, and we would put them online and stuff. From there, I realized it was fun, and it was not something I shied away from — getting punched and kicked and stuff.

“Then, as I got into the workforce as an adult after high school, I got into a gym, but it was a different Gracie Barra with a focus on jiu-jitsu [and] kickboxing, and they had an MMA program. I did the full package and just really enjoyed the training. I had a passion for it, but I had to stop training for a while, [because] I had to work on getting on my feet from my child life to my adult life. From there, I went back to The Woodlands.”

Heffernan did not jump right into MMA competition. His fight life began on the jiu-jitsu mats. He’s also the kid’s BJJ coach at his gym, as well as one of the main coaches for adult BJJ and kickboxing. He has mostly trained under UFC veteran Alex Morono and Matt Wald, his striking coach. Now undefeated as a pro fighter over the last two years, the Texas native gives a ton of the credit to his team.

“It’s my work ethic, my training, and my dedication to my lifestyle of being a fighter,” Heffernan explained. “It’s definitely also the gym that I come out of and the guys I train with — Alex Morono and Matt Wald. They constantly break me down, and that’s where the 5-0 comes from. It’s the constant coaching and gym lifestyle.”

Heffernan’s first five pro fights were all in the Fury FC promotion in Texas. A couple months ago, he made a run at the big show. It didn’t happen the way he expected, but it led to his next fight — a headliner against Derek Brenon at Paramount MMA: Contenders on Friday night in Denver. He’s actually not really sure how they got in touch with him, but he is more than ready to put on a show.

“At the end of last year, I did tryouts for The Ultimate Fighter — for the undefeated season,” Heffernan said. “Things had gone really well and I thought I was going to make the show, but I ended up not getting the call. I had done a camp to get ready for the show, so I was in good shape.

“I called one promoter in Texas and told them I was ready to pick up a fight [on] short notice, and, literally, that same day, I got the call from somebody at Paramount, and they asked if I wanted this main-event spot, and I said yes. I didn’t even know who the opponent was. They said who it was against and when it was going to be, and I said yes. The date got changed, so I ended up getting to have a longer camp, which was good. I got to come up to the altitude.”

Brenon has made big waves in his young career. Currently sitting at 6-1 as a pro, he has only lost once in his combined pro and amateur careers. The defeat came in his last fight, which was for the Sparta Combat League featherweight title, in November against Justin Gonzales, whom Heffernan has faced in grappling competition. Brenon has been training in Colorado for about a year now.

“I know he’s a wrestler and he came from New York, and he has a really solid wrestling background,” said Heffernan. “I know he lives here in Colorado now, so he’s going to be a little more used to the altitude, and I know I have to look forward to that. Apart from that, he looks like a solid, well-rounded mixed martial artist.

“One thing I truly believe about having the lifestyle and career that I have is to constantly test yourself. At this point, from the guys that I’ve fought to the guys that I’m starting to fight, Brenon is just like the perfect step for the person that I’m supposed to fight next to get to that next level. He’s a great wrestler. He’s down to strike. He’s got the clinch ability. He’s got the ground-and-pound ability. I have all those things as well, so it’s one of those perfect match-ups where we’re going to see whose tools are sharpened better.”

Paramount MMA is putting on its Contenders event to stack the field for title fights later this year, and there could not be a more exciting match-up for the main event. Heffernan and Brenon are hungry killers, and this one could be brutal.

“I love fighting,” said Heffernan. “I love the entire essence of it. I love to get punched and punch them back, and always trying to get the one-up on strikes, takedowns and ground-and-pound. But I’m not one of those guys that wants to win the fight by pinning you down or getting just one more takedown than you. I want to use my takedown ability to make you counter-wrestle, so I can punch you in the face constantly. I think that aspect is what draws people in to watch fights. I’m always trying to have a knock-down, drag-out fight.”

With his soon-to-be wife and son just a phone call away for any assistance he needs, Heffernan is preparing for war. He could not do what he does without his support system. On Friday night, he is ready to make Nakita and Ronin proud. It really is a great life that this happy father is living.

Heffernan would like to thank all of his coaches and training partners, as well as Nakita and Ronin, his family, friends, fans, and sponsors: Steve Curry with Sky God Productions, Inked and Muscle Gang, and Loaded Pistols Apparel. Follow Jake on Instagram: @jakegbtw
Advertisement