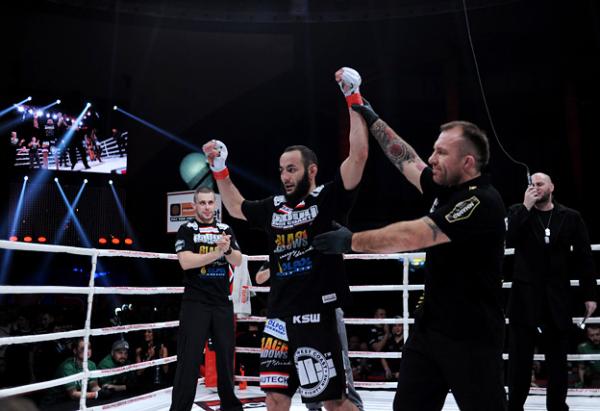 Out of Obscurity: ONE Championship, ACB 81 and RCC 2

ONE Championship’s card is perhaps the one event of the three featured in this edition of Out of Obscurity that doesn’t come with a dark cloud of controversy surrounding either the featured fighter or the promotion’s ties to human-rights abuses. With ONE, the focus is entirely on some excellent match-ups. While the battle between Aung La Nsang and Alexandre Machado for the vacant heavyweight title takes headlining honors, we can’t overlook the bantamweight clash that pits undefeated Japanese fighter Daichi Takenaka against South Korea’s Dae Hwan Kim.

Takenaka is a major acquisition for the ONE Championship promotion. The former Shooto featherweight champion joins the organization following a lengthy hiatus, though. The 28-year-old hasn’t fought since his June 2016 win over Alan Philpott under the Vale Tudo Japan banner. The Paraestra Izumi export debuted in 2012 and went the distance in his first three fights en route to a 2-0-1 mark. He’s only seen the scorecards twice in his subsequent eight outings. Meanwhile, Takenaka has notched four first-round submission finishes and two knockouts, including an 18-second destruction of Kosuke Eda in 2014. Other than the aforementioned Philpott, Takenaka’s only significantly notable opponent was Shoko Sato, a longtime veteran of the Japanese circuit who dropped a decision to Takenaka.

The 31-year-old Kim has been fighting professionally since 2008. “Ottogi” has seen far tougher competition than his counterpart, but he’s also suffered a couple of losses as a result. The Kukje Gym fighter ran up his own 10-0-1 mark before challenging Bibiano Fernandes for the ONE bantamweight title. Fernandes handed Kim a second-round submission loss, but the South Korean fighter rebounded to add two more victories before suffering his second setback in a decision loss to UFC veteran Leandro Issa. Kim’s most notable wins came in his first two ONE appearances where he submitted Thanh Vu and Kevin Belingon.

Takenaka has been talked up as the potential future of ONE’s bantamweight division — the 145-pound weight class, given ONE’s unique weigh-in rules — and a threat to the reign of the aforementioned Fernandes. Kim makes a perfect gatekeeper for the ONE newcomer. The South Korean’s recent victories look rather weak — Kim submitted a 4-2 LiGe Teng and a rookie Woo Gyu Kang — but this is a fighter who survived until the second round with Fernandes, went the distance with Issa and stopped both Vu and Belingon. Takenaka can prove a lot by topping someone who is very skilled on the mat and on the feet.

Takenaka was running through opponents before his layoff. He’s out to pick up where he left off, but Kim’s no easy return fight. The South Korean withstood submission attempts from world-class Brazilian Jiu-Jitsu practitioner Issa for three full rounds and has only been stopped by the elite Fernandes.

Takenaka’s strength is in his own submission prowess. The Japanese fighter likes to hunt for the choke. Fernandes stopped Kim with a choke, but it might be asking too much to expect the same from the former Shooto champ. Instead, this should be another affair where Kim is on the defensive against a top grappler. Kim is quite capable of outdueling Takenaka and handing the prospect his first career loss, but Takenaka should prevail in a hard-fought battle and earn the win on the scorecards.

We already know that ACB owner Mairbek Khasiev is far from being an honorable man, but unfortunately, it hasn’t stopped top fighters from flocking to his Absolute Championship Berkut promotion. The league’s 81st show delivers plenty of veteran fighters with strong records, including welterweight headliners Aslambek Saidov and Roan Carneiro.

Saidov, the cousin of KSW great Mamed Khalidov, hasn’t been quite as dominant as his middleweight relative, but the Polish welterweight has compiled a strong resume all the same. He started his career in 2008 and won his first five outings before stumbling in back-to-back fights against Attila Vegh and Vitor Nobrega. Saidov rebounded with a seven-fight winning streak before suffering his third career loss. The fighter’s next bout was a title tilt under the KSW banner. Saidov topped Borys Mańkowski to capture the crown. After winning two bouts as the champion, Saidov surrendered the belt to Mańkowski following a submission loss. The 33-year-old reeled off another four straight wins to earn a shot at the ACB welterweight title, but he was stopped by Bellator veteran Brett Cooper in the championship bout. Saidov has gone on to win his subsequent two outings. The Russian-born fighter has finished five opponents via submission and stopped five foes with strikes, but the majority of his 18 wins have come on the scorecards. He has been submitted twice and suffered two knockout losses.

Carneiro should be a familiar name to most American fight fans. The Brazilian fighter has has two stints with the UFC, but he has little to show for his efforts. His overall record inside the Octagon sits at 4-5. During his time in the UFC, “Jucão” scored victories over Rich Clementi, Tony DeSouza, Mark Muñoz and Kenny Robertson, but he also lost to Jon Fitch, Kevin Burns, Ryo Chonan, Derek Brunson and Ryan LaFlare. Outside of the UFC, the 39-year-old holds victories over such notable names as Matt Horwich, Jorge Patino and Brock Larson. He’s also tangled with the legendary Anderson Silva, veteran journeyman Fabio Nascimento and European vet Tommy Depret.

As is the case with his well-known cousin, Saidov’s determination to continue fighting in organizations like KSW and ACB has kept him from testing himself against the world’s best. He has, however, at least battled with legitimate opponents on a regular basis. Saidov’s list of victims includes former M-1 champions Rafał Moks and Yasubey Enomoto, Pride veteran Daniel Acácio, The Ultimate Fighter 25 winner Jesse Taylor, British journeyman Ion Pascu and TUF 21 alum Marcelo Alfaya. His stumbles against the likes of Cooper, Mańkowski and Morten Djursaa are troubling, though. Cooper’s a banger, but a very inconsistent fighter, and Mańkowski and Djursaa are far from dominant fighters either.

The 39-year-old Carneiro seems like another setup for a big name to add to Saidov’s record. Unfortunately, the Polish star doesn’t have the same edge in grappling that led him to his most significant victory to date, the submission finish of Taylor. If the fight hits the mat when Saidov locks horns with Carneiro, then the UFC veteran, a Brazilian Jiu-Jitsu black belt, holds a distinct advantage on paper. However, Carneiro also has a tendency to leave himself open to submissions. Fitch and Burns cinched up chokes on him, and Depret snagged an armbar finish.

Saidov’s striking is a far more serious threat to Carneiro. The Brazilian has been put away via strikes by Silva, Leonardo Nascimento and Brunson, and he suffered a TKO loss to Chonan as a result of an injury. Saidov could add to that knockout tally when the two meet.

The controversy surrounding RCC’s top fighter Ivan Shtyrkov pales in comparison to the despicable deeds of the ACB leadership, but it still serves as a dark cloud over a potential prospect. Shtyrkov has been the beneficiary of at least one controversial fight outcome. Yet, the heavyweight and light heavyweight up-and-comer has been fed plenty of other high-level opponents and continues to come out on top. Now, Shtyrkov takes on Marcin Łazarz, a former BAMMA light heavyweight champion.

Shtyrkov’s career has been spent competing under the German Titov Boxing Promotions and RCC Boxing Promotions banners in Russia. He’s faced several notable names along the way. After stopping his first five low-level foes since turning pro in mid-2015, “Ural Hulk” encountered UFC veteran Jeff Monson in May 2016. The Russian fighter landed a blow that sent Monson to the mat, where Shtyrkov finished the experienced grappler with an armbar in 31 seconds of the very first round. However, Monson has gone on record stating that he expected an exhibition fight and entered the contest with an injured arm that Shtyrkov eventually targeted for the finish. Shtyrkov topped his next two opponents, including former UFC champ Ricco Rodriguez, via first-round TKO. This led to a November meeting with UFC and Strikeforce vet Antonio “Bigfoot” Silva. The 28-year-old couldn’t stop Bigfoot, but he did earn the victory on the scorecards. Shtyrkov added UFC veterans Rodney Wallace and Phil De Fries to his list of victims. Then, he used his fists to pummel veteran Japanese fighter Satoshi Ishii for another stoppage victory. Late in 2017, he turned his focus toward the light heavyweight division and decisioned former Bellator champ Christian M’Pumbu.

Łazarz almost seems like a step down in competition for Shtyrkov. The Polish-born, British-based fighter’s biggest achievement is his short-lived reign atop the BAMMA light heavyweight division. After going 7-1 with his only loss coming against Max Nunes, “Bane” captured the BAMMA strap in 2015 with a decision victory over Brett McDermott. Less than seven months later, he relinquished the title in a submission loss to Paul Craig. It was the start of a rough patch for Łazarz in which he lost four out of six fights, beginning with the defeat at the hands of Craig. Łazarz suffered his other losses in this stretch to Maxim Grishin, Marcin Wójcik and Michał Fijałka. Most recently, Łazarz submitted Adam Kowalski under the Runda banner.

Shtyrkov might have been a smallish heavyweight, but he looks like he’s found a home at 205 pounds. Łazarz continues a list of opponents for the Russian prospect that largely features over-the-hill fighters and guys on the decline. At 35 years of age, Łazarz has some miles left on him, but he’s suffered more losses than wins lately. Some of those defeats haven’t even come to the best of opponents.

It’s difficult to overlook some of the shady dealings in Shtyrkov’s past, but the guy does keep putting up wins against legitimate opposition. Łazarz might be one of his easier tasks, too. Shtyrkov should add another knockout to what’s becoming quite the list.