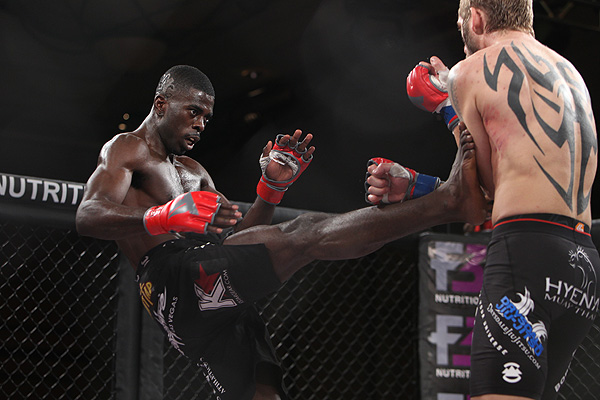 Bellator MMA is set for a weekend of back-to-back events, kicking off with Bellator 210 at the WinStar World Casino and Resort in Thackerville, Okla.

The main event of Bellator 210 takes place in the middleweight division, where Chidi Njokuani battles John Salter. Njokuani is coming off a victory over Hisaki Kato at Bellator 189, but that fight took place a year ago. Salter lost his last fight to Rafael Lovato Jr., who was able to secure a submission victory near the end of the final round.

The co-headliner heads to the welterweight division, where David Rickels takes on Guilherme Bomba. Rickels has been one of the more exciting veterans on the Bellator roster, but he needs to get back in the win column after a loss to Michael Page at Bellator 200. Bomba won by submission in his last fight at Bellator 192 against Ivan Castillo. Bomba is on the hunt to secure his fourth victory in the Bellator cage.

The main card will also feature a featherweight bout between Juan Archuleta and Jeremy Spoon. On the women’s side, flyweights Bruna Ellen and Kristina Williams face off. The preliminary card also features some familiar faces, including Daniel Weichel, Joe Schilling and Joe Warren.

The Bellator 210 prelims air live on Bellator.com beginning at 6:45 p.m. ET. The main card airs live on the Paramount Network at 9 p.m. ET.

Middleweight headliners Chidi Njokuani and John Salter are both 5-1 in their current Bellator tenures. Which fighter adds a sixth Bellator win, and how do they get it?

This is a coin-toss sort of fight. Both guys have very clear avenues of success, but they’re polar opposites. The outcome of this contest depends on one very specific factor: whether Njokuani can keep the fight on the feet. Njokuani has been dominant in the stand-up during his Bellator tenure. His lone loss came against Andrey Koreshkov in a fight where he was pressed and outgrappled. Koreshkov remains Njokuani’s lone tough test on the ground, but Salter is another formidable grappler.

Salter lost his last fight to Rafael Lovato Jr. in a fight where Salter couldn’t employ his grappling game. Lovato is the better grappler of the two, and he demonstrated as much on the way to choking out Salter late in the third round. Salter won’t have to worry about a similar fate against Njokuani. Salter kicked off his Bellator career with five straight victories before he ran into Lovato. In this run, he faced some good strikers, including fellow UFC veteran Dustin Jacoby. Njokuani may be on a different level, but he’s not out of the realm of what Salter has dealt with in the past.

This fight should be a back-and-forth battle with Njokuani winning in the early going before Salter employs his grappling and neutralizes Njokuani on the ground. It will take a round before Salter settles in and gets the fight to the ground. He’ll sap Njokuani of his energy with a top-heavy ground game. This fight will go the distance, however, and favors the grappler over the striker.

Multiple-division talent Juan Archuleta is now 20-1 over his career. Is he a legit top featherweight, and can he get past Jeremy Spoon in one of the evening’s featured bouts?

Archuleta has proven he is a top featherweight. He had a tough test against UFC veteran Robbie Peralta in just his second fight for Bellator. Early in round three, Archuleta was able to knock out Peralta, who has a vast amount of experience and represents the best competition Archuleta has faced to date.

It looks like Bellator agrees, too. The promotion has elevated Archuleta to the main card over some of the other top featherweights in the division. The organization wouldn’t put someone this high on the card over the likes of Daniel Weichel, Goiti Yamauchi and Joe Warren if it didn’t think he was one of the best in the weight class.

Not only is Archuleta a top featherweight, but he could conceivably vie for multiple titles within the next couple of years. After all, he held the bantamweight, featherweight and lightweight titles in the King of the Cage organization. It’s conceivable that he could make a similar run in Bellator.

Against Peralta, Archuleta led a back-and-forth battle at a breakneck pace. He sought to land some big knockout blows early, utilizing more than just his hands. When the opportunity presented itself, he brought the fight to the ground and changed up the pace to dominate the fight. Archuleta has proven to be a great, well-rounded fighter. He has more than just the knockout to rely on to achieve victory in this fight. He will continue his streak and convert this into the next big step in a title run.

It’s shocking that Daniel Weichel and Goiti Yamauchi have been relegated to the preliminary card. Yamauchi showed great potential early in his Bellator career when he rattled off submission victory after victory, but he’s been through a 10-month layoff following his loss to Michael Chandler in January. Weichel lost in July to Patricio “Pitbull” Freire by split decision in a title bout. These guys are incredible grapplers who are among the top of the lightweight division.