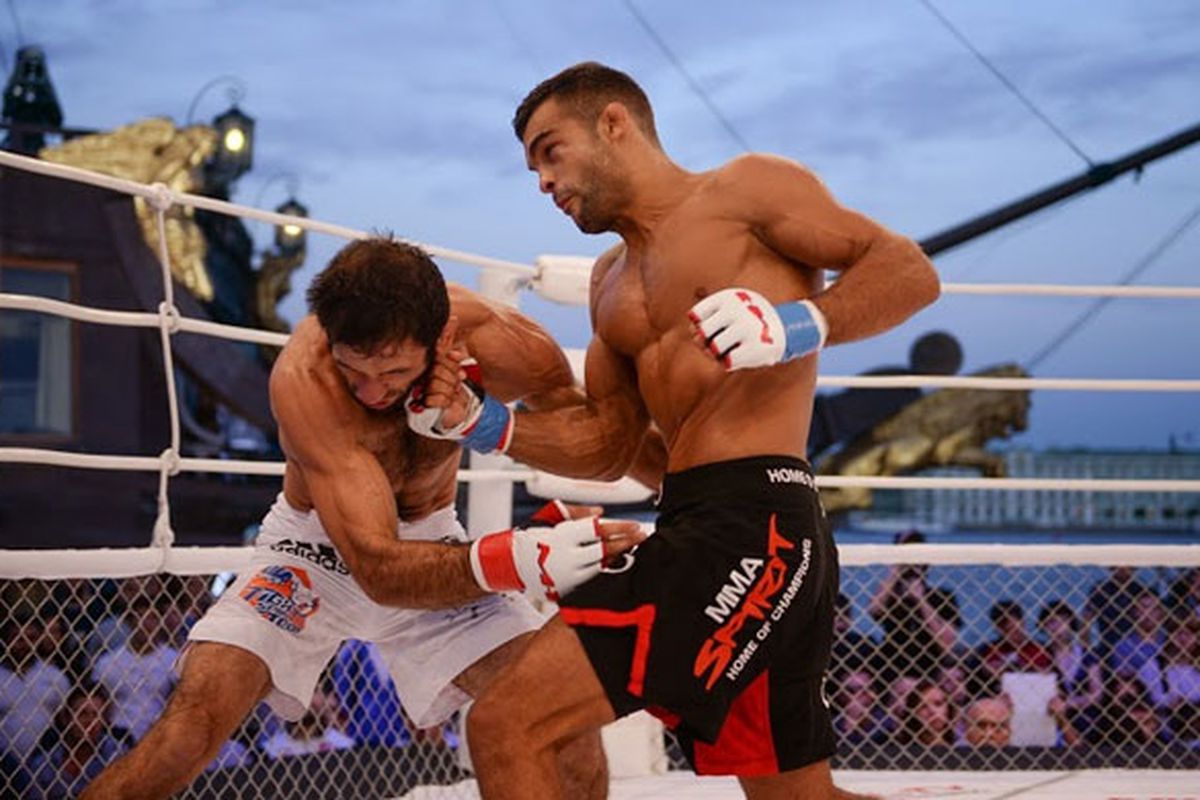 The 12th edition of Hex Fight Series certainly pushes the promotion to the forefront of the MMA scene in Australia. The card features a tripleheader of championship bouts, including a light heavyweight showdown between Jim Crute and Steven Warby and a lightweight tussle featuring Callan Potter and Jack Becker. However, it’s the fight for the inaugural middleweight title that draws the most interest. The fight gives Israel Adesanya another chance to display his skills in an MMA setting, opposite opponent Stu Dare.

Unless you’re a fan of kickboxing, it’s OK if you’ve never heard of the 28-year-old Adesanya. After all, his MMA bouts have primarily been less publicized contests in New Zealand and China. The Nigerian-born fighter has been in the ring with some of kickboxing’s best, including former GLORY champions Simon Marcus and Jason Wilnis. However, he finally earned some major recognition for his MMA skills with a first-round knockout of UFC veteran Melvin Guillard in a Australian FC middleweight title fight in July. While the rest of his MMA resume hardly compares in terms of star power, “The Style Bender” has also scored stoppage victories over established veterans Vladimir Katyhin, Dibir Zagirov and Andrew Flores Smith. All 10 of his pro MMA outings have ended in a knockout victory for the emerging prospect.

The 30-year-old Dare pales in comparison. The “Tumbleweed” has managed just eight wins through 12 pro outings since debuting in 2010. Dare, who trains out of Gym Stu Fu won his first two pro bouts by stoppage, but he alternated wins and losses through his next seven fights. Dare finally found a rhythm in 2015 and reeled off wins in his three most recent bouts. This stretch includes a technical knockout of veteran Ben Kelleher and a first-round submission of Ryan Biglar. Overall, Dare has four submissions and two knockout victories, but he’s suffered three knockout losses as well.

A fighter who has suffered 75 percent of his losses by knockout against a kickboxer who has won 100 percent of his fights by knockout? This isn’t much of a contest. Dare has to find a way to test Adesanya on the mat, but he’s likely to be in over his head in this bout. Adesanya has the technical kickboxing skills to dominate on the feet.

Adesanya has beaten far better competition via knockout through his first 10 fights. Tapology even has miscalculated the kickboxer’s record in one spot to already include 11 wins, perhaps unintentionally already anticipating his complete destruction of Dare. This fight should be a one-sided drubbing that showcases Adesanya’s potential in the MMA world.

While American fans are likely to be most familiar with American M-1 Challenge 86 participant Joseph Henle, the former The Ultimate Fighter contestant draws a minor affair against Mikhail Ragozin. The more enticing match-up here is the featherweight-title showdown between champion Ivan Buchinger and challenger Khamzat Dalgiev.

Buchinger has a lengthy resume that features some very familiar names. “Buki” debuted in 2008 and won his first 12 fights. His first loss came against future UFC fighter Akira Corassani. His next fight also ended in disappointment when he fell via strikes against Sengoku veteran Sergey Golyaev. Buchinger won nine of his next 10, with the only loss coming against future UFC fighter Anton Kuivanen. Then the Octagon Fighting Academy and MMA Spirit product stepped into the Cage Warriors cage opposite Conor McGregor in a lightweight-title showdown. Buchinger suffered a first-round loss to McGregor, but he rebounded to post a perfect record through his 10 subsequent outings. He has even avenged the loss to Golyaev along the way. Buchinger lost a December bout to Magomed Idrisov, but turned around to claim a victory over Timur Nagibin in June. The 31-year-old captured the M-1 featherweight strap with a fourth-round finish of Tural Ragimov. He has successfully defended the strap against Mansour Barnaoui. Buchinger has eight wins via strikes and 18 victories via submission. He has been stopped via knockout on three occasions, but he has never been submitted.

The 26-year-old Dalgiev is a combat-sambo specialist who will fight in front of a home crowd at M-1 Challenge 86. The Fight Club Berkut product debuted in 2014, but he suffered a 52-second submission loss to Ali Bagov. The young fighter has been perfect ever since. He won his next three fights as a lightweight before moving down to 145 pounds for three more victories. He jumped back to 155 for another two wins before returning to featherweight for his most recent outing. Dalgiev started against lower-level competition, but he made the step up to fight veterans Christian Holley and Dragan Pešić in his two most recent appearances. Dalgiev scored a submission against each man. Overall, he has five submissions and two knockout finishes.

Dalgiev will have to look to stay standing against Buchinger, who appears to have a weak chin. On the mat, the champ is an ace. If the fight hits the canvas, Buchinger should have the upper hand. However, Dalgiev is no slouch either.

Buchinger has gone from top prospect to veteran gatekeeper. He’s capable of beating all but the very best that he faces, and his experience against top-tier competition is deep. There’s something to be said for Dalgiev’s submission loss, though. It took an inexperienced foe just 52 seconds to wrap up Dalgiev. While even Dalgiev’s two most recent opponents featured plenty of finishing ability on the ground, they don’t compare to Buchinger. That’s a big potential weakness for the title challenger. Buchinger slams the gate shut on this prospect with a submission finish.

It’s another big week for prospects who made our recent “Give Them a Chance” list. In addition to Israel Adesanya’s appearance at Hex Fight Series 12, fellow nominee Go Kashiwazaki returns to action at ZST’s 58th event, which will celebrate the Japanese promotion’s 15th anniversary. Kashiwazaki clashes with fellow bantamweight Shunichi Shimizu.

Kashiwazaki is only 21 years old, but he already has 20 pro fights under his belt. The K-Place fighter was just 16 when he debuted in 2012 against Kazuki Date. Kashiwazaki locked in an armbar to finish Date and then claimed another five arms to move to 6-0 under the ZST banner. The Japanese fighter fought to a draw against Ken Kawamura before switching gears and knocking out his next two opponents. After another draw, he returned to his submission game and choked out five of his next six foes (the other fight went the distance). It was back to knockout finishes for his next two victories. Kashiwazaki finally endured his first loss in a November 2016 fight when he dropped a majority decision to UFC veteran Motonobu Tezuka. He didn’t return to action again until Grandslam 6 in late October against Tomohiko Hori. Kashiwazaki submitted Hori in the second round, and now he’ll fight again for the second time in less than a month. The youngster has 11 submissions and four knockout finishes. He has also claimed a ZST tournament championship and reigned as the promotion’s bantamweight champion.

Shimizu is a seasoned Japanese veteran. “Rolling Star” debuted in 2005, but he went a dismal 1-1-6 through his first eight fights. The Uruno Dojo fighter has since alternated between similar rough stretches and great success. After his slow start, he went 13-2 over his next 15 fights. He hit another rocky patch from there and went 3-3-3 over his next nine outings. He experienced another strong stretch beginning with his Sengoku debut and went 11-2-1 over his next 14 fights. After a three-fight skid that included a loss in his UFC debut against Kyung Ho Kang, Shimizu enjoyed another brief respite in which he went 2-0-1 with one no-contest. Then, the judoka hit the worst stretch of his MMA career when he dropped seven straight bouts. He’s recently climbed back into the win column with two victories on the MMA circuit.

Shimizu’s place on this card is fitting for a man known as the “Ironman of ZST.” However, his inconsistency has always been a major downfall that contradicts that nickname. Shimizu has spent stretches as a top bantamweight in the island nation, but he’s also suffered through periods where he can’t seem to win a fight. Perhaps it’s his name value that’s most important here as ZST tries to usher Kashiwazaki even further to the forefront.

Kashiwazaki is ridiculously young for such an experienced competitor. He’s also quite possibly the best fighter has encountered outside of the aforementioned Tezuka, who has defeated both of these men. The youngster has the ability to finish fights on the ground, where Shimizu has suffered a majority of his stoppage losses. The up-and-comer should tack another submission defeat onto Shimizu’s record this weekend.