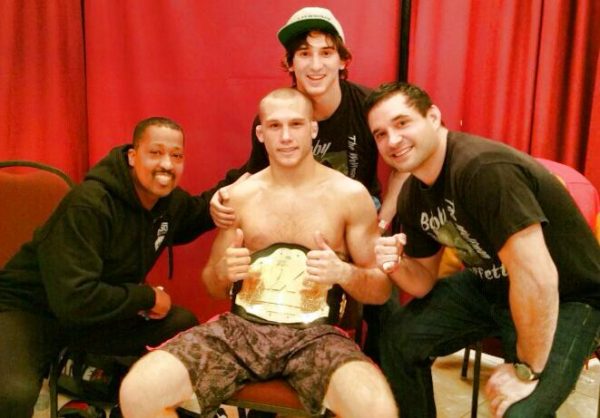 UFC Fight Night 139’s Bobby Moffett: ‘Still Kind of a Dream for Me’

What did you dress up as for Halloween? Was it the traditional scary guy, like a vampire or a zombie? How about something creative, like a box of popcorn or the Kool-Aid Man? Well, for Bobby Moffett, the decision is usually pretty simple.

“I pretty much dressed up as a wolfman three days in a row,” Moffett told Combat Press. “I don’t have any more ideas for that.”

“The Wolfman,” as he is known professionally, doesn’t really have to be that creative, especially when he’s in the middle of a fight camp. No matter how scary he looks on Halloween, Moffett puts on his best performances inside the cage.

After tearing through regional promotions on his way to a 12-3 record, the prospect had a chance to wow the UFC boss on Dana White’s Tuesday Night Contender Series in August. Only a minute into round two, Moffett was able to secure a d’arce choke on Jacob Kilburn. The victory earned him a contract with the big show.

“I felt good about winning, but I feel like I should have done a lot more damage,” admitted Moffett. “I think I kind of took it a little bit too easy, and I was just trying to win it on the ground. I was hunting for the submission finish, instead of just trying to hurt Jacob and forcing him to give me the finish. There were some things I could’ve done differently to finish the fight earlier. All in all, I was happy to get the win and get the contract.”

Shortly after the victory, Moffett found out that he was scheduled to make his UFC debut. His first Octagon outing takes place on Saturday night at the Pepsi Center in Denver, where Moffett will be on the preliminary card of UFC Fight Night 139. After 16 fights for Moffett, just getting the contract was surreal. However, the booking of a fight brought the reality of the situation front and center.

“It just cemented it being real for me,” Moffett said. “It was still kind of a dream for me. I knew I could make this happen, but it seemed like it was such a long shot. And I got a fight scheduled pretty quick. I knew two weeks after my contract got signed that I was going to have this fight. I’m looking forward to it.

“I’ve just been very excited to fight in the UFC. Just to be able to say that puts a really big smile on my face. I’m really looking forward to being able to make that walk and to go through the whole week. I’m just looking forward to the experience and to have the opportunity to show everybody what I’ve been working on. I feel really good about this fight.”

In his UFC debut, Moffett faces veteran Chas Skelly. The Texas-based fighter made his own Octagon debut over four years ago and has gone 6-3 since. However, Skelly’s last fight was in May 2017, so he has been on quite a long layoff. That fight ended in a TKO loss to Jason Knight at UFC 211, and Skelly took some time off afterward to recover from injuries.

“I think he’s super tough,” Moffett said. “Him and I have a similar style. We both like going to the ground and grinding our opponents and finishing from there. I just think I’m better than him at doing this. I think I have a more technical submission game than he does. He’s got a lot of experience, so I think he’s going to come in there and use that — put a lot of pressure on me in the beginning and try to get me flustered in my first UFC fight. I’m coming in with a game plan, and I’ve been preparing for that. I’m taking this fight very seriously, and I’m not judging him off his last performance.”

Moffett trains at the MMA Lab in Glendale, Ariz., with coaches John Crouch and Eddie Cha. One of his main training partners is UFC lightweight Drakkar Klose, but, for this camp, he has been spending a lot of time with NCAA Division I wrestler Mark Martin as well. Skelly was a college wrestler, so Moffett is preparing for a tough ground battle.

“I’ve integrated some more wrestling and hitting mitts in between,” Moffett explained. “I’m getting used to wrestling Chas and punching Chas, you know? Besides that, that’s something I’ve been needing to work on anyways. I’ve just been working hard like I usually do.

“I‘ve been working a lot of my camp with [Mark]. He’s been my wrestling partner a lot of days, and the days I hit mitts with Coach Eddie, I’ve been wrestling with Mark in between. I’m just getting really good looks from all my training partners, whoever I get in the cage with.”

Moffett has been training for this day for a very long time, but now his debut is finally here. He will have the chance to show the UFC brass once again that he belongs in the big show. Halloween may be past, but the Wolfman is ready to howl again.

“I’m coming in there just to be myself, you know?” said Moffett. “I want to fight this dude, win, make it look good and then be kind of weird afterward.”

Moffett would like to thank his coaches and training partners at the MMA Lab, including Mark Martin, Eddie Cha and Jarret Aki, as well as Scott Mitchell Chiropractic. Follow Bobby on Twitter: @Bobby_TheWlfmn
Advertisement