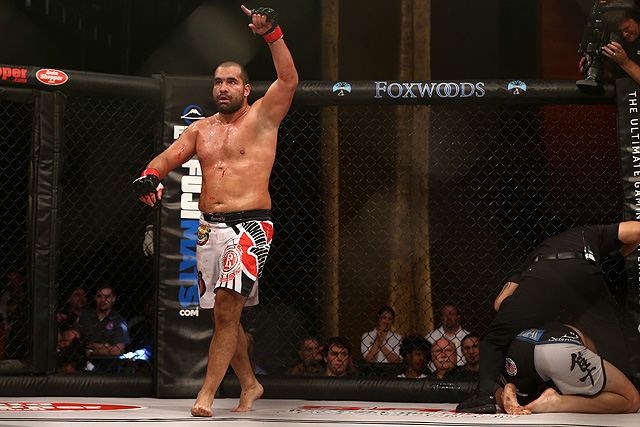 Not every fight happens in the cage. For some, especially at-risk children, the fight can be about getting an equal opportunity at a great education. When the Professional Fighters League heads to Washington, D.C., on Nov. 2 for a four-fight Fight Night event, these children will be the beneficiaries. While the fighters struggle for a win inside the cage, the Fight for Children educational charity will be the true victor, taking in funds from this event to support the cause.

The show will streams live on the PFL website, Facebook Live, YouTube, Periscope and on the Hangtime App. It can also be viewed right here on Combat Press via Fite TV beginning at 8 p.m. ET.

Is Caio Alencar on the verge of breaking into the top tier of heavyweights?

Well, he’s 38 years old and his biggest victory thus far is over fading wrestler Jared Rosholt. So, let’s go with no.

The Brazilian fighter has put together a solid 11-1 mark, but the 77-second knockout finish of Rosholt is hardly enough to qualify him as a member of the elite. He has stopped veterans like Edson França, José Rodrigo Guelke and Felipe Dantes, but he was also decisively finished by William Baldutti, a fighter who was 4-2 when he encountered “Caião.” The Nova União fighter has finished all but one of his victories, but he’s never fought someone on par with his current opponent, Blagoi Ivanov.

The 31-year-old Ivanov is the man who is more likely to emerge as a top-tier heavyweight. Time is still on his side, and the Bulgarian has an excellent skill set. He’s a black belt in judo and an international Master of Sport in sambo. The Bellator tournament participant and former World Series of Fighting heavyweight champion is a beast who has even defeated Fedor Emelianenko in World Sambo Championships competition. Ivanov, who started his MMA career in 2007, has a long list of solid victories that includes such victims as Kazuyuki Fujita, Ricco Rodriguez, Richard Hale, Lavar Johnson, Smealinho Rama, Derrick Mehmen, Josh Copeland and Shawn Jordan. His only loss came to Alexander Volkov, who has gone on to become a fringe contender in the UFC after also enjoying a Bellator title reign.

Ivanov’s resume includes six knockouts and six submissions. Alencar won’t be a pushover for the Bulgarian, but Ivanov should be able to outwork the Brazilian regardless of where the fight takes place. Given the tendency both men have for finishing fights, it’s unlikely they’ll go the distance. Ivanov has youth and skill on his side. He should finish Alencar within the first two rounds.

Lance Palmer is set to meet veteran Steven Siler in the evening’s co-headliner. Is the PFL taking a big risk with one its homegrown stars?

It’s always a risk to put a top promotional star in the cage against a savvy veteran in a non-title situation. It’s even more risky when that star is already 1-2 over his last three fights and the promotion isn’t yet building toward an actual championship season under its new format. Siler could kill any remaining buzz surrounding Palmer and force the former World Series of Fighting champion to start building his reputation again, nearly from scratch.

Palmer, a four-time NCAA Division I All-American wrestler while at Ohio State University, launched his MMA career with a blistering start in 2011. He won his first seven fights and captured the Resurrection Fighting Alliance’s featherweight crown. He stumbled in his WSOF debut against Georgi Karakhanyan, a veteran fighter who submitted Palmer in the third round of their championship affair. Palmer rebounded with three straight submission victories, including a finish of Rick Glenn to finally capture the WSOF crown and a successful defense against Chris Horodecki. In 2015, Palmer lost the belt to Alexandre de Almeida via unanimous decision. The following year, the pair met in a rematch that Palmer won on the scorecards. However, he turned around and lost the belt once again in his most recent outing against Andre Harrison.

Palmer’s previous two opponents are rising stars in the PFL promotion. Siler, while proving to be a scrappy veteran with the ability to win fights, is known more for his up-and-down UFC run that ended when he was released following three straight losses inside the Octagon. Palmer needs a win over Siler if he wants to hold on to his relevance within the promotion.

Luckily, Palmer’s wrestling and submission prowess make him a strong pick to top Siler. The UFC veteran and The Ultimate Fighter alum has had his own struggles recently. He gave the aforementioned Harrison a tough fight before falling via a split verdict. He scored a 13-second knockout in his next outing, but then he lost a unanimous decision against Hakeem Dawodu. Siler has suffered five knockout defeats and lost five fights by way of submission.

It’s that last detail that’s most concerning for Siler. Palmer has a very strong wrestling base, but he doesn’t just blanket opponents and ride out the clock. Instead, Palmer seeks out submissions. He’s most fond of the choke. If he can take Siler’s back, Palmer should get the finish.

The PFL is only hosting four fights at this show, and it’s meant to close out the PFL’s 2017 season. Has the former World Series of Fighting lost all of its momentum?

Let’s just say the organization is going to need a ferocious start in 2018 if it wants to regain the public’s attention. The WSOF had some brand recognition, but this rebranding effort is going to lead a lot of casual fans to not know a thing about the league. In a way, the PFL is falling into Titan FC territory. Both companies had a TV presence and some talented fighters, but they failed to really catch on with a more widespread audience. The difference here is that the new name means a new start for the PFL. The most important thing is for the PFL to aggressively promote its upcoming 2018 season in a way that the company hasn’t done with its small shows this year. It’ll be a matter of churning up new momentum, not riding on the faded momentum of what is essentially now a defunct league.

This card isn’t going to play well to anyone but the hardcore MMA fans. It’s not on television, but it can be seen on such platforms as Facebook, YouTube, Periscope and, of course, right here on Combat Press via Fite TV. Casual fans will probably miss this event, but that’s a shame. There’s plenty of reason for everyone to tune in. After all, Blagoi Ivanov and Lance Palmer have a chance to display their skills against formidable opponents and add another win to their respective records. Meanwhile, we’ll also be treated to a great sleeper match-up between bantamweights Timur Valiev and Josenaldo Silva. The only potential throwaway bout here features UFC vet Mike Kyle, who is only 3-7 since the start of 2013, against Daniel Gallemore, who holds an underwhelming 7-3 career mark. However, even Kyle and Gallemore could combine to deliver an entertaining fight, given their propensities for the finish.