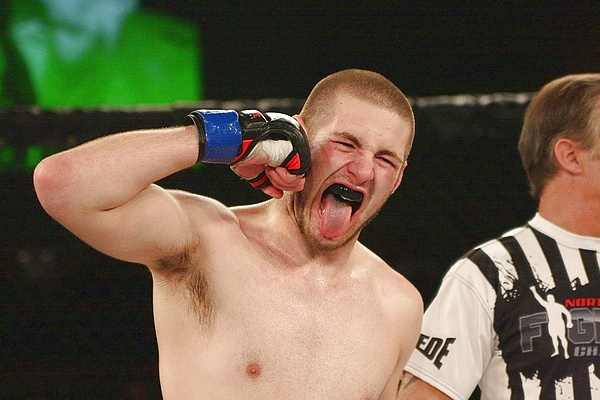 It’s not often when people get to meet someone famous, let alone train with them. On Nate Jennerman’s first day of training at the well-known Roufusport gym, he had the opportunity to spar with fighters like former UFC lightweight champion Anthony Pettis and current UFC fighters Erik Koch and Rick Glenn.

“I was definitely starstruck,” Jennerman told Combat Press. “I grew up watching these guys in WEC. I kept being starstruck until they started punching me in the face. I thought to myself that I better get going, or else I’m going to get knocked out.”

Jennerman’s journey to Roufusport was a unique one. He grew up playing “every sport,” he said, including running varsity track and playing varsity football in high school.

“But I never really started that much, and after high school was when I actually got better as an athlete,” said Jennerman. “When I was 16, I went to some local gyms and tried MMA, and I fell in love with it. After I had a few fights, I met Duke [Roufus], and he even complimented me after a loss. I can’t believe he even told me ‘good job’ and invited me to train at his gym.”

Fortunately for Jennerman, the decision to take Roufus up on his offer turned out to be fruitful. Although Jennerman lost his pro debut in 2013, he nearly finished his opponent and immediately made improvements to his game.

“I kind of gassed in my first fight, but I’ve improved my cardio since then,” Jennerman said. “Ever since then, I don’t struggle with it. Everything else has gotten better. I learn with every fight, and I had a breakthrough in training about two weeks ago. My sparring was incredibly better, and I also had a breakthrough in my jiu-jitsu. I’ve grown so much over the last year as a fighter.”

These breakthroughs have contributed to Jennerman’s 9-2 mark and a run that has included only one more loss since his debut fight. He racked up six submission victories and one knockout win. He notes that his knockout victory in his second pro fight should have been considered a submission.

Coincidentally enough, Bobby Moffett, his opponent at Legacy Fighting Alliance 20, has the exact same record as Jennerman, with the same number of knockout and submission wins. Jennerman and Moffett appear to be mirror images of each other. The two men face off on Friday, Aug. 25.

“He’s looking to get the finish,” Jennerman said of Moffett. “I respect him a lot, and I’m happy that he took this fight. He’s a black belt in jiu-jitsu, but my coaches and I have a really good game plan. I’m training four days a week for this fight. And I know he’ll try to take the fight to the ground, and I’m prepared for that. But if he wants to do the stand-up game, I’m ready for that too. Let’s do it!”

Although his record would suggest that Jennerman prefers submissions to knockouts, improving his striking game is currently where Jennerman’s main focus lies.

“I actually prefer to strike and get the knockout, because that’s when they actually quit,” Jennerman said. “But when I drop and hurt guys, I see their neck and I think to myself, ‘I’m taking that.’”

Jennerman made his LFA debut in his previous fight in May. He submitted Damien Hill in the first round, which capped off a positive all-around first experience with the promotion for Jennerman.

“LFA is great and awesome to work with,” he said. “They do the weigh-ins first and then go over the rules and then hold interviews after that. Everything was perfect, especially when I’ve been in other organizations that don’t do that. LFA puts on a great show with great production, and I was actually lucky to be the first fight on the last card. My fight was seen both on AXS TV and on LFA’s live Facebook feed, so my rating factor was through the roof.”

Jennerman wants to capitalize on his high ratings, while maintaining the ultimate goal of becoming a champion in the UFC.

“There’s no point in doing this if you’re not going to be the best,” Jennerman said. “I’m working my way up, and I’m going to the top and will be the best in the world.”

After his fight with Moffett at LFA 20, Jennerman plans to join countless others in watching the boxing match on Saturday, Aug. 26, between Floyd Mayweather Jr. and UFC lightweight champion Conor McGregor. Jennerman expects a fun fight, but he doesn’t give his fellow MMA fighter much of a chance.

“Floyd is just such a good boxer, and it’s going to be a boxing match,” Jennerman said. “Conor is the better fighter, but it’s not a fight. I think he’ll get outboxed, but I think it’s going to be entertaining.”

Jennerman would like to thank God, his wife and parents. He also wants to thank his teammates and coaches at Roufusport and his sponsors, including Combat Corner, Dowsky’s Raw Dawg Pet Foods and Advance Spine Care & Wellness in Sheboygan, Wis. Follow Jennerman on Twitter: @nastynatemma and Instagram: @nastynatemma
Advertisement