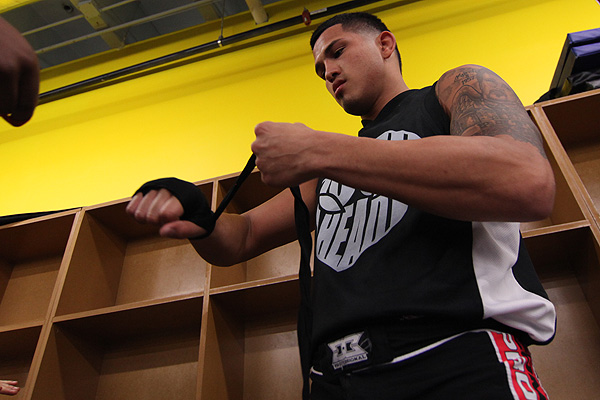 From Showtime to No Time: Can Anthony Pettis Revive His Career?

Every once in awhile, there’s a point in every sport where a certain athlete arguably does something amazing that gets the attention of fans worldwide.

Whether it’s basketball players making acrobatic shots, football players making one-handed catches, or baseball players consistently throwing pitches at 100-plus miles per hour, there is always some level of anticipation that starts brewing for a certain individual that gets people wide-eyed and jumping out of their chairs.

It happened in MMA six years ago, when WEC lightweight contender Anthony Pettis fought Benson Henderson, the defending champion at the time, for the WEC lightweight championship. In the fight, Pettis would defy gravity by pulling off a move that would be dubbed “The Showtime Kick,” which punctuated an amazing performance where he won the final WEC lightweight title before the promotion merged with the UFC.

After the merger with the UFC, many of the WEC’s fighters, including Pettis, were signed by the world’s biggest promotion. Pettis was viewed as one of the next up-and-coming contenders in the lightweight division. After going 1-1 in his first two fights, he went on an absolute tear. First, there was his head-kick knockout win over The Ultimate Fighter alum Joe Lauzon at UFC 144, followed by a fantastic TKO win over Donald Cerrone at UFC on Fox 6 in which Pettis crippled “The Cowboy” with a body kick and punches. Both of these wins earned Pettis “Knockout of the Night” honors, setting him up for a title fight against the aforementioned Henderson.

More than two and a half years after beating Henderson in that unforgettable five-round war in the WEC, the rivals locked horns again at UFC 164. It’s safe to say their second fight didn’t last that long, as Pettis submitted Henderson with a beautiful armbar in the very first round, once again defeating Henderson and capturing the lightweight title. For many people, this performance cemented Pettis as someone who could potentially go on to become one of the best fighters in the world for a very long time.

Unfortunately, the expectation was quite short-lived. Pettis did successfully defend his title against Gilbert Melendez, finishing the former Strikeforce champion via submission at UFC 181 and racking up his fourth consecutive performance bonus. However, just over three months later, Pettis lost his title in disappointing fashion at UFC 185, where he was completely dominated in a five-round fight against Brazilian Rafael dos Anjos. Every judge gave dos Anjos every round, and deservedly so. Dos Anjos had a flawless performance, sending Pettis back to the drawing board.

After losing his title to dos Anjos, Pettis lost fights against top contenders Eddie Alvarez and Edson Barboza, which prompted him to leave the division he had called home his entire career.

Pettis moved down a weight class to featherweight. His debut fight at 145 pounds seemed to make up for his past three losses. He pulled off an impressive third-round submission of Charles Oliveira at UFC on Fox 21. This set up a great interim title fight against fellow featherweight staple Max Holloway, who’s been knocking at the door of a championship for years now while riding a very impressive nine-fight winning streak that included six finishes. So, even with Pettis suffering through a recent three-fight slide, hopes were high since he was in a new division and really had something to prove.

Well, the opening bell had yet to ring and Pettis was already off to a bad start. He failed to make the 145-pound weight limit for the title fight. This meant he had to forego 20 percent of his purse, but, more importantly, he wouldn’t be able to capture the featherweight belt even if he won the fight, whereas Holloway could, since he made weight.

It was a really disappointing turn of events, especially after the original main event of the fight, which pitted Daniel Cormier against Anthony “Rumble” Johnson for the light heavyweight championship, fell through. The co-main event was expected to save the show, so it was very unfortunate that one of the fighters missed weight. Regardless, the fight still happened, but with the aforementioned stipulation. Even with Pettis missing weight, it remained a highly anticipated fight that provided the potential for big fireworks. Unfortunately, Pettis would go on to lose late in the third round via body kick and punches. This marked the first-ever knockout loss of any kind in his career.

Can “Showtime,” a fighter who had the potential of an amazing championship-reigning career, manage to find a way back to the top of the mountain everyone thought he was destined to reach?

There is hope. As a fighter training out of Milwaukee at the great Roufusport gym, which is run by former kickboxer Duke Roufus, who’s become an excellent MMA coach, Pettis has the opportunity to do great things again. There’s no doubt about it. He’s also a great inspiration for his younger brother, Sergio, who trains with him and has also become an excellent fighter.

To think, at one point the elder Pettis gained so much popularity that, in 2014, the cereal company Wheaties, featured him on the front of their boxes. He became the first MMA fighter to ever grace the front of a major cereal box. Now, it seems he’s reached a bit of a crossroads in his career, where he needs to either make some changes or continue to improve on top of the skills he already has. The days of cereal boxes could be no more if he doesn’t turn things around.

The possibility of Pettis becoming the successful champion many expected him to be is more than possible, but it’s currently hard to diagnose what his issue is and why he isn’t to be the fighter everyone knows he can be. He hasn’t even reached his fighting prime yet, so he still has time to work back up the ladder. However, nothing is guaranteed in this sport, which makes me anxious for what “Showtime” can accomplish from here on out.