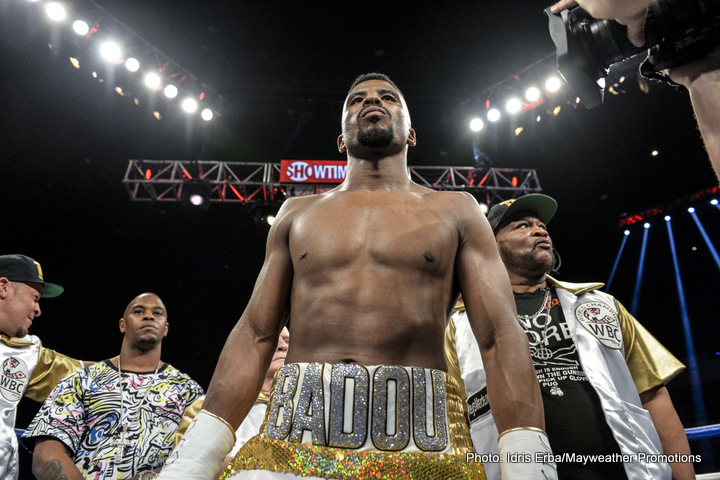 Badou Jack: McGregor and Mayweather Not the Only Ones to Watch on Saturday

It’s Monday, and another fight week in the boxing world begins. However, there’s a different vibe surrounding this one. Saturday’s headlining fight between Conor McGregor and Floyd Mayweather Jr. isn’t the typical big fight, and Saturday isn’t going to feature just the typical boxing fan.

McGregor is a young, brash MMA champion making his boxing debut, doing just enough to lure the boxing great Mayweather out of retirement. By now, the stories of both fighters have been told, and every living boxing and MMA fighter has been asked to comment. The hype around this fight, though, has overshadowed what is likely to be the most competitive match-up inside the squared circle that night. It doesn’t involve McGregor and Mayweather. Instead, it involves Badou Jack.

Jack will make his light heavyweight debut after a successful run as a super middleweight that led to a 21-1-2 mark with 12 knockouts.

“I haven’t had time too much to think about it, because the fight just got announced last week, but there hasn’t been no distractions or anything,” Jack told Combat Press.

At this point so close to a bout, Jack is usually months into the build-up for the fight. The press obligations are gearing down, the film sessions have been accounted for, and the visualization of defeating his opponent is becoming clearer and clearer. However, the card for Mayweather and McGregor was just finalized last week.

Jack will enter a different weight class, too.

“Yeah, I outgrew the [super middleweight] division,” explained Jack. “I can’t make that weight anymore, so that’s basically it. But now I feel like I’m more stronger. I feel like I’m more athletic. More ability. Everything feels better. I’m thinking a little bit like, man, I should’ve done this a long time ago.”

Jack’s mark on his previous division was more than made. Now, that chapter of his boxing career is complete with quite a few moments adding up to what has been a stellar career thus far.

“I always believed in myself,” said Jack. “If you don’t believe in yourself, then boxing is the wrong sport. I had smaller goals like, first, let me win a couple of fights, then come to America, get on TV — small steps at a time. I wasn’t like, oh, I’m gonna be a TV star tomorrow. It was one fight, one day a time. It’s been going pretty good so far.”

That mentality has helped Jack rise from his beginnings as a promising young prospect out of Sweden to become one of the sport’s best fighters. All the while, he’s stuck to those small goals. In 2009, his pro career began with five victories. His first win came on June 6, 2009 in Sweden against Maxim Nikonorov. The transition to America began with his sixth victory in the summer of 2011. Now, several years later, Jack has quieted the doubters on his march toward prominence. Entering his 2015 encounter with Andre Dirrell as a heavy underdog, Jack was seen as little more than fodder with just a puncher’s chance against the reigning World Boxing Council (WBC) champion. Jack walked out with the belt. Then, earlier this year in what turned out to be a “Fight of the Year” candidate, Jack was again seen as the underdog against British stalwart James DeGale. Jack survived an early knockdown in the first round after DeGale landed a straight left and then finished the fight strong with a 12th-round knockdown — the first of DeGale’s career — and emerged as the defending champ after a majority draw.

Throughout it all, Jack has remained the same man. He’s calm and collected. He isn’t fazed by the bright lights. In fact, he has taken his ascent to the level of a world-class boxer as well as any boxer could. You don’t have to look far in his camp to understand why. A member of Mayweather Promotions, Jack is under the tutelage of one of the greats.

“It’s been great, you know, to have the biggest star in the sport to have your back and give you advice and stuff,” said Jack. “I couldn’t ask for a better promoter. And he always tells me to stay patient, don’t worry about nothing, I’ll give you that fight, be smart with your money. He always gives advice. Not just boxing technique and stuff, but stuff outside the ring, too. He’s been through it all, so he’s definitely the guy to look to.”

With years of seasoning as a fighter and under the proper guidance of a promoter such as Mayweather, Jack is now finally a favorite entering a fight. He is looking to add more gold to his collection. The mentality, however, remains the same.

“I go in with the underdog mentality every fight,” Jack admitted. “If I’m the favorite or not, doesn’t matter. If this fight happened two years ago, he’d probably be the favorite. I think I heard, too, that I might be the favorite for the fight. People are starting to realize.”

The man staring across the ring at Jack will be World Boxing Association (WBA) champion Nathan Cleverly. Cleverly has a 30-3 record with 16 knockouts. Cleverly won the WBA belt by defeating Juergen Braehmer in October 2016.

“He’s a tough guy, a very tough guy,” said Jack. “He comes to fight, so he’s not gonna lay down just like that. His style, I think, fits perfect with my style. I like to fight; he likes to fight. I’m not gonna say he’s tailor-made for me, but I think his style will match up with my style. I want the knockdown, knockout.”

Though his focus is solely on Cleverly, Jack still has big plans for his new division.

“I can’t overlook Cleverly,” said Jack. “He’s still a two-time world champion, so obviously he’s doing something right. So my focus is on him. But, in the future, yeah, I want the big fights. I don’t want any small fights. I want the toughest guys. I want the best guys out there.”

When it comes to Saturday night, fans better beware. Not all of the fireworks will take place in the headliner.

“I’m gonna end it in spectacular fashion,” Jack proclaimed. “I always try to make my fights exciting. It doesn’t matter if its boxing fans [or] MMA fans, I’m gonna go put on a show.”