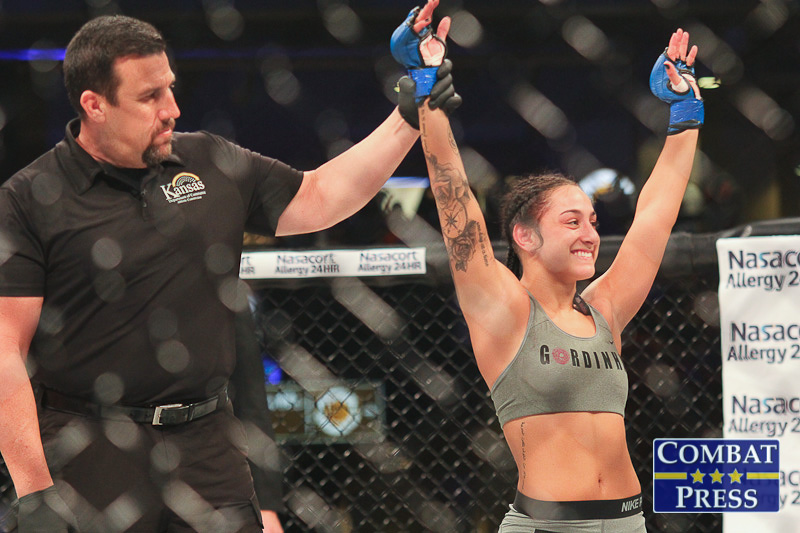 It’s very rare when a high school kid has any idea what she wants to do with the rest of her life. Sure, there are some kids that say they want to be a doctor or a police officer when they are in the single digits, and that’s what they end up doing. However, a lot of times, people just don’t know.

Five years ago, Emily “Gordinha” Ducote was only 18 years old. Tonight, she steps into the Bellator cage for her eighth professional fight on the main card of Bellator 181. Is this what she had in mind when she was in high school?

“No, it’s not,” Ducote told Combat Press. “I watched MMA and stuff like that, but I didn’t think I would be here. I’m so lucky I ended up in Oklahoma, and found this gym and these coaches. They’re just amazing. I didn’t imagine this was possible just a few years ago.”

Not only is Ducote 5-2 in her 23-month pro career, but she is also 4-2 as an amateur, and that goes back less than three and a half years.

Ducote trains out of American Top Team in Oklahoma City. She has a deep stable of coaches and training partners, and her record reeks of awesomeness for a young fighter. Her last four fights were in Bellator, and it should come as no surprise that the Brazilian Jiu-Jitsu purple belt submitted three of those opponents. However, her second-to-last fight was a bit of a hiccup.

At Bellator 167, still-undefeated Ilima Lei-Macfarlane gave Ducote a run for her money. Lei-Macfarlane took Ducote the distance to hand her a second pro loss. This was not the ideal outcome, but it did let Ducote know a few things about herself.

“I’m young, but I have learned a lot in my Bellator fights,” Ducote said. “I learned a lot in the fight with Ilima. I’ve been in bad positions, and I’m not afraid to be put there anymore. I’m just going to go out there and fight, and we’ll see what happens.”

Well, that next fight comes tonight at Bellator 181 in her current home state of Oklahoma. Originally, Ducote was set to face UFC veteran Valérie Létourneau.

“We loved it; we said yes, and we asked for the contract,” Ducote said. “It’s an opportunity and we’re excited. We’ve spent the last 10 weeks preparing, and we’re ready to go.”

Unfortunately, a very late injury knocked Létourneau out of the contest just a few days ago. Ducote will now face late replacement Jessica Middleton, who is 2-1 as a pro and was just handed her first loss in April at the hands of the aforementioned Lei-MacFarlane. This will be Middleton’s fourth fight in the Bellator cage, and Ducote certainly plans to add another ding to her record.

“I feel like I should be in the rankings,” Ducote said. “That’s all that really matters right now. I just want to be with the top girls right now. Ilima is up there, and that’s where I want to be right now.”

The loss to Lei-MacFarlane still does not sit well with Ducote, but she is OK with it for now. She knows if the stars align, she may get the chance to avenge the loss someday.

“It’s not really in my mind right now,” said Ducote. “Obviously, I think she should be fighting for the title this year. I don’t know against who. But, when she gets that belt, and I’m winning fights, if they want to match it up, that’s totally fine with me. Vengeance or an immediate rematch or something like that is not what’s on my mind.”

Tonight, live on Spike TV, Ducote will be back in the Bellator cage at the WinStar World Casino in Thackerville, Okla. Her goal is to move one step higher in the rankings. Middleton is a tough opponent, but the youngster, who five years ago had no idea what she wanted to do, will be ready for war.

“It will be the best ‘Gordinha’ you’ve seen,” said Ducote. “I’ve been working really hard, and I’m ready to go.”