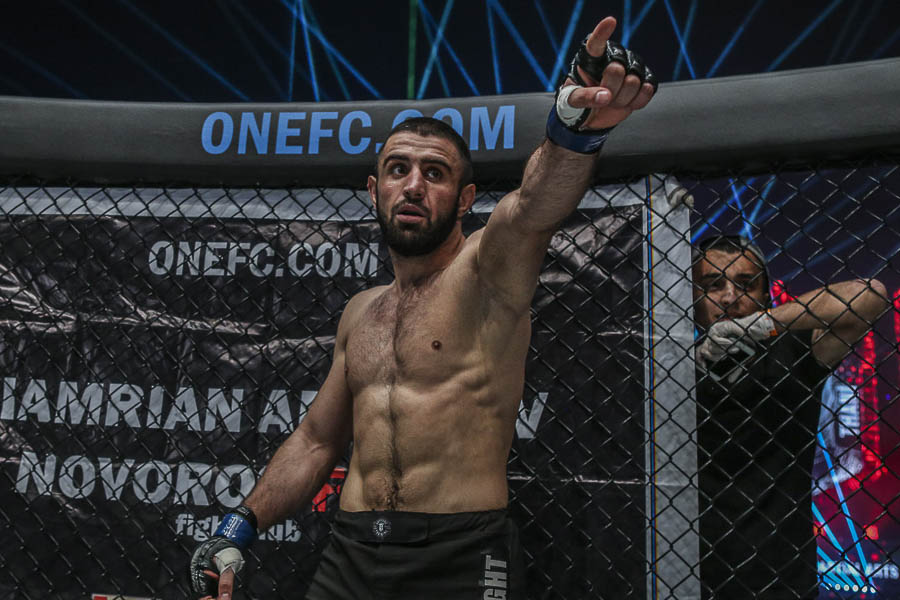 On Friday, Feb. 25, ONE Championship hosts ONE Championship: Full Circle with a championship double-header sitting atop the fight card. In the main event, Reinier de Ridder will take on Kiamrian Abbasov for the middleweight MMA title.

De Ridder won the belt from Aung La Nsang before also snatching the light heavyweight title from Nsang. The undefeated de Ridder will have a streaking opponent standing across from him in Abbasov. The Kyrgyzstani challenger has won five consecutive fights, including his last four with ONE. He picked up a fourth-round TKO over James Nakashima in his last bout, but has been out of action since 2020.

The co-main event will determine the light heavyweight kickboxing world championship as Roman Kryklia meets Murat Aygun. This bout was originally scheduled to take place in Dec. 2020 and was to serve as Aygun’s ONE debut. However, a host of issues have postponed the fight from injuries to COVID-19 safety protocols and beyond. Kryklia debuted with ONE back in 2019, securing the inaugural light heavyweight kickboxing title. He successfully defended that title in his most recent outing, securing a unanimous decision over Andrei Stoica.

Beyond the two title fights, another high profile bout at ONE Championship: Full Circle sees former middleweight champions square off against one another for a third time as the aforementioned Nsang takes on Vitaly Bigdash. Nsang bounced back from his two losses to de Ridder by defeating Leandro Ataides by first-round knockout at the end of 2020. Bigdash dropped a fight to Ataides after losing his rematch to Nsang but has won two consecutive fights since then.

Middleweight champion Reinier de Ridder puts his title and undefeated record on the line against a streaking Kiamrian Abbasov; does the belt change hands?

It will not. De Ridder is a two-division champion who could realistically hold and defend both belts for quite some time. He is only 31 years old, and he looked, almost equally, as impressive in his unanimous decision win over Nsang for the light heavyweight title, as he did when he picked up a first round submission over him for the middleweight crown. “The Dutch Knight” isn’t the prototypical Dutch fighter, relying more on his submission grappling background than the kickboxing that most fighters out of that nation are known to utilize.

De Ridder’s grappling background will come into play heavily in this matchup against Kiamrian Abbasov. Abbasov is a veteran of 27 fights, and is still more than a year away from turning 30 years old. He has shown that he can get the job done by any means necessary, notching 11 wins by knockout, four by submission, and eight by decision. However, in his four losses he has been susceptible to submissions. He has been forced to tap three times in his career, and though it has been several years since his last submission loss, look for de Ridder to implement a grappling-heavy gameplan.

De Ridder will take relatively little damage in this fight, and he will be the first fighter to submit Abbasov in seven years on his way to his first defense of the middleweight title. He will turn around quickly to defend his second belt, now that ONE is hosting more regular events and the world’s travel restrictions and COVID-19 protocols ease.

This fight has been scheduled, postponed, and rescheduled innumerable times. When they close the cage door behind these two men, it will be a high-paced affair from the very beginning. Kryklia has rattled off 10 consecutive wins and has been the ONE light heavyweight kickboxing champion since the title’s inception. He was out of action for all of 2021 and is chomping at the bit to get back to action. He will start fast and look to maintain a high pace without draining his gas tank too quickly against a durable fighter like Murat Aygun. The only blemish on Aygun’s resume is a doctor’s stoppage from a cut against James McSweeney back in 2019.

Ultimately, this fight will go the distance, but the champion will retain his title in a unanimous decision. It will be a close contest, but the pace of Kryklia will prove to be the determining factor and he will land the more damaging blows – especially, in the latter part of each round. The 30-year-old Ukrainian will make several more successful title defenses before his reign comes to a close.

Two former middleweight champions will face off against each other for the third time; will it be Aung La Nsang or Vitaly Bigdash who comes out on top in the trilogy?

Nsang has only lost to two fighters in the past nine years – de Ridder and Bigdash. The difference is that, in the rematch with de Ridder, Nsang was unable to even the score. However, he bested Bigdash when they fought for a second time. In nearly 70 percent of trilogy fights, it is the fighter who wins the second fight who comes out with a win in the third matchup. That will be the case again, and it will be Aung La who gets his hand raised.

Bigdash has fought just once since 2018, notching a submission win over Fan Rong last December. Ultimately, it will be the inactivity that causes him to falter, and he will struggle to get out of first gear against the much more active Nsang. This will be his second straight win since the two losses to de Ridder, and they might wind up meeting for a third time, despite the series being 2-0 in the Dutchman’s favor.

The women’s catchweight Muay Thai contest between Diandra Martin and Smilla Sundell. Sundell is Swedish, but she has been living in Thailand since she was 12 years old. The now-17-year-old has already notched almost 40 fights and is a name to watch in ONE Championship. She makes her debut against Diandra Martin, and Sundell will implement her gameplan from the jump, constantly moving forward and making Martin uncomfortable throughout the contest. Sundell is a name to keep an eye on as she begins her journey with ONE.