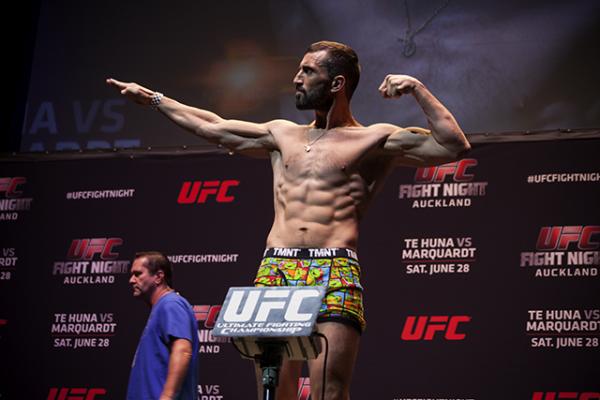 A fight will end in one of two ways for a fighter. It’s either a win or a loss. It’s that simple. As fighters pour their blood and sweat into training for a fight, they’re envisioning that win. Sometimes, and rightfully so, a fighter isn’t ready to cope with the feeling of losing.

Vik Grujic wasn’t ready for that feeling when he left Sydney on Nov. 7. He wasn’t even close to it. Walking out in front of an Australian crowd to fight for the UFC on home soil—he had been working towards that moment for years. When the day arrived, though, everything started to unravel. Grujic stepped into the Octagon with Chris Clements and fell via TKO in just over three minutes of the first round.

“After the fight, I’ve been pretty upset with a lot of mixed emotions, but I’m back at home now with the family, spending a bit of quality time, so I’m doin’ all right,” Grujic explained to Combat Press. “When I walked out to that crowd and seen all those people—I didn’t think the stadium was going to be as full as it was at that point because usually, with prelims, there’s still a lot of empty seats when you watch it on the TV—but man, it was amazing to walk out and to see all those seats filled up and to hear that crowd roar when I walked out. Man, that was something else. When I walked out, I was just overwhelmed. It was just a beautiful thing to see.”

It’s not just about the loss. That’s one aspect as to why Grujic feels the way that he does after coming up short in his last UFC appearance, but the biggest factor that makes losing a fight in his home country hard to deal with is the sacrifice that he endured to get there in the first place.

“When I go away to train for my fights, I’m overseas in San Diego at Alliance for five to six weeks at a time. I spend a lot of time training over there. I put a lot of time in there and a lot of preparation, you know. I’m not just going over there to put in the hours and get fit and get ready to fight. I work on the holes in my game,” Grujic confessed. “Every fight camp and every training session I do, I’m always improving [and] I’m always working. The guy that I was this time last year, I’m literally 10 times the fighter [now].

“That fight, I’ll tell ya, it was just one hiccup after another leading up to it. There was just so much going wrong. There was just so much sitting in the back of my mind and playing in my head. I’m pretty emotional about the whole loss at the moment. Things were just going wrong in the lead-up, with the weight cut and coming short a couple of hundred grams. That for me was humiliating. I’m extremely professional about everything that I do and my approach to the fight game, especially being in the UFC. I take it very, very seriously, and that was something that really upset me.

“I was out there and, man, you know, I’ve watched Chris closely in his previous fights and his fights with Matt Riddle and Steve Thompson. And, you know, he got out-classed. He got schooled, and I’ve watched the fight back a few times and it was looking exactly that it was gonna be the same thing all over for him. But he threw a good knee, and that knee shook the whole game up of the fight. I was dominant all the way through, [but] that one knee got me clear on the chin and I was staggering backward at that point. I don’t wanna come across and be the sore loser and say this, that or the other, but I received three straight punches to the back of the head immediately after that knee. And with an illegal blow, it can be contested whether [referee] Herb Dean saw it or whatever. But the fact of the matter is, I was quite shaken after those punches. And obviously I couldn’t regain and couldn’t recover, and then at that point the fight was over and nothing could be said or done about that.”

With two UFC losses to his name, Grujic now looks to regroup. For a man who has a great deal of pride in the way that he carries himself, losing in front of his friends, family and peers was a bitter pill to swallow. Moving on is not that easy.

“At the moment, I’m still training and still trying to stay in shape and sharp,” Grujic revealed. “There’s an air of doubt as to where I am at the moment. I’ve just come off a loss. By all means, I don’t see myself being cut by the UFC for that loss, but at the same time anything can happen. There’s always that question of ‘what if?’, and that’s sitting on my mind at the moment. After coming off a loss like that and to not know whether I’ve still got my job or not, it’s kinda emotional, especially at this time of the year. Pretty much all the money I get from my fights and my sponsorships goes into my fight camps. I virtually come back without much in my pocket because I reinvest everything into my development as a fighter. I’m just waiting to see what comes up next and what happens next. For myself, it’s just a guessing game that I’ve gotta play, and I’ve just gotta get over this loss at the moment. It’s really upset me that I shoulda won that. I had it everywhere. There wasn’t a time or a place in that fight that I was in any kind of trouble. I was sloppy, I was careless and I gave him enough space to throw a knee, and he won the fight because of that. I just can’t get my head around it at the moment.”

This past week, after the state elections in Victoria, Australia, the Labour Party gained power. It’s a shift that could open the door for Grujic’s home state to finally be able to showcase mixed martial arts in its entirety. That would mean that the UFC’s Octagon could touch down in Melbourne within the next 12 months (in fact, reports have the promotion headed there for UFC 193 in November 2015). That’s something of a dream come true for Grujic. Although the memories of his last fight are still fresh and painful, his next logical step is to keep moving onward and upward.

“Hats off to Chris. He got the win, and I’m at home at the moment and I’m extremely upset and pee’d off, so to speak,” said Grujic, with a laugh. “I spent so much time away from home to prepare for these fights, and I’ve been the better fighter every single time. And I definitely think that I’m worthy of fighting top 10 by next year. There’s no doubt about that in my mind. The caliber of the guys I train with over at Alliance are world-class and some of the best in the UFC. I stack up and compete with the best of them, and to go out like that, the way that fight happened, man, I’m just so disappointed with myself. The amount of time that I invest preparing for these fights, to come up short—I’m just so disappointed in myself and just infuriated.”