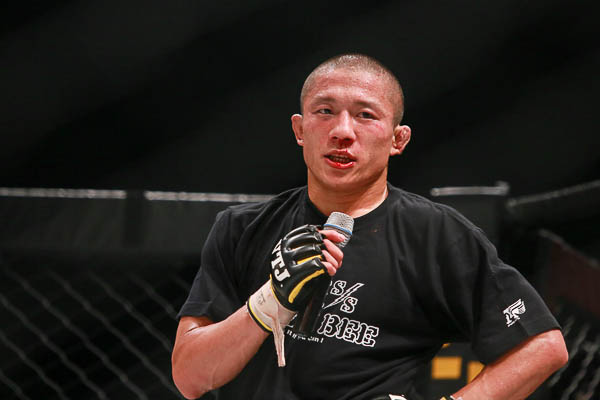 The Forgotten Flyweights: Rizin Fighting Federation Could Be Their Saving Grace

Hollywood. It strives each day to create new and exciting ways to entertain the masses, all while reaping the monetary benefits. It creates the plot of good versus evil in every which way and form, and yet it continues to be able to capture the audience in new ways. The consensus is that nine times out of 10, a happy ending is in store — all will be right and the hero will once again triumph over whatever lay ahead. Sometimes, if the right events unfold, Hollywood and the real world find common ground.

In the current MMA scene, the focus should be on UFC flyweight champion Demetrious “Mighty Mouse” Johnson, whose fifth-round video-game-esque victory over Ray Borg earlier this month gave him his 11th title defense. It’s a feat that had never been accomplished before and likely won’t ever happen again. This, in addition to his fifth-round, last-second submission against Kyoji Horiguchi, are records that are going to be extremely difficult to ever beat. One can question the validity of some of his opponents and if they really deserved their shot, but the man fights whoever is put in front of him.

It’s not the first time this has happened in MMA, though. Look at the widely regarded previous greatest fighter of all time, Fedor Emelianenko. If one was to dive deep into the Russian’s record, the discrepancies and validity of his monumental reign could be scrutinized and torn apart piece by piece. But is it? No. Not even with his recent string of losses since his return from retirement. Fedor was great in a time where the sport needed someone with his mystique and allure. It wasn’t until that fateful day back in June 2010 that Fabricio Werdum needed just 90 seconds to take away the very mystique that had alluded so many before him. It took just one loss for many to question a record at the time of 31-1 with one no-contest. Just one.

Mighty Mouse has competed inside the Octagon a grand total of 17 times. He has been victorious in 15 of those 17 bouts, with his lone blemishes coming via decision loss to Dominick Cruz and the strange draw against Ian “Uncle Creepy” McCall. Since moving to flyweight, Mighty Mouse has come out on top in 13 of 14 bouts. He has routed each opponent and has improved his game in nearly every aspect to do the one thing that fans want. And no, it’s not just maintaining his championship title. It’s entertaining the fans. In all honesty, Mighty Mouse’s biggest challenge as of late has been getting the recognition he feels he deserves.

The UFC has not promoted Johnson enough. The general interest in the flyweight division has flickered like a candle being blown out on some kid’s birthday cake. The division was doomed to fail when the UFC introduced women’s MMA just a year later and gave the fans Ronda Rousey. Rousey had her rise and meteoric downfall. Then eyes all fell on Conor McGregor. Why?

Mighty Mouse does the unthinkable. He’s broken the title defense record. He had to do it as the co-headliner behind an interim title fight featuring lightweights Tony Ferguson and Kevin Lee. Ferguson captured the interim belt. Instead of the masses getting excited about witnessing history in the co-headliner, they were wondering when they’d get a fight between Ferguson and McGregor. It’s a downright disgrace to the flyweight champion and the entire division.

It seems that flyweights have never — and likely will never — get the respect that’s given to the heavier divisions. The average fan wants to see brutal knockouts, such as former UFC middleweight Alex Nicholson’s nasty elbow from this past weekend’s Island Fights 42, in the heavyweight division. Fans do not want to see a technical brawl that showcases the true definition of mixed martial arts. The concept itself has been lost, which is unfortunate given the barbaric and one-dimensional fighters that once graced the Octagon. No longer is it just striker against grappler or kickboxer against karateka. Yes, there are many fighters with a specialty, but they are much more well rounded than in the days of old. That’s why Mighty Mouse needs a change, and a big one at that.

Hold the phone. That seems absolutely insane, right? However, take a moment and really look at what is happening to the division. As a champion, Johnson has been featured in some of the lowest-performing UFC pay-per-views in recent history. While it’s no fault of his own, there must be someone to blame. He just broke the record for title defenses against the last competitive opponent currently fighting in the division.

There could be a young up-and-comer waiting for his chance against Mighty Mouse, but who knows if the flyweight division will even exist by the end of 2018. The UFC tried to bully him into a fight with T.J. Dillashaw, who has never competed at 125 pounds, before Johnson insisted on defending his belt against Borg. UFC President Dana White even seemed to entertain the idea of scrapping the division altogether if Mighty Mouse didn’t agree to the Dillashaw fight.

Mighty Mouse signed a brand new eight-fight contract with the UFC in 2016. Since then, he has fought four times. That leaves four fights for the legendary flyweight, but Rizin needs to step in and buy out his contract. In Japan, his personality and fighting style would be welcomed by both fans and fighters. He does what he must in order to ensure his victory. The Rizin tournaments could give Mighty Mouse more competition and hopefully more exposure to those other than the diehard fans. Bellator currently doesn’t host a flyweight division, or that could have been an option as well.

Regardless of where Mighty Mouse goes, something needs to change. Rizin already scooped up previous Mighty Mouse opponents Horiguchi and, as of this week, McCall. The company needs to continue to strategically gather up the top flyweights in the world and give them a home where they are appreciated.