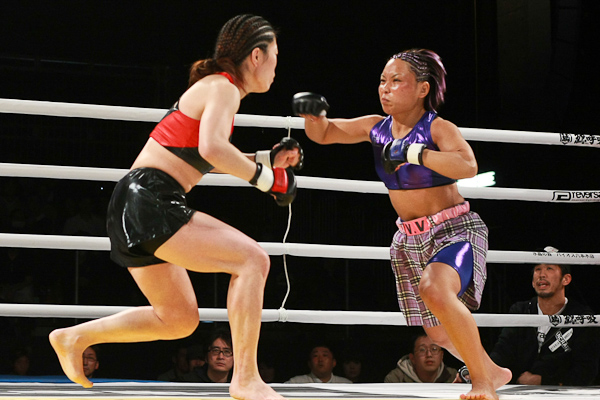 Out of Obscurity: ONE Championship, FNG 69 and LFA 15

ONE’s unique weigh-in rules can be confusing. Jenny Huang and Mei Yamaguchi, for example, are atomweights, but they only need to tip the scales as strawweights in order to make weight. Weird, right? The pair meet this weekend at ONE’s latest venture, dubbed “Light of a Nation.”

Yamaguchi, the final Valkyrie featherweight champion, was once considered a top atomweight. However, the last six years have not been kind to her. After building up an 8-2-1 mark, Yamaguchi has gone 7-8 through her last 15 outings. She started training in karate at a young age, but Brazilian Jiu-Jitsu is her strong suit. She has six wins by way of submission, but she added her first career knockout victory with a 44-second finish of Miyoko Kusaka at Deep Jewels 7 and added a technical knockout of Satomi Takano in a one-night tournament at Deep Jewels 8. “V.V” has a long list of significant names on her resume, with wins over Saori Ishioka, Emi Fujino, Kyoko Takabayashi, Yuka Tsuji, Mika Nagano and Mina Kurobe and losses to Fujino, Tsuji, Seo Hee Ham, Katja Kankaanpää, Megumi Fujii, Patricia Vidonic, Ayaka Hamasaki and reigning ONE champ Angela Lee. All of the 34-year-old’s losses came on the scorecards. While she’s had quite a few setbacks in recent years, her victories over Takano and Kurobe put her back in the mix amongst the world’s best in her weight class.

The 26-year-old Huang has a much shorter resume that lacks quite the same level of star power. The Tianjin Top Team export debuted in 2015 with a decision nod over the previously undefeated Daisy Singh. Huang then moved to ONE, where she rattled off four straight wins, including three choke submissions. Her most accomplished rivals during this stretch were Jeet Toshi and April Osenio. With an unblemished mark through five pro outings, Huang earned a title shot against aforementioned ONE champ Angela Lee. Lee was able to utilize strikes to submit Huang and hand the young prospect her first career loss.

Yamaguchi has been wildly inconsistent when it comes to winning fights. She also has a bad habit of keeping fights close — seven split decisions, two majority verdicts and a draw — but she has at least proven to be an extremely difficult out. Her recent knockout victories added another dimension to her game after a career filled with submissions, but she has stumbled in back-to-back defeats against Lee and Isleta Nunes.

Huang has given Taiwan a reason to care about MMA, but she’s not yet a proven world-class competitor. Yamaguchi has added a striking arsenal that might give Huang problems, and the Japanese veteran is a strong grappler who should easily counter anything Huang offers up.

If this fight goes to the judges, it won’t be a shocker to see a split panel. It’s perhaps the one area where Yamaguchi is most consistent. However, Huang’s inexperience might allow her more seasoned foe to run away with this one. It should be a unanimous nod for Yamaguchi.

Fight Nights Global doesn’t have a deep lineup for its 69th offering, but it does deliver a solid headlining bout. One fight removed from the UFC, former UFC flyweight title challenger Ali Bagautinov takes top billing against Pedro Nobre, whose own Octagon tenure wasn’t quite as celebrated.

Bagautinov, who has a strong wrestling and combat sambo base, streaked out to the tune of three wins inside the UFC, including decisions over Tim Elliott and a then-flyweight John Lineker. It was enough to put Bagautinov in a 2014 title showdown with Demetrious “Mighty Mouse” Johnson, but Bagautinov, just like so many others before and after him, suffered defeat against the top pound-for-pound fighter. The Russian tested positive for performance-enhancing drugs in the aftermath of his loss to Mighty Mouse. After serving a one-year suspension, Bagautinov returned and lost a decision to top flyweight Joseph Benavidez. He claimed a decision nod over Geane Herrera, but then suffered a decision loss to yet another top flyweight, Kyoji Horiguchi. With the black mark of a suspension and just one win in his last four fights, the 31-year-old was shown the door by the UFC. In his first post-UFC fight, which came at FNG 64, the combat sambo practitioner was put away in the third round by Tyson Nam.

Nobre’s UFC stint was far less inspiring. The Brazilian made one Octagon appearance, against Iuri Alcantara, and the bout ended after just over two minutes of action. Alcantara landed a series of strikes to the back of Nobre’s head and Nobre was unable to continue. The fight was deemed a no-contest and the UFC parted ways with Nobre. The 31-year-old was perfect through his first three post-UFC bouts, including two affairs under the Titan Fighting Championship banner. The wins put him in line as a top flyweight contender, but he failed in two title bids. First, he lost to the aforementioned Elliott. Then, following a win over Sid Bice that put Nobre back at the front of the line, the Brazilian lasted just 86 seconds against Jose “Shorty” Torres.

Nobre is dangerous, both with his fists, which have accounted for 10 knockouts, and on the ground, where he has recorded four submission victories. The Brazilian Top Team fighter has a nice, shiny record, but he’s struggled against notable names. His losses came to World Series of Fighting standout Sheymon Moraes, The Ultimate Fighter winner Elliott and rising prospect Torres.

Bagautinov definitely lands in the notable-names category for Nobre. While the Brazilian has a strong mix of striking and grappling, he’s going to struggle with the strength and wrestling prowess of Bagautinov. Nobre does have the height and reach advantages, but he’s not likely to find a way to utilize them successfully against a fighter who closes distance and seeks takedowns. The 32-year-old Russian has claimed a fairly even amount of victories via submission and knockout. Nobre has been stopped by strikes twice, and it’s very likely that Bagautinov’s ground-and-pound barrage will leave Nobre bloodied and beaten once more.

What’s the best way to test an unproven, undefeated prospect? The Legacy Fighting Alliance’s answer to this question involves throwing the prospect in the cage with a seasoned veteran to see who survives. To spice things up even more, the promotion opted to dangle the vacant heavyweight title in front of these two big men at LFA 15. The prospect in this case is Jared Vanderaa. The grizzled vet is Richard Odoms. The pair meet in the evening’s headliner.

At age 42, Odoms is in the twilight of his career, but he’s still winning fights. “The Black Eagle” has been competing professionally since 2010. He has claimed victories over notable opponents Darrill Schoonover, Jake Heun, D.J. Linderman and Yusuke Kawaguchi. His losses came to the likes of Jared Rosholt, Konstantin Erokhin and Evgeny Erokhin. Odoms is based out of San Antonio and enters the fight with five knockout finishes, including a second-round dismantling of Willian Hoffmann in his most recent appearance at LFA 6, and one submission victory. The Legacy veteran has a background in karate. Odoms cuts to the heavyweight limit from a walking-around weight of approximately 300 pounds.

The 25-year-old Vanderaa is a far smaller heavyweight who has sometimes fought in bouts contested at a 230-pound weight limit. The Team Quest fighter turned pro in mid-2015 and submitted fellow rookie John Rizzo in just 29 seconds. He saw more cage time in his sophomore outing, where he finished Daylin Murray with strikes in just over four minutes of the first round. His 2016 campaign resulted in three more stoppages. First, he put away Joe Hernandez via strikes. Then, he knocked out veteran sub-.500 fighter Mychal Clark. Most recently, he submitted the formerly undefeated Sean Johnson. “The Mountain” stands 6-foot-4 and enjoys an 83-inch reach.

Odoms can get sloppy and often leaves himself open to counters. While he went the distance several times in the early stages of his career, Odoms is fighting with a kill-or-be-killed approach these days. Over his last six fights, he’s seen the scorecards just once while also recording three wins and two losses by some form of knockout.

Vanderaa’s pro career numbers look stellar: five wins in five attempts, three knockouts, two submissions, no losses. However, let’s back up and look at his amateur run: six wins in nine attempts, four knockouts, no submissions, three losses. These numbers are a little more pedestrian. After winning his first four ammy outings, Vanderaa suffered defeats against Prentice Williams and Jamal Pogues. He won two of his final three amateur contests, but did suffer another loss to Pogues. He also went the distance in two of his wins and needed more than a round before notching three of his four stoppage victories.

Odoms is a senior league competitor in a much younger man’s world, but he’s no slouch. The 42-year-old’s last five victories came against a set of opponents who sported a combined 47-20 mark when they clashed with Odoms. By comparison, Vanderaa’s five pro wins came against rivals with a combined 19-14 record.

Vanderaa carries all the hype, and it would be no surprise if he emerged with the victory. However, there could be an upset brewing if Odoms can land one big punch.