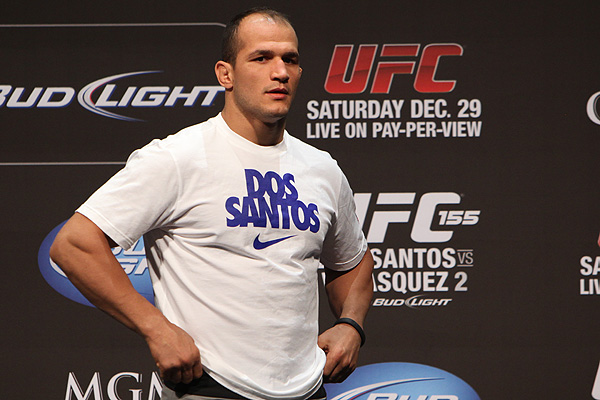 Where Does Junior dos Santos Go From Here?

Junior dos Santos came into UFC 211 just under a week ago as the heavy-handed heavyweight who could put a halt to the amazing run Stipe Miocic has enjoyed. He not only left UFC 211 without the heavyweight title, but also without a clear direction in the division.

The Brazilian’s run since being crowned champion in 2011 has featured numerous peaks and valleys. After defending his title against late-replacement opponent Frank Mir at UFC 146, dos Santos has alternated wins and losses. He had two dreadful showings against rival Cain Velasquez. There was also a nasty technical knockout finish at the hands of Alistair Overeem.

However, the 33-year-old dos Santos has been able to offset the bad showings with his knockout of Mark Hunt at UFC 160 and through his part in putting on an all-time classic against Miocic in their first encounter at UFC on Fox 13 in 2014. It appeared that dos Santos had finally turned a corner against Ben Rothwell at UFC Fight Night 86 in 2016. The Brazilian looked the best he had since his run to the title.

However, those hopes were shattered in the fight with Miocic at UFC 211. We saw dos Santos utilize some leg kicks early, which was a refreshing change from his usual boxing-heavy style. However, this was the entirety of the “JDS 2.0” we’d see in the Octagon. The same holes were present in the Brazilian’s game that we’d seen in his previous losses. Gone was the foot movement featured against Rothwell or the durability he showed in the Velasquez drubbings. Instead, we saw dos Santos back himself against the fence and attempt to exit out by dropping his hands and attempting to move out of his opponent’s way.

We’ve seen this before from dos Santos in his fights with Velasquez. The imposing Velasquez backed JDS against the fence and proceeded to unleash a devastating onslaught that was sure to leave lasting damage to dos Santos well beyond his MMA career. Fans and analysts thought that by moving to American Top Team, the former champ could fix the holes in his game. It looked like we saw the results of ATT’s coaching in the Brazilian’s win against Rothwell. However, the dos Santos who fought Rothwell didn’t show up to UFC 211 and lost in devastating fashion to Miocic.

The defeat leaves dos Santos in a bit of a predicament. He just definitively lost to the current champion and has struggled to find any consistency in his post-title run. He’s still young for the heavyweight division and without a doubt is one of the most popular fighters on the UFC’s roster. His name value and fan-friendly style will likely keep him in the title picture, but it’s fair to wonder if we’ve seen the zenith of his run in MMA.

Miocic is making a case as the greatest heavyweight of all time, and he has potential opponents in Francis Ngannou, Derrick Lewis and a possible rematch with Fabricio Werdum down the line. There’s also Velasquez lurking in the wings if he can remain healthy enough. Dos Santos is nowhere to be found in this conversation.

The heavyweight division is quirky, in that it allows fighters to continue to remain relevant despite being well past their prime. Fighters in lighter weight classes don’t get to enjoy this luxury. It likely means JDS stays near the top of the rankings. He’s still a dangerous fighter and has the potential to be a world champion. However, that potential will matter little if dos Santos can’t put the pieces of the puzzle together and avoid making the same mistakes he’s made in the past. Luckily for him, he has a great team at ATT to help him. However, it’s clearly something that’s going to need to be heavily addressed in the gym before his next outing.