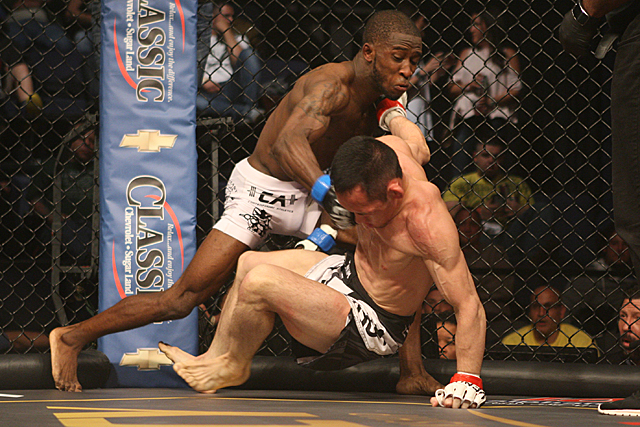 In a week that’s rather light on major up-and-comers, the Polish-based KSW organization had the most established prospect on tap, with lightweight fighter Marif Piraev set to take on Kamil “Szymek” Szymuszowski at the promotion’s 38th show. However, Piraev fainted on Monday while cutting weight and had to be hospitalized. With Piraev out, Szymek now meets Gracjan Szadziński, a far less renowned fighter.

Szymuszowski is a strong veteran fighter with a solid record. The 27-year-old Szymek has been competing professionally since 2010. He won his first five fights, including four by submission, before hitting a rough patch in which he won just two out of his next six fights. He was stopped once via strikes in this stretch, but lost the other three contests by decision. The Gracie Barra Łódź export has bounced back in a stellar way, winning his last eight fights. While this run has included a couple of stoppages, it primarily consists of fights won on the scorecards, including two split verdicts. Szymek started his career as a light heavyweight and has gradually stepped down to middleweight, welterweight and now lightweight. His last three fights marked a significant step up in competition that included a unanimous nod over WEC and UFC veteran Maciej Jewtuszko.

Szadziński is jumping into deep waters on less than a week’s notice, which is an especially tall task for such an inexperienced fighter. He made his pro debut in 2013 and won his first three fights, including two via knockout. He suffered his lone setback in a fight against a 2-2 opponent and then lost a kickboxing bout before returning to the win column in his last two MMA outings. Szadziński, a member of the Berserker’s Team Stargard camp, has a background in kickboxing.

Outside of the late change in opponents, size is probably the biggest factor in this fight. Szymek started off at 205 pounds and has worked his way down to the lightweight division. At 6-foot-2, he’s incredibly tall for a 155-pound fighter. Szadziński, meanwhile, has been competing as a lightweight for much of his pro career and stands just 5-foot-9. Szymek is going to tower over his opponent and enjoy a big reach advantage.

Szymek knows how to fight long. He might not have the refined striking attack of his opponent, but he should make up for it by staying out of range in exchanges. Unfortunately, he does have a habit of lunging forward and dropping his hands as he moves back. He can leave opening for his opponents to counter, and this could be where Szadziński has the best chance to score the upset. If Szadziński opts to throw kicks, though, Szymek will seize the opportunity to catch the leg and use a sweep to dump his opponent to the mat, where he likely holds the biggest advantage. Szadziński needs to keep the fight standing and find a way to get inside against his taller opponent.

Beyond the possibility of a stunning knockout off a counter, Szadziński doesn’t have much to offer against such an experienced rival. Szymek was preparing for the much more polished and well-rounded Piraev. As long as he doesn’t take his new opponent lightly, the veteran should emerge with a submission or a ground-and-pound TKO stoppage for the victory.

Legacy Fighting Alliance’s busy schedule might not be such a good thing. After strong lineups in its first few events, the promotion has been lacking title match-ups and true prospects at the top of many of its recent, almost weekly efforts. That’s not to say that LFA 8 flyweight headliners Jesse Bazzi and Cee Jay Hamilton aren’t worth watching, but they hardly bring the same name power as earlier headliners like Leandro Higo, Trevin Giles, Ryan Spann, Kevin Aguilar, Damon Jackson, Adam Townsend, Marcus Edwards and co-headliner Andrea Lee. Still, in a division where the UFC is dying for new blood, Hamilton and Bazzi have a chance to make a big impression.

Bazzi, 25, didn’t have the easiest of amateur careers. He lost several fights during those early days, but he’s been more consistent since turning pro in 2015. The Michigan-based up-and-comer reeled off four wins, including two submissions, to get things started. He suffered his lone loss when he tangled with Bellator veteran Malcolm Gordon in mid-2016 as part of a very active campaign where he fought once every two months between April and October. The Michigan Top Team member responded to the defeat by picking up back-to-back wins, including a recent unanimous nod over fellow young prospect Jared Scoggins, brother of UFC flyweight Justin Scoggins.

The 30-year-old Hamilton is the veteran scrapper in this pairing. “The Autobot” had an equally rough amateur career that included a loss to the aforementioned Justin Scoggins. His pro run has also been somewhat better, though he has suffered four defeats. The Contemporary Martial Arts product turned pro in 2013 and won his first three fights while competing for the Georgia-based Wild Bill’s Fight Night series. He then hit a rocky stretch in which he won just two of his next six fights. One of his losses came via split decision against Jarred Brooks, who still remains undefeated in the present day after 12 pro outings. Hamilton has won his last five outings, avenging his first pro loss along the way with a victory over Jacob Hebeisen under the Legacy FC banner, but he only managed split verdicts in two of those contests, including the win over Hebeisen.

Bazzi is a tenacious striker who also sports a strong grappling game. His forward movement and aggressive ground-and-pound attack makes him a threat to finish fights with strikes both on the feet or on the mat. The one drawback to his approach is his habit of keeping his hands low in stand-up exchanges. If his opponent keys in on this flaw in his game, Bazzi could be left looking up at the lights or fending off submissions. When Bazzi is put on the defensive on the ground, he can falter, as evidenced by submission losses he has suffered both as an amateur and a pro.

Hamilton is just as relentless in pressuring his opponent. He, too, will move forward with striking flurries, but he employs more kicks in his game than Bazzi generally utilizes. He also has the same propensity to leave his hands very low. Hamilton’s other edge comes in wrestling. Bazzi tends to use his strikes to cause chaos and force his opponent to the mat, but Hamilton can shoot for a double-leg takedown and land it with ease. If he can ground Bazzi, then he can work for the submission finish that the youngster has been prone to in the past.

While this fight doesn’t give us a stud prospect, it does guarantee excitement. The proof is in the highlight reels of these two men. The video editors didn’t have to hunt too hard to find plenty of devastating exchanges on the feet, perfectly timed takedowns and ground-and-pound beatings to snip together. This one promises to deliver pure entertainment as Hamilton uses his more well-rounded game and the benefit of experience to capture the victory over Bazzi.

Only one of this week’s featured fighters has a spotless record at stake. At the 33rd edition of Cage Titans, undefeated featherweight competitor Manny Bermudez shifts his focus to the bantamweight division for a match-up against Tony Gravely.

Bermudez went 7-1 as an amateur, suffering a submission loss to Grant Mosley in only his second fight. His amateur career launched in 2012, and Bermudez has only been fighting professionally since 2015. As a pro, he has finished six of his eight opponents within the first round. He went the distance to defeat formerly undefeated fighter Dan Dubuque and recently went to the scorecards in a notable split decision nod over Bellator and World Series of Fighting veteran Saul Almeida. The South Shore Sportfighting export also holds a first-round submission win over Jeff Anderson, the same Anderson that went three rounds with Almeida. Bermudez, who submitted his opponent in all seven of his amateur wins, is a certified finisher. Bermudez makes quick work of opponents, too. His six first-round finishes as a pro are joined by four first-round finishes as an ammy.

The 25-year-old Gravely hasn’t enjoyed quite the same spectacular run. The Virginia-based fighter did go 6-1 as an amateur between late 2014 and late 2015 before turning pro in October 2015. The Tech MMA and Fitness Academy export won his debut bout, but he lost his sophomore outing. He compiled a six-fight winning streak before suffering another loss, but that loss signalled the beginning of his current 1-2 stretch through his last three fights. Gravely has two finishes via strikes and two submission victories, but he has also been submitted on two occasions.

Take a bantamweight fighter with holes in his submission defense and match him up against a former featherweight with a long resume of first-round finishes, and what do you have? A recipe for an early submission to end this fight.

Bermudez is a skilled grappler with a history of putting fighters away in a hurry. Gravely is a tough opponent against whom Bermudez can prove his worth, and that’s exactly what the undefeated prospect will do. This fight should end in the first round when Bermudez coaxes a tapout from his foe.