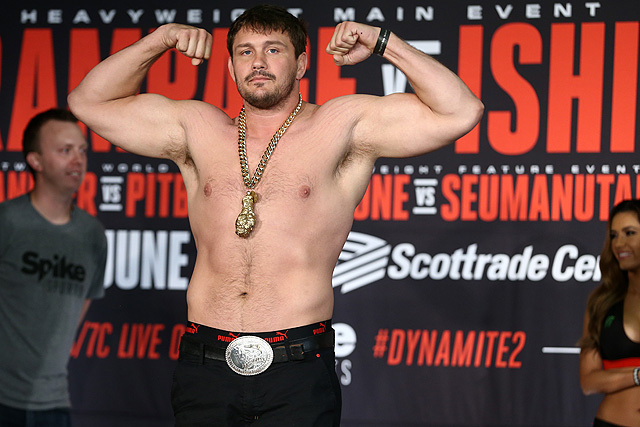 On Saturday, Feb. 18, Bellator MMA will host its 172nd event from the SAP Center in San Jose, Calif.

In the night’s main event, MMA legend Fedor Emelianenko makes his promotional debut against UFC veteran Matt Mitrione. The 40-year-old Russian Emelianenko enters the contest riding a five-fight winning streak that dates back to 2011. “The Last Emperor” returned from a three-year retirement in late 2015, stopping Jaideep Singh under the Rizin FF banner. He then took on UFC veteran Fabio Maldonado at EFN 50 in June, earning a controversial majority decision win. Mitrione, meanwhile, has picked up two straight wins inside the Bellator cage following his departure from the UFC. He stopped Carl Seumanutafa in his promotional debut, before topping another UFC veteran in Oli Thompson at Bellator 158 in July.

The action kicks off Saturday with a live preliminary card stream above at 7 p.m. ET. The night’s main card airs on Spike TV beginning at 9 p.m. ET.

The fighters hit the scales at 8 p.m. ET on Friday, Feb. 17. A live video stream (courtesy of Bellator MMA) appears above, while the results appear below.

* – the bout between Murphy and Ramirez was initially canceled after Ramirez could not reach the maximum five-pound weight discrepancy allowed by the California State Athletic Commission. Murphy opted to gain weight and the fight will take place.

# – France was fined 20 percent of his fight purse for missing the middleweight limit of 186 pounds.