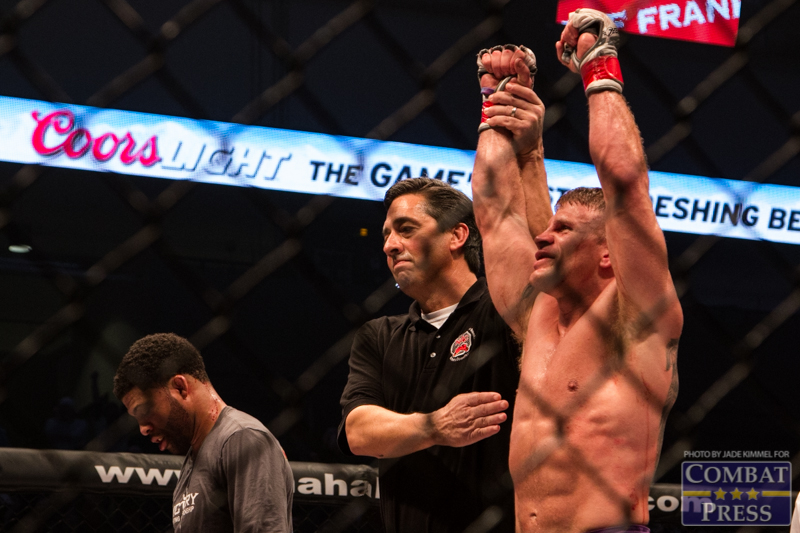 Ryan Roberts has had a great deal of ups and downs in his life. Just in the last decade, the late thirty-something fighter has been through bouts with addiction, the loss of his sister, and the near-loss of his mother, which led to amputations. On the other hand, he has beautiful children and a successful career as a mixed martial artist. He was able to purchase and rejuvenate a stagnant business, and he was able to land his dream job as a general manager at Racks and Ringnecks, a wildlife ranch in Yutan, Neb., that provides outdoor experiences to its clients.

In 2016, his next big step was the purchase of a car wash in Yutan, which is outside of the Omaha metropolitan area, where he resides. He landed this opportunity through a combination of chance and persistence.

“It’s a little self-service with two inside bays and one outside bay,” Roberts told Combat Press. “It’s in Yutan, where I work, where Racks and Ringnecks is at. I wanted a place I could wash the mud off my wheel wells, so I don’t go home and it drips all down my driveway. There was no place between my house and where I work. This was it.

“So, I started doing some research and found out the guy didn’t want to sell it to anybody. I just wanted to get a hold of him, and figured that maybe I’d get a hold of him on the right day. So, after Thanksgiving of last year, I got a hold of his number and gave him a call. I met him that weekend and kind of made him laugh. He said, ‘What do you know about a car wash?’ I said, ‘Not a damn thing.’ He started laughing, and we talked for about 45 minutes, and he told me to meet him on Saturday. So, I just did my due diligence. I spent about a month and a half researching what it would take to get this place back to running. Next thing I know, I had a number in my head and we started negotiating.”

In February, Roberts finally closed on what he later named Stella’s Car Wash, after his daughter. He hadn’t fought since September 2015. He had vacated his Victory Fighting Championship featherweight title to take an opportunity with the Resurrection Fighting Alliance, where he faced Adam Townsend. The lead-up to that fight did not exactly go as expected. Townsend missed weight by a lot, coming in as a light welterweight on the scale, and beat Roberts by a unanimous decision in a fight that probably shouldn’t have taken place at all.

“I don’t think they were honest with me,” Roberts said. “I don’t think this kid was ever close to weight, and I think they told the promotion that. I feel the promotion kind of misled me a bit. I found out the kid never went to the hospital. They told me he couldn’t make weight because he had to go to the hospital and it was the flu. But, he fought like he was a 170-pounder, and he came in at 163 or 164, and I came in at 145, so that was a little frustrating. It is what it is. I chose to take the fight, and I thought I could win it. Lesson learned. I won’t be taking the fight next time when they come in 18 pounds overweight.”

It was only a couple months after the fight that he started looking at the car wash. With little time to spend on training, Roberts took a break. He was still drawing interest from local promotions, but he just didn’t have the time to focus on a full camp.

“[VFC CEO Ryan] Stoddard was actually trying to get me to fight earlier in the year,” Roberts said. “But once I got this car wash, my first opening day wasn’t until April, so it took me a few months to get this thing up and running. I wanted to play with that. Then I wanted to get back in the gym. So, I spent a few months in the gym to see if it was something that I really wanted to go back after. I’m 38 years old, and I’m not getting any younger. I tested it and it worked out all right, so I decided to try it again. I’ve definitely been away from the game a bit, and I was able to find that hunger again. I’m kind of hungry right now. I’m excited.”

This fall, VFC announced a big three-show run over 30 days, which started on Nov. 23. The promotion had not had an event since July, but Friday night’s VFC 54 will mark the second of those three events. For the co-headliner, Roberts will face VFC bantamweight champ Rob Emerson in a featherweight bout. Emerson stepped up as a replacement for Grant Dawson.

“Rob is stud, man,” Roberts said. “I have a lot of respect for him. He’s a hell of a fighter. He comes out ready to go, he’s not going to dance around, and he’s going to come in here throwing some heat. I couldn’t ask for a better opponent.

“I was surprised I was even told Dawson in the first place. I don’t really know much about him and had looked at him a couple times in the past. I get asked to fight somebody and I go fight him. I never really have been in a position where I get to pick my opponents, and I just want the next toughest guy I can get. I’m glad that Rob moved up a weight class and is ready to go.”

Roberts, like a lot of Midwestern fighters, is very well rounded, but he really likes to get in the cage and just bang. There aren’t a lot of fighters from the bread basket that are going to fight like Dominick Cruz, constantly keeping their distance. Toe-to-toe is the style the Midwest brings to the table, and Roberts loves this match-up.

“I think it’s great, man,” Roberts said. “Rob, he’s a little bit taller, and he goes. I’ve watched a couple of his fights, and he’s just straight ahead. He throws heavy leather, and he’s great on the ground. He’s all-around, and I see a lot of myself in there. It’s like fighting myself, only a little skinnier and a little taller.”

On Friday night, VFC 54 kicks off live on UFC Fight Pass from the Baxter Arena in Omaha with a stacked card of veterans, rookies and everything in between. Roberts is ready to show the world that he still has the gritty will to win that fans have come to know and love.

Roberts has a lot on his plate these days, but whether he’s up or whether he’s down, he always seems to come out on the better end of the deal. He loves what he does for work, he loves owning a business, and he still loves fighting. Even in his late 30s, and with 33 fights already under his belt, the hunger is still there. So, what’s next?

Roberts would like to thank God, his coaches and training partners at Premier Combat Center, his family, friends, fans and sponsors. Follow Ryan on Twitter: @AreYouReadyMMA
Advertisement