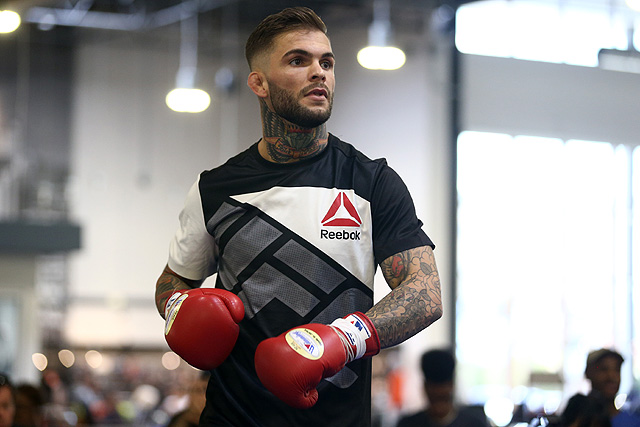 Cody Garbrandt Deserves a Title Shot If Victorious at UFC 202

After a clean and powerful first-round knockout of Thomas Almeida at UFC Fight Night 88, Cody “No Love” Garbrandt takes his undefeated 4-0 UFC record into UFC 202, where he will face Takeya Mizugaki. With a win, Garbrandt would be, without a doubt, the only choice to face bantamweight champion Dominick Cruz for the title.

Garbrandt, who is a part of Team Alpha Male and trains with Urijah Faber, has also inherited the beef between Cruz and the Alpha Male camp. While Cruz defeated Faber to retain his belt at UFC 199, Garbrandt is on the rise. Garbrandt’s last performance against Almeida was proof that it’s “No Love” time.

Almeida was undefeated heading into the fight against Garbrandt, but the quick finish for the Alpha Male product derailed the Brazilian. The victory was a clear indication that Garbrandt is ready to make a jump to the top of the bantamweight division. While representing Team Alpha Male, Garbrandt has taken time to not only focus on the rise of his career, but to put on a show.

The young man in the crew has stepped up and in a figurative way put Team Alpha Male on his back while he rises. In addition to crushing Almeida, the 25-year-old Garbrandt has vanquished Marcus Brimage and Augusto Mendes via strikes, with a unanimous decision win over Enrique Briones sandwiched in between those knockout finishes. In total, Garbrandt has disposed of eight opponents by way of knockout or TKO during the course of his nine-fight pro career.

Yes, Team Alpha Male does have another rising star in Paige VanZant, but Garbrandt hasn’t been shy in representing his team inside the Octagon. While talking to Inside MMA, Garbrandt predicted he would knock out Mizugaki and then his eyes would turn to a fight with either the aforementioned Cruz or another Alpha Male nemesis, T.J. Dillashaw.

You could call Garbrandt the Team Alpha Male “Warrior.” He’s ready to battle anyone in his way and anyone who has got on the bad side of Faber and company. From the long-standing rivalry with Cruz to the issues with former Alpha Male member Dillashaw, Garbrandt has set himself up perfectly for a title shot while going after rivals as well.

A win at UFC 202 would line up Garbrandt to make a jump into the top five in the rankings. If he delivers another performance like he did against Almeida, then it would be hard not to give him a title shot against Cruz. The performances are there. The trash talk and buildup are there, too. Now all that is needed is another win for Garbrandt.

Even if the shot doesn’t come right away, Garbrandt has put targets on the backs of both Cruz and Dillashaw. He doesn’t seem like he will back down until he has defeated both of them. While Conor McGregor and Nate Diaz will headline the show at UFC 202, the rise of Cody Garbrandt and the tension building at the top of the bantamweight division is certainly must-see TV.