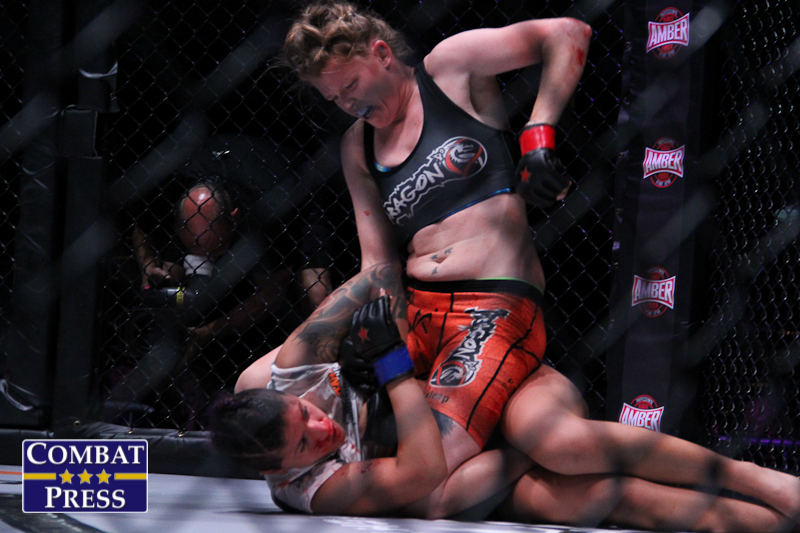 On Saturday, May 7, Invicta Fighting Championships returned to The Hangar at the OC Fair & Event Center in Costa Mesa, Calif., for its 17th event. The card streamed live on UFC Fight Pass beginning at 9 p.m. ET.

In the night’s main event, bantamweight champion Tonya Evinger squared off against California’s own Colleen Schneider. The veteran Evinger entered her first title defense riding an eight-fight winning streak, including six finishes. Schneider stepped into her title challenge having won four straight of her own. Her decision win over Raquel Pa’aluhi at Invicta FC 15 helped her secure her place as the No. 1 contender for Evinger’s belt.

The co-main event saw undefeated strawweight champion Livia Renata Souza put her belt on the line against UFC veteran Angela Hill. The Brazilian Souza made the first defense of her belt in January, when she stopped the previously undefeated DeAnna Bennett by first-round TKO. Hill was appearing on her third straight Invicta FC card, having knocked out veteran Alida Gray and former title challenger Stephanie Eggink in her two previous outings.

Tonya Evinger has had an illustrious run as bantamweight champion, and it continued at Invicta 17. A hard-fought, five-round affair had Evinger win on the scorecards, though a tough Colleen Schneider wouldn’t go away. In what was an entertaining five rounds, Evinger scored a unanimous decision, proving her wrestling and striking to the better of the two.

Invicta’s strawweight division has a new champion after Saturday night, and her name is Angela Hill. In what was a barn burner of a five-round affair, Hill outlasted Souza using superior cardio and striking to take the 115-pound belt. Souza had Hill in some precarious positions, but ultimately, Hill was able to fight out of those spots and garner a victory.

In the blink of an eye, Charmaine Tweet destroyed Latoya Walker with a massive spinning back fist. She started off slow, but toward the end of the first round, Tweet uncorked a massive strike that put Walker down on the mat. It was a huge win that will put Tweet into the title contention, that is especially crazy now that Cris “Cyborg” Justino’s status as champion may be in limbo. The future is interesting for Tweet.

Medeiros Dominated Serio to a Finish

It may have been a late-notice bout, but Kaline Medeiros made Saturday night a big one. The powerhouse dominated the fight, whether it was on the feet or on the mat. Medeiros used big slams and powerful ground and pound to soften up Serio, who looked completely outclassed. In the end, Medeiros finished the fight with an impressive TKO, showing that she’s a legitimate threat in the strawweight division.

Anderson Beats the Buzzer to Knock Bell Out

In what many assumed would be the Fight of the Night, Megan Anderson and Amanda Bell did not disappoint. In one round of action, the two featherweight warriors threw down in a crowd-pleasing affair. That said, Anderson was able to put Bell away in under one round. A body kick and a right straight was the killer, putting Bell down and out. The win for Anderson was huge, putting her in contention in the 145-pound title.

It wasn’t easy and it wasn’t pretty, but Christine Stanley took a unanimous verdict over Shannon Sinn. It was a bout that was largely contested on the feet, but Stanley ultimately took the win. A healthy dose of leg and body kicks, as well as aggression and toughness, scored her the win. It was a fight that had early Fight of the Night written all over it.

In what was a crowd pleaser, Rachael Ostovich and Ariel Beck  banged out a fun split decision in front of a raucous crowd. Hands were thrown and positions were exchanged on the ground, which made it great. Beck was clearly the better striker, landing more on a granite-chinned Ostovich. Ostovich was the better grappler, besting Beck on the ground with some great wrestling an even better submissions. The judges were called and Ostovich took the split call, but the fans were the real winner.

The Invicta 17 card opened with a bantamweight bout that did not go without controversy. Laura Howarth took a split decision over Alexa Conners in what many would call a questionable call. After three rounds of mostly striking, the judges were called to make a decision. Despite the fact that Conners was the aggressor and likely landed more strikes, Howarth was crowned the victor, much to the dismay of the crowd.