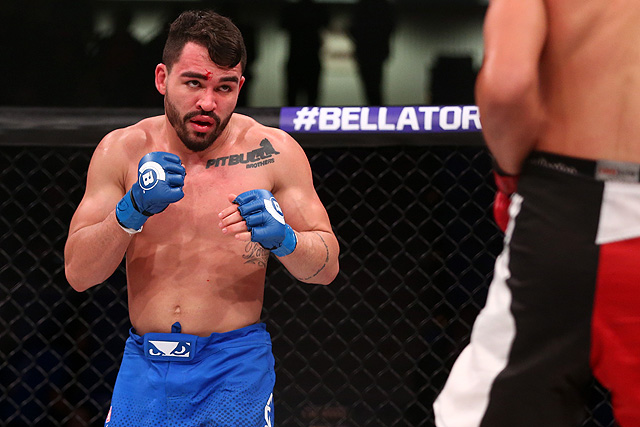 Bellator is leaving the North American continent to bring its show to an entirely new group of people as it heads to Italy for Bellator 152. The card, which also features kickboxing bouts, will take place in the northern Italian city of Turin at the Pala Alpitour with a five-fight main card.

The main event for the historic Bellator card will feature a familiar face to the Bellator ranks. Patricky “Pitbull” Freire takes on promotional newcomer Kevin Souza. Souza heads over to Bellator after a 3-1 stint in the UFC and takes the place of the injured Derek Campos. Freire will look to take this fight and continue his upward trend to steal the lightweight belt from champion Will Brooks.

The co-headliner features another familiar face. Italian Alessio Sakara takes on Bellator mainstay Brian Rogers. Rogers and Sakara should combine for an exciting fight. Both fighters should look to keep it on the feet and land the knockout blow, especially Sakara as he looks to entertain in front of his fellow countrymen.

The lineup also includes a battle of prospects. Featherweights A.J. McKee and Danilo Belluardo go head-to-head and make a run from prospect to title challenger.

Also at featherweight, Italians Daniele Miceli and Daniele Scatizzi will battle it out and stake a claim in Bellator. And the women’s flyweight division will also see some action when Anastasia Yankova makes her much-awaited debut against Anjela Pink.

Patricky “Pitbull” Freire has undergone his second change in opponents, this time only a few days from the fight. Originally, Freire was expected to face Brent Primus, but the bout later fell apart. Then Freire was expected to meet Derek Campos, but Campos had to pull out due to injury. Now, Freire draws Kevin Souza.

Souza formerly fought for the UFC, where he went 3-1 and notched two “Performance of the Night” bonuses. Souza’s release from the UFC after just one loss is a little weird, but the UFC’s loss is Bellator’s gain. Souza should be a capable opponent for Freire. The 31-year-old was on a run in the UFC with three wins before he ran into Chas Skelly. The highlight of that run was a knockout victory over Katsunori Kikuno in early 2015.

Souza’s path to victory is that knockout punch — he can flash some serious leather. Fourteen of Souza’s 16 victories came by way of knockout, and Freire has been known to have defensive lapses in his striking. Freire can be a very aggressive fighter, which leads to losses on the feet. If Freire doesn’t pick his shots carefully or opts to charge in a little too recklessly, Souza can definitely hit that shot and end the fight.

Freire might actually have a tough battle here against Souza. He could try to win on the feet, but it seems awfully dangerous. That leaves the ground game. Freire needs to look for the takedown or a trip to get the fight to the mat.

Freire has bounced around lately between wins and loses. This is where Freire finally breaks through, though, and starts his first winning streak since 2014. Freire by decision.

Alessio Sakara is perhaps the most notable MMA fighter to hail from Italy. Now, he is back in primetime in the co-main event against Brian Rogers.

Sakara is an exciting fighter when his opponent comes to trade shots with him. The Italian owns 11 of his victories by knockout and will most certainly look to add to that tally here. Rogers, who has nine knockout victories of his own, should be another game opponent for Sakara. Just these stats alone should tell everyone that this fight most likely won’t hit the ground unless somebody gets dropped and, even then, the fight will be finished with strikes, not grappling.

Both fighters have also hit rough times recently. Sakara finished his tenure in the UFC with a four-fight losing streak. Since then, he has won once in two fights with the other ending in a no-contest. Rogers, meanwhile, has gone 2-3 in his last five fights and hasn’t been on a winning streak since 2011.

This is really a pick’em fight, and the pick here is Sakara to get the knockout victory..

A.J. McKee, Jr., has burst onto the scene in Bellator. Now, a fellow prospect stands in his way in Italy. McKee and his opponent, Danilo Belluardo, are both only 21-years-old. They have been mavericks in the early stages of their professional careers.

McKee has been an absolute stunner for Bellator so far. He hasn’t shown any real signs of weakness, using exceptional grappling and knockout power en route to his unblemished three-fight record. McKee’s striking has been on great display for someone of his age. He is very diverse with his strikes. His last two fights have ended with straight knockouts from a punch and a knee, respectively.

Belluardo has fought mainly in his backyard of Italy, where he has finished three opponents. He is another fighter who is well rounded with decent grappling and power in his strikes. However, Belluardo isn’t as well rounded as McKee and does make mistakes that better fighters could capitalize on. McKee is the best opponent Belluardo has faced so far in his career, and if Belluardo makes the little mistakes on the ground or exposes himself on the feet, then McKee will make him pay.

Belluardo has home-field advantage, but McKee is the better fighter. McKee by knockout.

Anastasia Yankova makes her Bellator debut in Turin against Anjela Pink, who is making her professional debut.

Yankova was one of the bigger signings Bellator made earlier this year with the introduction of the women’s flyweight division. She seems to be getting an easy layup here, assuming she can avoid making any mental or physical mistakes in this fight. The 25-year-old enters this contest with a lot of hype, thanks to both her looks and her skills. This appears to be nothing more than a build-up fight for the Russian.

Yankova is a striker with a background in kickboxing. In MMA, though, her two victories came on the ground. Those two victories were an armbar and, more surprisingly, a scarf hold. Yankova’s opponents combined for a 1-3 record, though, so she hasn’t been tested by the stiffest of competition. She isn’t facing a fighter with a ton of MMA experience here either.

Pink’s best chance may come on the ground. She’ll have to secure the takedown early and often, though. Winning this fight on the feet will most certainly be a more difficult challenge, whereas the ground plays more into her favor and closes the skill gap. Think of it as a similar route to victory as Rebecca Ruth took against Lena Ovchynnikova at Bellator 150.

This should be a setup fight for Yankova before she advances on to compete for the inaugural women’s flyweight belt.

Out of all the fights possible, Bellator decided to pit two Italians against each other to kick off the main card.

Daniele Scatizzi, who trains out of SBG Ireland, is one of the better young prospects coming out of Italy. He has stumbled in recent outings and hasn’t won a fight in just over a year, going 0-2 in that span. Scatizzi is still young and has some potential moving forward. One of his defeats came in a decision loss against Marvin Vettori, another bright Italian prospect, in a title match at the inaugural Venator FC event.

The 22-year-old Scatizzi, who has four TKO wins, does have some power in his hands. He has fought mostly under the Venator FC banner, where he suffered his two most recent losses. Scatizzi has also bounced around between welterweight and lightweight, so it will be interesting to see just how this plays out against Miceli in a featherweight match. Scatizzi will enjoy a few inches in height, plus an edge in size, against Miceli. This could allow Scatizzi to dominate the outside and overpower on takedowns to eventually lead to a knockout victory.

This will be Miceli’s third professional bout, which means the experience edge is undoubtedly in Scatizzi’s corner. Miceli hasn’t fought somebody at the level of Scatizzi yet. His previous opponents are a combined 5-6. Scatizzi’s strength of record isn’t much better, granted, but even his losses have come against much better competition.

This looks like a showcase bout for Scatizzi, who is making a leap to the big time with Bellator but also has an upcoming fight with Cody McKenzie slated for Venator FC 3.

Scatizzi by TKO. No matter who wins, forza Italia.