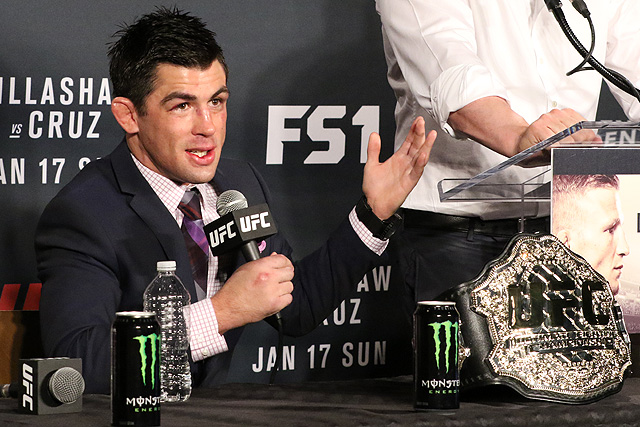 Throne Reclaimed: UFC Bantamweight Champion Dominick Cruz Has a Target on His Back

“Come at the king, you best not miss.”

If you didn’t watch The Wire, not only are you a poor, deprived soul who’s missing out on one of the greatest television shows of all time, but you also have no idea who said these quoted lines.

Who said them isn’t really important (except for the first one, which was uttered by one of the greatest television characters of all time, Omar Little). The message from both is clear: If you come after the top guy, you better bring your A-game or you will come up short. Former UFC bantamweight champion T.J. Dillashaw learned that the hard way when he faced Dominick Cruz at UFC’s recent card in Boston.

Nearly five years after he was forced to vacate the title due to injury, Cruz reclaimed the bantamweight championship he never lost. It was a close, split-decision victory over Dillashaw, and one that might lead to an immediate rematch between the two men. For now, the king of UFC’s bantamweight division has reclaimed his throne.

But what does this mean going forward? It wasn’t too long ago that it seemed the division was a little shallow in terms of talent. There were discussions that the next possible superfight in the UFC would be between Dillashaw, when he was still the champion, and UFC flyweight champ Demetrious Johnson. Both guys were seen as having cleaned out their divisions, and Johnson previously competed at bantamweight before dropping down a weight class.

Now, there’s still the attractive champion vs. champion fight between the re-crowned bantamweight champion Cruz and Johnson. It would be a great match-up. These two squared off once before, on a UFC card in Washington, D.C. in 2011. Johnson held his own in the striking department against Cruz, but he was done in by Cruz’s excellent ground game.

But let’s say the UFC decides to hold off on booking any more “superfights.” Is the UFC’s bantamweight division deep enough on its own to provide Cruz with enough worthy challengers?

Besides a possible rematch with Dillashaw, Cruz could have another piece of unfinished business: a rubber match with his longtime rival, Urijah Faber. The two have already faced off twice before, with each fighter holding a victory over the other. Faber has won three out of his last four fights, and it’s likely neither he nor Cruz would need much convincing to sign a contract to square off a third time.

A particularly intriguing fight for Cruz would be against current free agent Aljamain Sterling. Sterling just fulfilled his UFC contract and still sports an undefeated record. He seems to be enjoying his free agency and has made no secret of his desire to get paid like a top-level prospect and fighter (as he should). Sterling will likely re-sign with the UFC (there’s no information to back this up, just a hunch) and since only four of his 12 victories have come via decision, he could be just the fighter to push Cruz to his limit.

There are other contenders to keep an eye on in the UFC’s bantamweight division. There’s the returning Michael McDonald, who competed for the first time in three years at UFC 195 earlier this month. There’s Raphael Assuncao, who’s on a seven-fight winning streak. And John Lineker, who brings heavy hands to the bantamweight division after battling weight issues while competing at flyweight.

Cruz has reclaimed his throne as the top dog in UFC’s bantamweight division. But, as the old saying sometimes goes, uneasy is the head that wears the crown. “The Dominator’s” road doesn’t get any easier. It’s only just begun.