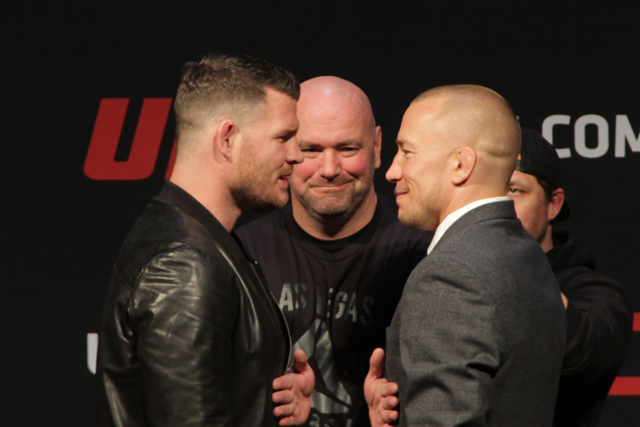 Georges St-Pierre. His name is going to be thrown around in any discussion about the greatest fighters of all time.

He’s might not deliver the highlight reel of finishes that Anderson Silva and Jon Jones do, but his willingness to routinely defend his belt against the top fighters of his division gives him real credibility in the discussion. Although a strong case can be made that Frank Shamrock was the first complete mixed martial artist to compete in the UFC, GSP took Shamrock’s blueprint and amped it up. Better in most — if not all — areas than Shamrock, St-Pierre was the UFC’s version of Oscar De La Hoya, a bankable star who during his prime fought largely in his own division and mostly won.

The last time we saw St-Pierre in the Octagon was on Nov. 16, 2013. He took a beating at the hands of Johny Hendricks, but he still won a split decision. He proceeded to walk away from active competition for varying — though never crystal clear — reasons. There was even speculation at the time that St-Pierre had gotten someone pregnant. Since his retirement, nothing. It’s been pretty tame. He has continued to train, and the fans have clamored for his return. Who exactly they wanted him to face all this time was sort of unclear. There was the aforementioned Silva, in a long unfulfilled fantasy fight.

Michael Bisping is one potential pairing for GSP that was most likely not what the fans were looking for or expecting. But here we are. The fight announcement has been met with pretty widespread criticism. However, this criticism is short-sighted. This may be the fight that this division needs to get the mainstream excited again.

Is GSP a great trash talker? Well, no. However, he has been a good foil to those who are. B.J. Penn, Josh Koscheck, Dan Hardy, Matt Serra and Nick Diaz all tried and failed to get inside St-Pierre’s head. What he lacks in bravado, he makes up for in realism. He is able to be honest in promoting a fight, both about himself and his opponent. This cuts through some of the BS and allows him to refute some of the hyperbolic claims his opponents will make. Bisping has been known to make such claims.

This is an area where Yoel Romero, another possible opponent for Bisping, would fall short. He tries his level best and it’s not all his fault, but his trash talk ends up coming off more as comedy than anything. The biggest example of this was the nonsense of him screaming at Bisping from the Octagon, calling him “boy” and saying he loved him. It didn’t really do more than what just touting their skills would have done.

Luke Rockhold and Chris Weidman aren’t bad choices for Bisping, but both fall into the trap of feeling so far above Bisping in terms of skills that they don’t engage in real banter. Ronaldo “Jacare” Souza, Gegard Mousasi and the aforementioned Silva are always sort of hit and miss, somewhere between not good and don’t care, when it comes to providing pre-fight hype.

GSP is much closer to the Mount Rushmore of MMA than Bisping probably ever will be. But St-Pierre built that resume a long time ago, and he did it in a division that was 15 pounds lighter. This means that even though St-Pierre is a more skilled, more complete fighter, the fight gets closer when the extra handicaps of changing weight classes and ring rust are factored in.

St-Pierre has an advantage in the grappling department, but the edge in striking probably goes to Bisping, despite St-Pierre’s great movement on the feet. This is in stark contrast to the rest of the division, most of which is perceived to be better than its champion. Rockhold, Weidman, Jacare and Romero all are publicly perceived as fighters who could take Bisping’s belt if they fought him next. This may be the reason why Dan Henderson and, now, St-Pierre have been served up to the Brit.

There are so many things going on in Bisping’s life outside of the cage, and there seems to be a feeling both he and the UFC are looking for an exit strategy. Between his burgeoning career as both an actor and an analyst, and the fact that his eye isn’t looking any better, the UFC may need a champ with more road ahead of him. The exit strategy might be St-Pierre.

If Bisping ends up dropping the belt to GSP, then most in the UFC brass will probably not be heartbroken. St-Pierre is an upgrade on a lot of fronts. He’s a more marketable fighter, who is younger and, depending on results, will have a much longer career. He also has fighting at welterweight as an option, whereas Bisping has been exclusive to the 185-pound weight class ever since dropping down from light heavyweight.

As we spin the middleweight division forward, there are also a lot more compelling fights for St-Pierre than there are for Bisping. All of the aforementioned contenders make for interesting fights for GSP, but there are two additional fighters and an old friend that really ramp up interest should the Canadian win.

The old friend is the aforementioned Silva. If the goal is pay-per-view buys, the answer is a fight between GSP and Silva. The Bisping fight makes money. GSP/Silva makes money, too. It’s like Manny Pacquiao and Floyd Mayweather, Jr., in that it doesn’t matter that we get the fight five or seven years after we wanted it, because it’s still compelling.

Then there are Kelvin Gastelum and the aforementioned Hendricks.

Gastelum represents a proven winner who just seems to always be a little better than his opponents while continuing to improve. The Ultimate Fighter winner is not a big-money draw, but he represents what GSP’s opponents used to be. He’s skilled enough to put some doubt in the mind of fans and make the fight a must-watch.

Hendricks, on the other hand, represents one of the only ass-whoopings GSP ever received inside the Octagon. The Hendricks fight is what many fans believe to be the point where St-Pierre, who won a very controversial decision, said it’s time to get out while the gettin is good. He retired a champ amid controversy as to whether or not he was the best 170-pound fighter in the world. Another fight for GSP against Hendricks is an opportunity to clean up this part of his resume. GSP has avenged every relevant loss he ever had, but he still has to avenge his near-defeat.

An added bonus for Gastelum and Hendricks is that they fought each other at UFC 200. If either fighter can beat GSP, it sets up a fight with the other man.

There’s a lot for St-Pierre at 185 pounds. It all starts with the fighter in the division that he can most likely beat at this point in his career: Bisping.