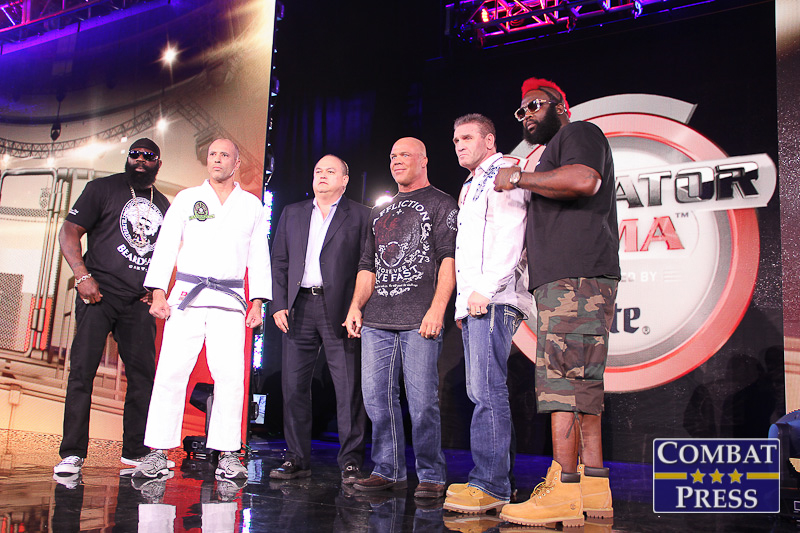 Like It or Not, Bellator MMA’s Approach Brings Attention to the Sport

The freak-show fight has long been a staple of mixed martial arts. From the very beginning, these fights were put together to pull in viewers. They became a big part of early MMA. Now, in a more modern era of the sport, it isn’t surprising to see the freak-show fights starting to rise once again.

The UFC has really tried to stray away from these sorts of oddball match-ups in an effort to look more legitimate as a sport. At the top of the heap, the company sets the trend for how the sport looks to the casual person. Non-followers of MMA sometimes frequently refer to the sport as “UFC” much like how we refer to football as “NFL.” Furthermore, the UFC doesn’t need to put these match-ups together to bring in eyeballs to its product.

Granted, there have been some deviations from this norm, including the UFC’s signing of former WWE superstar CM Punk, who has been brought into the fold without any semblance of a martial-arts background. His impending debut could technically fit the definition of a freak-show fight if somebody really wanted to label it that way. We’re also now six years removed from the magical Randy Couture and James Toney fight that was destined to be a one-sided trainwreck. However, these are the exceptions. From month to month, though, the UFC trends away from these match-ups. They aren’t a normal part of the organization’s fight-card lineup.

Again, the UFC doesn’t need the viewership these fights bring. The promotion is at the very top of the MMA mountain. There isn’t a company at this moment that can challenge the UFC for dominance in terms of star power, a skilled roster or marketing prowess. The UFC is simply the best the sport has to offer.

But when we turn our eyes to the smaller promotions, we have to look at how these fights affect the attention an organization receives. These fights give a company the ability to syphon off some fans from the UFC while also bringing in the people — non-fans — who want to see someone like Kevin “Kimbo Slice” Ferguson in action.

Slice has long been a controversial name in MMA dating back to his first professional fight in 2007. The more passionate fans of the sport held some disdain for a street fighter who became one of the most marketable fighters without ever having stepped into a cage professionally. Yet, it was Slice alone who was able to carry a promotion to CBS, making EliteXC the first promotion to air on a major broadcast network in the United States.

What kind of fight headlined on CBS? That would be Slice’s scrap with James Thompson. It was a freak-show fight and it held top billing on a primetime card.

This isn’t something new to the sport. It’s long been used to help bring in viewership for smaller promotions. Recently, Bellator has taken a step forward and used this approach in the modern era. The next major event coming up for the promotion will feature a fight between two legends of the sport, albeit two 50-year-old legends. These legends are Royce Gracie and Ken Shamrock, a pair of names that resonate with most MMA fans. On the very same card, Slice makes his return to the cage after a submission victory over Shamrock to engage in a feud with Dhafir “Dada 5000” Harris.

It’s only been recently that Bellator has taken this page from the Pride handbook. These fights are no joke either. The Slice/Shamrock bout stands as Bellator’s highest-viewed card, beating the previous record by 27 percent. The previous recordholder? It was another fight that could be thrown under the “freak show” label: Stephan Bonnar and Tito Ortiz.

Not many people will like the moves Bellator will make as it shift toward this direction to try to compete with the UFC’s televised viewership numbers. However, this tactic has been proven to work. The fights bring in viewers who may tune in a little early and catch some of the younger, lesser-known fighters. Even on this upcoming Bellator card, viewers may tune in for Slice, Shamrock and Gracie, but also see someone like Emmanuel Sanchez, a great prospect and upcoming fighter in the Bellator ranks. These freak-show fights are good for the other fighters on the card as well, including current and future champions who have yet to establish themselves as household names despite their accomplishments with the promotion.

So, before labeling these tactics as a joke, we have to realize they succeed. They may create fans, help smaller promotions compete in a market dominated by the UFC or bring in viewers to see other fighters they may not have known previously. These things only help build the sport, not hurt it.