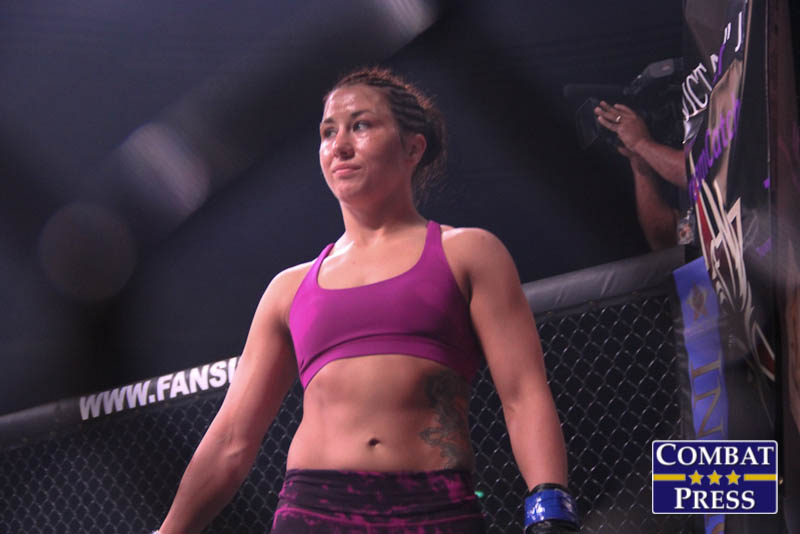 Dreams do not only exist in your imagination. Although the ones that occur in your sleep may be far-fetched and unattainable, others require hard work and dedication to bring to fruition. However, not all dreams are created equal.

Strawweight Sharon Jacobson didn’t grow up aspiring for success in combat sports. The two-time national champion wrestler had no idea what the future held when she first stepped onto a wrestling mat at the age of 16.

“I thought I’d be avoiding PE class and that would be about it,” Jacobson said with a laugh. “I actually ended up having to take a weightlifting class my senior year because even though my coach gave me a letter [for wrestling], I was never actually on the men’s team. They had a women’s team, but it always fizzled out, so I never officially received a letter for it. For some reason, it didn’t count as a PE class. So it still came back to haunt me.”

There was more to the story, though. The active-duty Army Sergeant and Invicta FC fighter had other reasons for choosing wrestling over a normal gym class.

“I really didn’t like that I had to wear a uniform every day. Which sounds funny now that I’m in the Army, but I was a poor kid and I couldn’t afford more than one set. So bringing it back and forth every day was just a hassle. It would get stinky. It didn’t make sense to me that I had to pay money for a uniform,” explained the 32-year-old.

“That’s also why I chose wrestling. It’s a poor sport. Pretty much all you need is some wrestling shoes and a U.S. wrestling card.”

Whether she expected it or not, Jacobson’s wrestling career took off. Following high school, she wrestled at the University of Minnesota at Morris and captured the 2006 U.S. National Title at 121 pounds. In 2008, she enlisted in the Army as part of the World Class Athlete Program (WCAP).

“I definitely saw it as an opportunity to further my wrestling career, but you get paid while you train, which isn’t normal unless you have sponsors,” she revealed. “I take pride in wearing that uniform and representing the United States as an athlete and a soldier. I don’t just wrestle. I’m a Horizontal Construction Engineer.”

Now in her second stint with WCAP, Jacobson is enjoying herself more and still growing as an athlete.

“You have to have a job, and every three years you get released to do that job and you come back a year later. You have benchmarks you have to meet. You can look at it as a driving force or as a lot of pressure,” admitted the Colorado Springs resident.

“I feel like the first time I was in, there was so much pressure and it stressed me out. Now that I’m back, I’m just having fun with it.”

During Jacobson’s last break from WCAP, she discovered mixed martial arts. After spending most her life on the wrestling mats, the new sport was invigorating and, despite its own challenges, less taxing on the body.

“I don’t like to talk about my age, but I’m not 18, I’m not 21 anymore. The American mentality with wrestling is go, go, go, grind, grind, grind,” Jacobson explained. “I’ve wrestled for 16 years and to be able to go to boxing practice and focus on something new, it’s refreshing.

“When I only have wrestling, I feel the pressure. Now that I have MMA too, I don’t. I’m more than just a wrestler. I go to jiu-jitsu practice to mix it up. Then I go to wrestling practice and kick some butt. Before, I would think it was hard and I’d get it handed to me. But when I come back feeling refreshed, it’s more exciting and fun.”

The biggest challenge for Jacobson has been finding time. With a new passion for MMA, she had to balance her wrestling career and serving the country.

“It’s actually kind of hard,” Jacobson admitted. “Being in the Army and on the National Team, there’s so many requirements. My job in the Army is to wrestle.

“I have to do [MMA] on my own. I have to go and get a third or fourth workout in. But those are more fun. The boxing coach from WCAP is opening up a boxing and MMA gym. I work with them a lot. It’s good. I feel like I have a second family in them.

“I have a wrestling family and a boxing family. They’re all very supportive. They find time with me. I have to go above and beyond.”

Even with such a heavy workload, Jacobson managed a remarkable feat in 2015. Nine years after capturing her first U.S. Nationals title, she repeated it this spring.

Just before Nationals, Jacobson made both her Invicta FC and strawweight debut against Delaney Owen after initially signing with the promotion as a flyweight.

“I was walking around at 130 [pounds], so it didn’t make sense for me to cut five pounds to fight girls that cut 15-20,” said Jacobson. “I have a smaller stature and I feel more comfortable. I’m lighter and faster. I still have my strength. I think Delaney thought I was a lot bigger than I was. I just feel like this is a better weight for me.”

Jacobson scored a unanimous decision win over Owen, but that wasn’t the only good part of her experience with the world’s largest all-women’s promotion.

“I love Invicta,” she exclaimed. “I was really excited about it. My teammate Randi Miller was on Invicta FC 1. Raquel [Pennington] was on it. Cat [Zingano] was on it. I knew what the process was like.

“I was excited about media day and taking pictures. It was all very positive. It was fun. Invicta embraces diversity. They embrace looks, personalities, whatever.”

Her win over Owen was her third professional win, as well as her third straight victory. However, it was the first time she went the distance.

“I was kind of pissed because I really wanted to finish. It’s a huge rush. It’s like a drug — once you taste it, you want more,” joked Jacobson. “It was a little bit disappointing. She got me good a few times, but I was able to come back from it. I don’t want to do that with every fight, but if I have to, I will.”

Now, the Colorado-based fighter will turn her attention to unbeaten Jamie Moyle at Invicta FC 14 on Sept. 12 in Kansas City, Mo. But she’s not stopping there. There’s another dream already in the back of her mind.

“I feel like every fight I take the same approach. I definitely have respect for them and their skill set, but I plan on going in there and beating them up. Doing my thing. If she gives me something, I’m going to take it. I hope to win in dominating fashion,” said Jacobson.

“Obviously, I want that belt. It’s not a like a tournament where you can just go through it in one day and get it. It’s a process; it’s different. I don’t see it as pressure. I don’t see it as ‘I have to win’ because of it. I see it as I’m going to win because I have the skill set and the determination.”

That determination is one of Jacobson’s biggest attributes and she’s out to prove through her performances in the cage and on the wrestling mat that others can follow in her footsteps.

“I hope to inspire people. I feel like it’s never too late if you still have it in you. I just hope they see me as a respectable role model for younger generations in wrestling and MMA,” she said.

“My name’s ‘Dreamcatcher’ and I want to catch those dreams. I’m tired of chasing them and coming up short. I’m in it to win.”

If Jacobson’s journey from trying to skip out on gym class to National champion to Invicta combatant is any indication, her dreams are well within reach.

Sharon would like to thank Heavenly Father, her family, the coaches and athletes at WCAP, Prime BJJ, Triple Threat MMA and Boxing, Lashifyme.com and One Yoga USA. Follow her on Twitter: @MMADreamCatcher