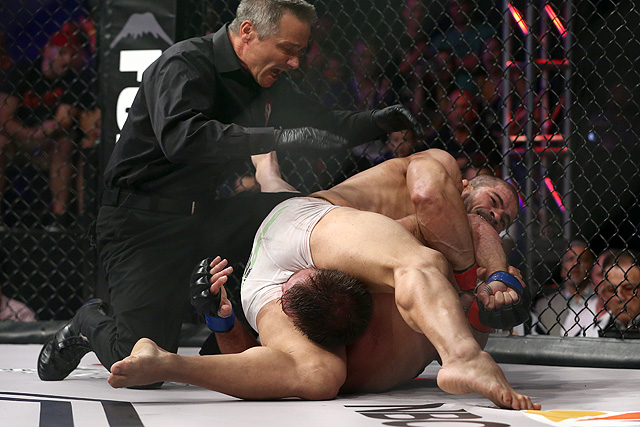 WSOF 22 Drew Headlines for All the Wrong Reasons

Heading into last weekend’s busy Saturday night, I wrote about World Series of Fighting 22 and how it was all but destined to be forced into the background due to Ronda Rousey and UFC 190. Even though the fight card was really good by WSOF standards and featured just enough former UFC talent to draw a casual fan or two to the broadcast, it was clear that the promotion was going to need something monumental to happen at the event in order to compete with the UFC’s offering.

If you’ve been paying attention to the news this week, it’s obvious it would have taken something like aliens invading the Planet Hollywood Resort for the WSOF event to overshadow Rousey’s performance. Well, aliens didn’t invade. However, the WSOF card probably ended up making a few more headlines than many fight fans thought possible opposite the sport’s juggernaut. Unfortunately, those headlines weren’t exactly the kind of publicity the promotion was hoping for following a pretty good show on Saturday.

When fight fans look back at WSOF 22 in a few years, it’s going to be remembered for two things.

For one, it’ll be remembered for the wild cageside brawl between Khabib Nurmagomedov and the Diaz brothers. There had been a lot of tension building between Nurmagomedov and Nate Diaz on social media over the last few months, and everything came to a head when they ended up crossing paths in Las Vegas last weekend. A quick scuffle between Nurmagomedov and the younger Diaz (along with a multitude of others) was broken up inside the arena, but the chaos ended up following the fighters throughout the night. A beer thrown by the elder Diaz apparently ignited the brawl a second time, and a third fight that broke out in the casino not too long after that featured a folding chair flying towards Nate’s face.

The other thing fight fans won’t be likely to forget is that this was the weekend where the dirty reputation of welterweight champion Rousimar Palhares caught up to him in a big way. During a heated prefight build-up, Jake Shields brought the Brazilian’s issues to the forefront and made it clear that he wanted to punish the grappler for his tendency to injure opponents by holding onto submissions in the cage. As it turns out, that was only one of the illegal tricks Shields was going to end up having to worry about. About midway through the fight, Palhares allegedly started gouging at the eyes of his opponent, and when he finished Shields a little later with a kimura, he did exactly what he couldn’t afford to do and held onto the hold way too long after the referee called off the fight. A quick investigation prompted the WSOF to strip the controversial Brazilian of his title and ended up costing Palhares the majority of his paycheck following the fight.

Both of these scenarios are embarrassing for MMA in general. Despite the added publicity all of the drama brought to the event, these incidents definitely didn’t help the WSOF in the long run either.

A cageside brawl, as unprofessional as it is, is almost a guaranteed way to spark up some fan interest and possibly get a nice rating in the future. Of course, that only works when you actually have the contracts of the fighters in question to set up a sanctioned fight. Nurmagomedov and Diaz are both contracted to the UFC, so while they may have earned WSOF a few headlines this weekend, they also essentially used a rival promotion’s event to set up a bout inside the Octagon (if Zuffa wants to make it happen). In no way am I suggesting the brawl was set up intentionally, but you’re kidding yourself if you think UFC President Dana White didn’t have a little bit of a smile cross his face when he found out that two of his high-profile lightweights were setting up a grudge match while he was thousands of miles away in Brazil.

On top of having its show overshadowed by a couple of fighters from a rival promotion, the WSOF suffers a major blow in losing Palhares as a champion. Given the tendency Palhares has to apparently lose his mind inside the cage, the WSOF made a major gamble when it signed the Brazilian following his UFC release. However, the gamble had seemed to pay off prior to the Shields fight. Palhares had scored a couple of incredibly impressive wins in his first two bouts in the organization, ending two title fights in less than a combined three minutes. If he had been able to escape the cage with the win over Shields and minus the controversy, the promotion would have a really intriguing welterweight division right now. Instead, the WSOF spent the first part of the week disciplining a fighter who could have been considered one of the best welterweights in the sport if he had been able to keep his act clean.

To the WSOF’s credit, the company handled both of these situations as well as it possibly could. The promotion has already made the smart decision of banning the Diaz brothers from any future events, which is totally understandable considering their history. And stripping Palhares of the belt was the only thing the promotion really could have done due to his obvious disregard for the rules on Saturday. However, considering these storylines are the most interesting thing that’s happened in the WSOF for quite some time, it’s unlikely that these debacles will blow over quickly. The surprising amount of headlines the promotion made last weekend may have saved the event from becoming invisible next to Rousey and company, but the long-term effects are going to stick with the promotion.