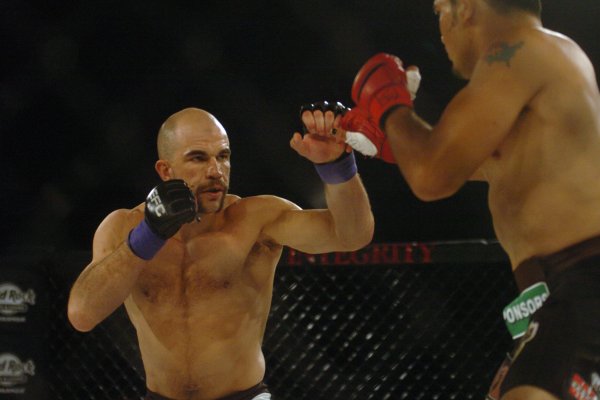 The first time a white belt is fastened to a gi, it signifies the beginning. It’s the first stage of development for a jiu-jitsu practitioner. It’s not so much about the belt itself, though. Instead, it’s about the knowledge that awaits.

There truly is nowhere to go but forward. When Dave Mazany first laid eyes on his white belt, he was just starting out with what was set to become his life’s passion. The white belt was only the beginning.

“Before I tied a white belt on my Gracie Barra gi, I visualized winning a championship in Alaska, moving to a training camp in Japan and fighting over there,” Mazany recalled to Combat Press. “I never spoke of this to any of my teammates. I just trained hard with my vision in mind, but it got me to that first fight. My career has gone a little differently and the MMA scene has changed. I packed my things [and] moved to Las Vegas, and I have had the opportunity to fight in Australia, Canada, all over the U.S. and, of course, South Africa.

“I’ve won titles [and] beat giants in the middleweight division — as a natural lightweight. I’ve sparred with legends and made friendships and connections that I never dreamed of. If I step back and look at everything, it’s surreal. But greatness is my vision, so I’m not surprised. I’m expecting more.

“Growing up as a kid, I thought kung-fu movies were awesome. Also, I was a big fan of professional wrestling. The idea of fighting for competition always seemed cool. For some reason, I started late. I was a dedicated athlete. Ice hockey, track and field, cross-country skiing and running were what I did through my youth, and I was a [NCAA Division II] track-and-field athlete. And I didn’t officially start in martial arts until I graduated college. I watched all the UFCs and felt like I was [a] pretty educated fan, so I picked up MMA nicely.”

A lot of years have passed since Mazany first tied that white belt around his gi. His first professional fight took place in 2007, but the 17-fight veteran still has more than enough spark to allow him to continue stepping into the combat arena. There’s something about fighting that he loves. There’s something about the whole experience that keeps him coming back for more, year after year.

“I don’t know if you have heard the term ‘chasing the dragon.’ It’s often used to describe a drug addict’s craving for his or her very first hit,” Mazany said. “Apparently, an addict is obsessed to finding that first high, but honestly nothing compares. I feel the same way with MMA. My first fight in Fairbanks, Alaska, was in a ring in a hockey arena with a handful of people in the crowd and I got a 20-second knockout, and I can’t think of a fight that got me more excited than that one. I’m chasing a thrill and I’m addicted to the rush of training hard, the build-up and then the fight. A fight gives you an intense purpose like none other, and only a fighter or a fellow elite athlete could understand this.”

Mazany is set to make his return to the Extreme Fighting Championship Hexagon nearly five years after he first fought for the promotion. Back then, he was a relatively fresh fighter on the scene and was in the midst of a three-fight skid. Without a victory to his name in over two years, Mazany flew across the world to fight Wentzel Nel and won a fight that would help steer his career back on track.

“The economy was down, nobody was throwing shows and, other than UFC, there are no local shows in Vegas, so I was training hard [and] looking for a fight,” Mazany recalled. “When I got that fight, I felt like I was on a rollercoaster coaster, not in control of the ride. From a career-building perspective, I shouldn’t have taken that fight on 10 days’ notice against a champion. Also, nobody knows this, but I threw my back out three days before my flight. Odds were against me, but it all worked out in the end.

“Although I was in great shape and the training I had in Vegas increased my skill level a lot, my confidence was low. The fight [against Ryan Ford] before the EFC fight, I suffered a compound nose fracture and a broken orbital which required reconstruction. I didn’t have medical insurance, and I had to pay off a bunch of medical debt. It was funny when I sunk the choke in deep — my first thought was, ‘How is he gonna get out of this?’ and then he tapped. My mind was blown, and that fight re-birthed my career.”

As a professional fighter, Mazany has traveled to many different corners of the globe. Since 2007, he has fought in four different countries and has even had the opportunity to fight in front of some locales multiple times.

“Australia was beautiful and a great experience, but my short time in EFC was unreal and I have the most exciting memories associated with it,” he said. “I was surprised that the fans took me in and didn’t boo me and they were really nice after. The promotion treated me well and I met great people on the way. South Africa has been the best so far.”

With the good comes the bad. While his travels around the world may not have led to any horror stories, the same cannot be said of the outcomes of some of his fights.

“I’ve had terrible fights when things got broken and my heart was crushed,” Mazany said. “Being successful in life requires thousands of failures and bad experiences. The people who gain success observe their bad experiences, dust themselves off, adjust and keep moving forward. I’m proud of all of my experiences. Those are what make me ‘The Pain Train.’”

Those bad experiences were a contributing factor that led to Mazany spending two different extended stints on the sidelines.

“There were a couple setbacks,” Mazany revealed. “One was against Ryan Ford. I broke my orbital and nose and had to get it repaired, and I had to pick up a lot of work to pay it off also. That was when I packed my life into my pickup truck and drove from Alaska to Vegas.

“Later on, there was a fight against John Alessio that went down to a no-contest from me accidentally poking his eye and tearing his retina. Before the eye poke, I broke my hand in the first minute of the fight. That took a while to heal. I didn’t see the doctor as much as I should have for it, but I didn’t have the money to pay for a specialist. I actually had a fight signed against the champion of Pancrase in Japan after the hand was healed, but then I reinjured it in practice. It took a long time to heal and then, after it healed, I shifted gyms. So that took a long time to adjust to. I moved from Wand Fight Team to Xtreme Couture.”

Typically, Mazany fights wherever he can secure a match-up. However, now that he has signed a contract with the EFC, he will have some stability and the guarantee of fighting for the same company.

“I couldn’t be more excited to have a promotion like EFC sign me for a multi-fight deal,” Mazany admitted. “This is new. I have never had a multi-fight deal with a company. Ninety-nine percent of the time, I’m the fighter that is brought in to lose. When I win, they usually don’t have me back. I’m excited to cut interviews and fight in front of a group of fans more than once. I want the fans to get an idea of who I am and what I’m about. I feel I can bring a lot to an organization.”

When he steps foot inside the Hex on Aug. 8, Mazany will square off with hometown fighter Sibusiso Mdoko. Throughout his career, Mazany has fought away from home. That has been a given for Mazany. Each and every time, he does his best to relish the opportunity and try to win over new fans in cities around the globe.

“It would be weird if I was the hometown fighter,” Mazany said. “I’ve always been the guy who isn’t from that town. I haven’t slept in my own bed before a fight since 2008. There is pressure on this fight, but it’s not pressure that I haven’t felt over and over. I feel like I’m a veteran fighter and I’m going in to do my job. I’ve seen a lot of crazy stuff in this business, and it’s getting harder and harder to surprise me with an uncomfortable situation.

“This run in the EFC is exactly what I have been working for. I’ve always wanted an organization to give me more than one fight. I want to be able to promote myself and get to know a group of fans. But there is not much difference between this fight and any other fight. It doesn’t matter if there are 10 fans or 10,000 fans, it’s still the biggest fight of my life.”

Dave would like to thank Fight Labs Supplements, War Tape, Xtreme Couture, Hybrid Performance, Mike Smith and Blacksmith Boxing and his manager, Chuck Wichert. He would also like to thank EFC for giving him an opportunity to compete again. Follow Mazany on Twitter: @MazanyMMA
Advertisement