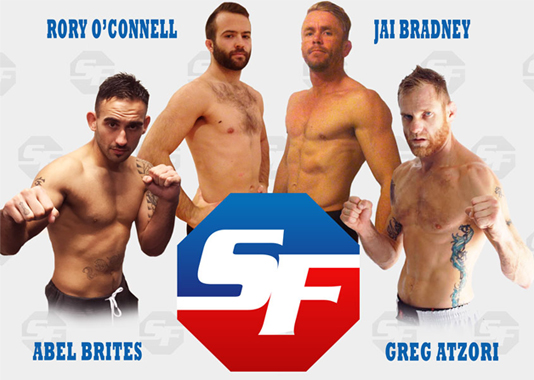 Superfight has booked the first two bouts for its inaugural event.

Combat Press has learned from the promotion that its debut event,  scheduled for Aug. 21 at Club Punchbowl in Sydney, will feature two headline bouts. Jai Bradney will be meeting Rory O’Connell in the featherweight division and Greg Atzori will square off against Abel Brites at lightweight.

Bradney, a 28-fight veteran, recently put his name back into the winners column when he stopped Raphael Berthet by way of submission in just 21 seconds at Valor 11. It put an end to a four-fight skid for the veteran. The bout was contested at featherweight, and after experiencing a comfortable weight cut, Bradney now looks to return to the featherweight division in an attempt to string together back-to-back wins for the first time in almost three years.

O’Connell will be making his return to professional competition after a two-year hiatus from the sport. In his last bout, which took place in Melbourne in 2013, he defeated Ivo dos Santos by way of TKO. O’Connell had various bouts scheduled to take place during different stages throughout 2014, however they never eventuated. O’Connell has won six of his seven professional bouts, with his lone loss coming at the hands of Rob Lisita.

Atzori, who has not yet competed in 2015, will be looking to continue his winning ways. The Integrated MMA product hasn’t had the best of luck over the past two years, going 2-3 in his last five professional bouts. All nine of his career victories have all come by way of stoppage. He most recently registered his sixth win by way of submission when he dispatched of Brad Terrey in the second round of their Dec. 6, 2014 clash.

Brites is currently riding a five-fight winning streak with all five of those bouts resulting in stoppages. After suffering his first professional loss in the early stages of 2014 at the hands of Taela Kelly, Brites bounced back under the BRACE banner. The remainder of the year saw him go on to win the 2014 BRACE lightweight tournament.

More bouts are set to be announced for the event in the coming weeks.