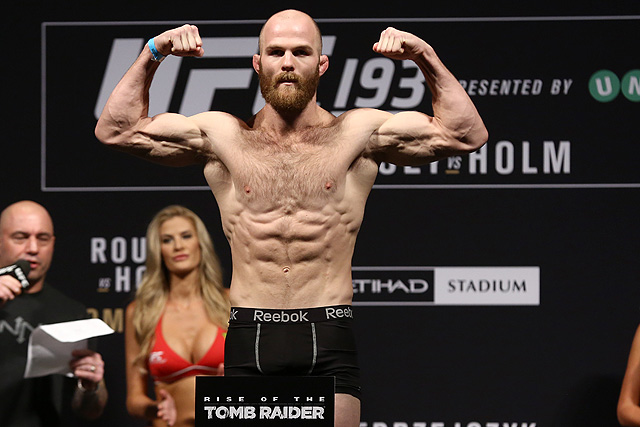 The UFC’s return to Brisbane has added another bout.

Combat Press has confirmed with sources close to the situation that welterweights Viscardi Andrade and Richard Walsh are set to clash at UFC Fight Night 84 in Brisbane, Queensland, Australia on Sunday, March 20 (Saturday, March 19 in North America).

Brazil’s Andrade has won two of his three Octagon appearances, including a decision win over Gasan Umalatov at UFC Fight Night 77 in November. The 31-year-old enters the contest having won eight of his last nine outings. Of his 18 career wins, 11 have come before the final bell.

The Australian Walsh snapped a two-fight skid in his last bout, edging Steve Montgomery at UFC 193 in Melbourne. “Filthy Rich” is a veteran of The Ultimate Fighter: Nations. The 27-year-old carries nine wins on his resume, including four via knockout.

UFC Fight Night 84 will take place from the Brisbane Entertainment Centre. The event will be headlined by a heavyweight match-up between former champion Frank Mir and hard-hitting Kiwi Mark Hunt. The co-main event will feature Cuban judoka Hector Lombard against Neil Magny. The main card will air live on Fox Sports 1. More bouts for the event are expected to be revealed in the coming weeks.