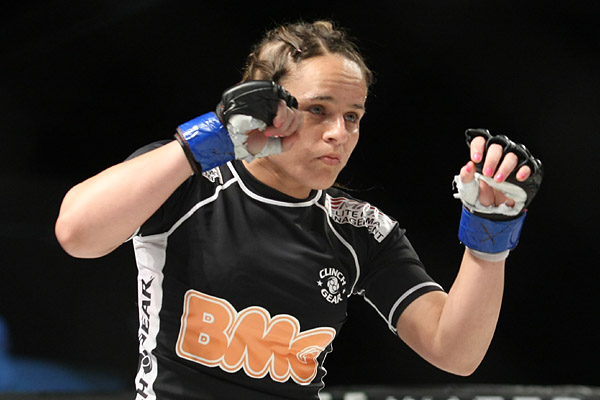 Out of Obscurity: ROTR XXXI, Dakota FC 21 and GotC 1

Rumble on the Ridge, one of the prominent regional promotions within the state of Washington, returns this weekend with its 31st offering. The bill is topped by a showdown for the vacant middleweight title, but the most recognizable name on the card resides in the co-headliner slot, where atomweight Diana Rael meets undefeated up-and-comer Julia Jones.

Rael was formerly a ranked 105-pounder, but a rise in the amount of talent present at atomweight and Rael’s own setbacks have caused her to tumble out of the top 15. In her only fight within the last two years, Rael suffered a TKO loss to Amy Montenegro, but that fight took place in the strawweight division. The loss snapped a two-fight winning streak, which matched Rael’s career best. The 30-year-old debuted in 2010 and has faced notables Michelle Waterson, Lacey Schuckman and Stephanie Frausto in losing efforts over her five-year career.

Jones is still in the infancy of her pro career. After more than a year spent competing as an amateur and another year-plus of inactivity, the 27-year-old finally turned pro in 2014 and fought her way to a unanimous decision victory in her debut. Her second fight came nearly another full year later and resulted in Jones eking out a split verdict. Now, Jones, just three months removed from her victory over Alyssa Garcia, is fighting on the shortest turnaround of her career.

Across her amateur and pro careers, Jones has only managed one stoppage win. As an amateur, she was finished twice. Firen Towanda scored a 48-second knockout to hands Jones her first amateur loss, and Kyra Batara caught Jones in an armbar to extend the fighter’s skid to two straight fights. The Lake Stevens MMA product has had to grind her way to pro wins over opponents who now hold a combined 3-2 mark.

Rael is hovering around the .500 mark, and her inconsistency might even cause her to pick up the underdog tag against an undefeated fighter. However, she should be considered the favorite in this match-up against an inexperienced opponent like Jones. Rael has fought the former Invicta FC atomweight champion and several other notables. Yes, those fights resulted in first-round defeats, but they provide her with a level of experience and confidence that Jones lacks.

Jones doesn’t display much finishing ability, and her chin has failed her before. That is a bad combination to bring into a fight with Rael, who tends to stalk her opponents and launch flurries of powerful strikes. Her aggression has led to mistakes and, ultimately, a few submission losses. However, it has also led to three wins by some form of knockout. She’ll increase that total to four when she meets Jones.

Damm has been fighting professionally for more than a decade now, but she is probably best known to U.S. fans for her lone fight under the Strikeforce banner. The Brazilian veteran boasts wins over Vanessa Porto, Miku Matsumoto, Jessica Aguilar, Kalindra Faria and Aline Serio. However, after building up to a 15-3 record, Damm ran into plenty of setbacks, beginning with that Strikeforce appearance, where she was submitted by Hitomi Akano. It was the start of a tough stretch in which Damm suffered a TKO loss to Cat Zingano, a submission defeat at the hands of Tara LaRosa, a knockout courtesy of Munah Holland, decision losses to Tonya Evinger and Jessica Eye, and a submission loss to the aforementioned Faria. In late 2013, Damm kicked off a four-fight winning streak, but it came to an end in her most recent fight, which she lost via five-round decision to Elaine Albuquerque. Damm is a black belt in Brazilian Jiu-Jitsu and has spent time at the American Top Team and Alliance MMA camps during her lengthy career. Her grappling expertise is evident in her record, which features 10 submission victories, but she has also demonstrated an ability to finish opponents with her fists, something she has accomplished in seven of her fights.

Allen’s resume is a much shorter read, especially at the pro level. The 33-year-old went 5-2 as an amateur from 2009 to 2011, then turned pro in 2012 and amassed her current 3-2 mark over the next two years. The “Black Widow” notched her pro victories against a set of opponents who currently hold a combined 1-7 record. Allen’s losses, meanwhile, came to future UFC fighters Jessamyn Duke and Ashlee Evans-Smith. The fight with Evans-Smith came under the World Series of Fighting banner, and the bout with Duke came in the Invicta cage. The MMA Factory fighter has notched one submission victory and one TKO finish.

Much like the Rumble on the Ridge fight between Rael and Jones, this contest features a clear disparity in experience levels. Allen has fought on some big stages, but she has just five pro fights to Damm’s 33 and she has not encountered anywhere near the same wealth of talented opponents as Damm has seen. Damm’s ability to top the likes of Porto, Aguilar and Faria, among others, is a testament to her skill level. The only knocks on her thus far are her inability to consistently defeat the division’s elite and her past failed drug tests.

In this affair, Damm’s experience and skill level win out. Allen seems more prone to punches than submissions, so that should be the route Damm takes to the victory.

Guardians of the Cage joins the crowded field of Brazilian regional promotions when it runs its inaugural show this weekend. The card features Jeferson Negrini, an undefeated lightweight, taking on upstart Wasley Gomes.

Negrini was a cast member on The Ultimate Fighter: Brazil 4, which aired its first episode in early April. The second episode featured Negrini’s fight to get into the TUF house, but he suffered a TKO loss to Andre Ricardo. The Sombra Team fighter also suffered a TKO defeat as an amateur, but he remains officially perfect as a pro fighter. “Batata” tends to avoid the scorecards in his fights. He has five submissions and three wins by some form of knockout. His resume only includes one fighter who sits above the .500 mark — that fighter is 2-1 — and two opponents who possess .500 records through two pro fights. Gomes will be the most successful fighter Negrini has faced in official combat.

Gomes made his pro debut in 2013 and reeled off three wins before receiving his first taste of defeat. After his loss to veteran Francisco Marinho, Gomes returned with a win over Joao Carlos Dias Filho. The Elite Top Team product has never gone beyond the first round and tends to finish his opponents early. Gomes has submitted two foes and knocked out two. In addition to his loss to a fighter who now holds a 26-4 mark, Gomes has defeated a set of adversaries who currently hold a combined record of 2-6.

Neither fighter has demonstrated an ability to succeed against anything but the lowest levels of competition, but one of these men can take the next step with a victory here. Negrini holds the edge in experience, but his history of TKO losses in non-pro bouts suggests that he may be a prime candidate for a knockout loss in this contest against a quick starter.

Gomes is still at a point in his career where it has made sense for him to take fights against opponents who have had minimal experience and sport shoddy records. His first step up came against a seasoned veteran and he was obviously outmatched. Negrini represents the in-between opponent that Gomes needs. Gomes has an aggressive finisher’s instinct. He has scored a one-minute knockout, and Negrini, coming off a TKO loss on TUF, seems vulnerable against solid strikers. Gomes takes this fight with an early TKO stoppage.