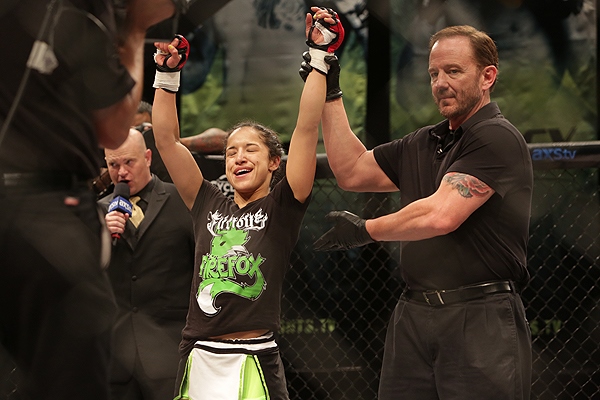 Brazil’s regional landscape just got even more crowded. Invictus Show Fight is joining the fray with its first show. The lineup features two title bouts, including a clash between Paulo Robinson and Fabricio Sarraff for the vacant featherweight crown.

The 25-year-old Robinson has been fighting since 2007. He stumbled out of the gates to three straight losses — two by submission and one via knockout. The Tata Fight Team product took a nearly three-year hiatus from the sport and returned to much better results in 2011. He won three straight fights, all by choke submissions, before suffering his fourth loss. Robinson rebounded with nine straight wins before suffering a recent decision loss to Luis Alberto Nogueira. His most recent fight ended in a first-round TKO victory for the title hopeful.

The 22-year-old Sarraff also got an early start to his pro career. The Bulldog Naldão Team product debuted in 2010 and won eight of his first nine and 11 of his first 13. He hit a snag in late 2012 and early 2013 when he lost back-to-back fights for the first time in his career. It wouldn’t be the last time, however. After winning eight of his next nine, Sarraff fell into a three-fight skid in late 2014 that included a first-round knockout loss to future UFC fighter Dileno Lopes. Sarraff, who has competed at bantamweight and featherweight, rebounded with back-to-back wins.

Sarraff is still young and could develop into a better fighter as he matures, but his multiple losing streaks are a red flag as he enters this fight with Robinson. The 22-year-old Sarraff has lost via strikes twice and suffered one submission defeat. He does have five wins apiece via strikes and submissions, but he’s seen the scorecards 15 times, including in 10 of his victories.

Robinson is a perfect example of what Sarraff could turn into — a fighter with much more consistency. The 25-year-old’s only losing streak came at the very beginning of his career, when he was just 17-18 years old. After his hiatus, he came back strong and put together two solid streaks separated by losses to possibly his two most notable opponents, Jadison Costa and the aforementioned Nogueira. Robinson is a much more effective finisher who has only seen the scorecards in four of his fights. He’s ended the night for seven of his opponents via strikes and four by way of submission. His biggest weakness appears to be submission defense.

Robinson’s consistency and striking abilities give him the edge in this battle of very experienced youngsters. Robinson will overwhelm Sarraff on the feet en route to a TKO victory.

Ultimate Challenge MMA might not enjoy the notoriety that BAMMA and Cage Warriors have seen at times throughout their existence, but the British-based promotion continues to chug along. It’s 44th edition brings in veterans Denniston Sutherland and Bola Omoyele in for a notable clash. It also features a number of prospects, including the undefeated Amir Albazi. Albazi will battle Niko Gjoka for the vacant bantamweight title in one of the event’s featured bouts.

Albazi, a Swedish fighter of Iraqi descent based out of London, made his pro debut in 2009 and amassed a perfect record through four fights by the end of 2010. “The Prince” was absent from the sport for the next four years before returning in November 2014 to claim another victory. He extended his streak to six fights with a March win over Ondrej Moravec. The London Shootfighters product has never gone the distance. He has stopped three foes with strikes and three by way of submission. Albazi is focusing on MMA after claiming a Brazilian Jiu-Jitsu World championship as a blue belt and tacking on a FILA championship.

England’s Gjoka doesn’t have the lofty credentials of his counterpart. He doesn’t enter the bout with a spotless record either. The Asylum Vale Tudo fighter made his pro debut in 2008 and fell in his first three bouts. He has never won more than four fights in a row on his way to a mediocre record that stands just one win above the .500 mark. Gjoka, win or lose, tends to avoid the scorecards. He has stopped four opponents with strikes, but he’s suffered knockout losses in five contests. He has submitted six foes, but he’s also succumbed to three submissions.

Gjoka appears to be a sacrificial lamb being led to the slaughter against an accomplished grappler who made the move to London in order to further his mixed martial arts career. Gjoka’s stats indicate that he can be a threat anywhere, especially on the feet. However, Albazi’s resume also suggests a well-rounded fighter, and the Swede will surely have Gjoka outmatched if the fight hits the canvas. This fight should end with Albazi scoring the submission finish before the midway point.

Undefeated atomweight fighter Julia Jones is already undoubtedly on Invicta FC’s radar, but the prospect will have to continue to earn her dues on the regional circuit for now. Her next fight takes place this weekend at Rock’s Xtreme Fight Night XVII in Texas. Jones will seek to keep her unblemished record intact against fellow three-fight veteran Paulina Granados.

The diminutive Jones is a Russian-born fighter who was adopted at age 11 and made her way to America. The Team Mean MMA product won her first two amateur fights, both against the same opponent, before losing her final two amateur outings. The 27-year-old turned pro in 2014 and made a successful debut against Jenny Silverio. After defeating Silverio via unanimous decision, Jones made her way to the Rock’s series and recorded a split decision victory over Alyssa Garcia. Jones took a big step up in competition for her third pro fight. She locked horns with veteran Diana Rael in the co-headliner of Rumble on the Ridge XXXI and emerged with a second-round submission win.

Granados kicked off her amateur career in 2011, the same year as Jones began her amateur campaign. However, Granados found more success than Jones, scoring wins in all four of her amateur outings. However, three of those victories came by way of split decision. The 27-year-old Texan turned pro in 2013 and reeled off two wins in a span of just over two months. Her third fight, against Tessa Simpson, ended in a unanimous decision loss. Granados has a 46-second armbar submission finish on her pro record. Her two most recent fights took place under the Legacy Fighting Championship banner.

This is a classic striker vs. grappler match-up. Jones is willing to stand and trade, but she’s also aggressive in pursuing the submission finish. This approach has gotten her in trouble as an amateur, but she has managed to remain perfect as a pro and even submitted a high-level opponent. Granados, meanwhile, relies heavily on her striking. She utilizes a Muay Thai style and throws frequent kicks.

Granados, who hasn’t competed in MMA since 2013, often works for a takedown even when it’s not to her benefit. This approach cost her greatly against Simpson. Granados spent the better part of the final two rounds with Simpson on her back. Her power gives her an edge over Jones, who has been knocked out while attacking with submissions, but it might not be enough. Jones transitions well and goes for the finish at every opportunity. Jones isn’t much of a finisher, however, and Granados, despite her deficiencies on the mat, has displayed solid submission defense.

Granados is probably too willing to go to the ground with her opponents, but she’s not an easy out. Jones will test that submission defense, but she’ll have to settle for the judge’s nod against the Legacy veteran.