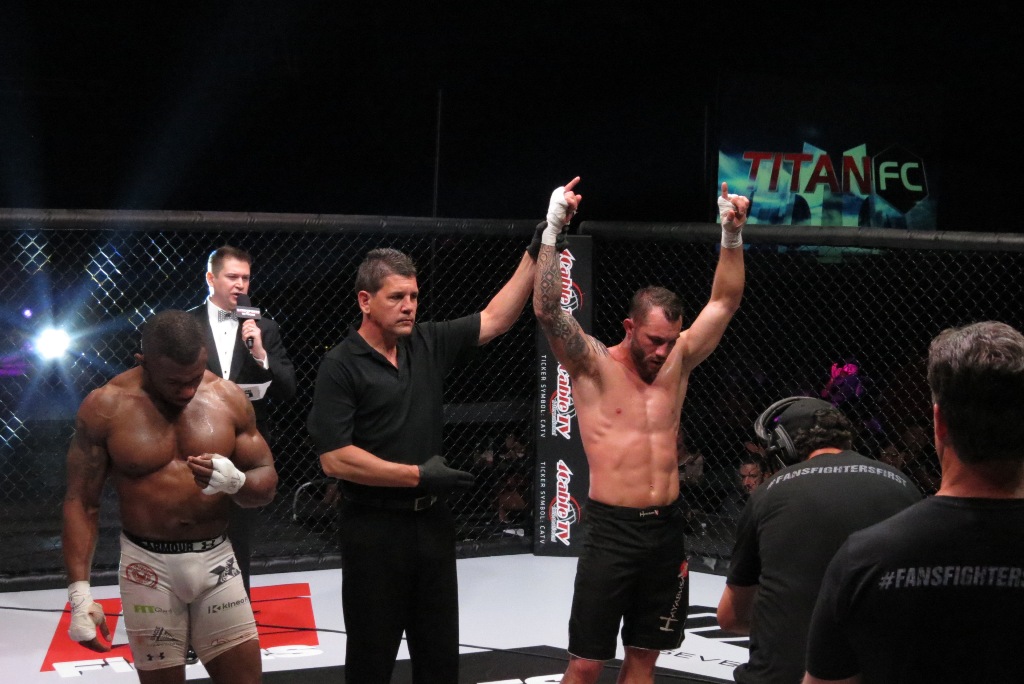 World Series of Fighting’s Brian Foster knows a thing or two about construction. When he’s not training to rebuild an MMA career that got sidelined with a bogus medical report that resulted in his release from the UFC in 2011, he’s working for All State Construction in the Tulsa, Okla., area.

The native Oklahoman has had an amazing 28-fight career. While his list of wins is quite impressive — he has finished guys like Matt Brown, Nathan Coy, Steve Carl and Brock Larson — his list of losses can be an eye-opener to the casual fan.

Foster always comes to fight, and he can take a fight anywhere his opponent wants to go. Of his six losses, five have been to UFC-level fighters, including Rick Story, Diego Brandao and Chris Lytle. So, when casual fans see him step into the cage tonight to face former Strikeforce welterweight champ Jake Shields at WSOF 17, they better not take his talent for granted.

In eight years, Foster has only been to a decision one time. His 22 wins include 12 submissions and nine victories by some form of knockout, which should be no surprise coming from a member of the now-defunct H.I.T. Squad. His last fight was that sole decision, as he grinded out a victory over the extremely durable Gilbert Smith, who trains out of Factory X Muay Thai in Englewood, Colo.

A big takeaway from Foster’s last fight was the stamina that Smith possessed. So, it’s no surprise that when his teammate Dustin Jacoby and other former H.I.T. Squad guys started training at Factory X, Foster followed suit.

“I wasn’t in the best shape for that fight, and these guys train up here in the altitude,” Foster told Combat Press. “My brother Dustin Jacoby has been out here, and he trains there full-time. It just gave me that much more motivation to come out.

“We’ve always been a tight-knit group since Matt Hughes’s H.I.T. Squad closed down. We’ve always stayed in touch and know where the other one is, trying to pass along opportunities. We have our own little squad that kind of stays together.”

Factory X is already a stacked team. With Kru Marc Montoya at the helm, the group that started with Chris and Brian Camozzi, Chase Hackett, Adam Stroup and many others has grown to include guys like Cortez Coleman, Sid Bice and Marcus Edwards. With the addition of the H.I.T. Squad guys, the camp has absolutely blown up in the last year.

“The team is great, and training up here at altitude has cardio benefits for sure,” said Foster. “We’re a tough group of guys, man. We’ve got a ton of good wrestlers, a ton of good strikers, and really good grapplers and stuff like that. It wasn’t a tough decision to come out here and train for top-level fights.”

When the WSOF came knocking, Foster answered with enthusiasm. Never one to back down from a challenge, he was ready to say yes to any opponent. Shields turned out to be a golden, although unexpected, opportunity to get in line for a quick title shot.

“The World Series was going to have me fight Danny Davis,” explained Foster. “They told my manager that. Then, the owner called me personally and told me he wanted me to fight Jake. I’m not one to ever turn away an opportunity to fight, period, so it really wasn’t a hard decision for me. I’m game, man. You know what I mean?”

A win over Shields would not only be a great way to climb back toward the UFC, but it would first and foremost get him an immediate WSOF welterweight title fight. However, getting a win over Shield is no easy task.

Shields is known for his sticky wrestling and American Jiu-Jitsu proficiency. He is not an easy guy to beat. He’s very much a lay-and-pray sort of grinder, which is probably why he was bounced from the UFC after a 5-3 record that included seven decisions and a failed drug test for marijuana. That being said, the WSOF is happy to have him, and Foster knows what to expect.

“I’m not going to bring anything he hasn’t seen before. He’s been in there with some of the best in the world, man. It’s going to be no surprise to him what I’m going to do. I’m going to do that thing. I’m going to try and surprise him, you know. Tag him up and work toward a victory.”

Foster and Shields are very different fighters in the sense that Foster comes to battle and Shields comes to hang on. The casual fan may expect Shields to take the victory based on name recognition alone, but Foster knows what he brings to every single bout.

“An exciting fight, man,” said the veteran fighter. “I can’t guarantee a victory, but I can guarantee one damn thing: it’s going to be an exciting fight. I’ve always had an exciting style, one that fans tend to like. As long as I can fight off his bullshit and possibly put down what I’m bringing to the table, I think the fans will be pleased.”

The fans will not be the only ones who will be pleased. When Foster is not training in Colorado or spending time in the construction world, he’s building on the most important part of his life, his three sons.

Foster may have dropped off the radar for a while due to some legitimate and some bogus medical reasons, but one thing’s for sure, he’s only 30 years old and he’s ready to get back to the big show. The next step is a win over Shields tonight at WSOF 17, live from the Planet Hollywood Resort and Casino in Las Vegas.

“I’m still here. I never gave up, and I never will give up. I’ll call it quits when I’m ready, and I don’t see that being any time soon. I think the best of me is yet to come. I’m going to finish out my career at 155 pounds. I stepped up for this opportunity to take on Jake and for the opportunity to get back on the big screen.”

Foster would like to thank all of his coaches and teammates, especially Dustin Jacoby and Jacoby’s wife for letting him stay with them for this camp. He would also like to thank his family, friends, fans and sponsors for supporting him as he continues to gain momentum in rebuilding his career. Follow Brian on Twitter: @BrianFoster170
Advertisement