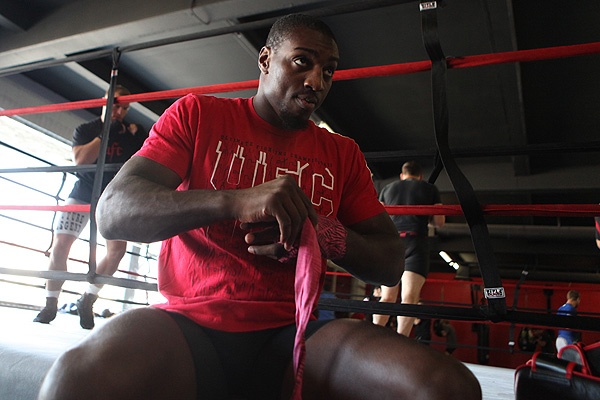 UFC 179: A Must-Win Situation for Phil Davis and Glover Teixeira

At UFC 179, most of the attention will be placed on the evening’s headlining title bout between Jose Aldo and Chad Mendes. However, that’s not the only significant fight of the evening. The UFC 179 co-main event may not feature a title on the line, but it might as well be for UFC gold considering the magnitude of importance the fight holds for both men involved.

Those men are Glover Teixeira and Phil Davis. Both fighters began their UFC careers as highly touted prospects. Teixeira is older and more seasoned, but he was still untested inside the Octagon. Davis, a NCAA Division I wrestling champion, has the pedigree and athletic ability to make him a blue-chipper, but he hasn’t always channeled his potential in the most effective of ways.

Teixeira validated much of the hype surrounding him with his debut against Kyle Kingsbury at UFC 146. Nobody would confuse Kingsbury with a title contender, but it was still shocking to see how Teixeira controlled the action against a durable veteran. The Brazilian followed that performance up with another strong showing against fellow Brazilian Fabio Maldonado at UFC 153. The back-to-back impressive outings earned Teixeira a bump up in competition in the form of MMA legend Quinton “Rampage” Jackson, who squared off with the Brazilian in January 2013. Teixeira looked the part of a true contender as he easily dispatched of Rampage. Another pair of stoppage victories—over James Te Huna and Ryan Bader—earned Teixeira a crack at the current UFC champion, Jon Jones. Teixeira’s run of brilliance came to an end against Jones, who put on the performance of a lifetime and bested the Brazilian in every facet of MMA.

Davis has seen his surge up the contender’s charts run into a roadblock, too. The UFC wasted little time in putting Davis up against quality opponents during his first few fights. His UFC debut came against fan-favorite Brian Stann at UFC 109 and his next Octagon appearance was a win over Alexander Gustafsson, a man many consider to be the second best light heavyweight in the world. Davis was also able to dispatch Antonio Rogerio Nogueira and finish Tim Boetsch in spectacular fashion. However, Davis’s run to the top took a detour after an awful showing against Rashad Evans in January 2012. “Mr. Wonderful” bounced back, putting together three consecutive victories and a no-contest (an eye poke caused the end to the first meeting with Wagner Prado; Davis would win in the rematch). Once again Davis found himself in prime position to challenge for a title. He even “played the game,” so to speak, by taunting the champion, saying he’d make Jones crumble like a cookie. But for as much as fans were excited to see some life out of Davis, his efforts would be in vain. A returning Anthony “Rumble” Johnson made it look easy as he took out the former Penn State Nittany Lion.

Now, the two men meet at a crossroads at UFC 179. They are still ranked inside the top 10 of the UFC rankings, but they face a must-win situation. Davis is in danger of entering the “Michael Bisping zone,” where he’s more than capable of taking out mid-range guys, along with maybe one or two high-ranked foes, but when title implications are on the line, he simply falls short of the mark. Davis was outclassed in both fights where he was a win away from a title shot, which means the dreaded gatekeeper label isn’t too far behind.

Although there’s no shame in losing to perhaps the best MMA fighter on the planet, the manner in which Teixeira lost to Jones was surprising. Heading into their UFC 172 clash, the popular opinion was that Jones would have the advantage at range and in the wrestling department, while Teixeira would threaten him with knockout power and work a clinch game against his much lengthier opponent. Instead, Jones held the upper hand in every aspect of the contest. Simply put, Teixeira was nowhere near the level of Jones at UFC 172. A loss to Davis would send the Brazilian tumbling down the rankings. Given his age—Teixeira is 34 years old—a title run would almost certainly be out of the question if he comes up short against Davis. Teixeira has been in the MMA game since 2002, and although he hasn’t always been an active fighter, that’s still a lot of wear and tear on the body.

The Davis-Teixeira bout seems to be flying under the radar a bit given the back and forth between headliners Aldo and Mendes. Maybe that’s a good thing for a guy like Davis, who has struggled when the spotlight has been turned his way. Maybe it’s a good thing for Teixeira, too, considering he’s likely already facing quite a bit of pressure competing in his home country. At UFC 179, Aldo and Mendes will be fighting to decide the future of the featherweight division, but Davis and Teixeira will be fighting for the future of their MMA careers. This may come down to the old cliché of “who wants it more.”