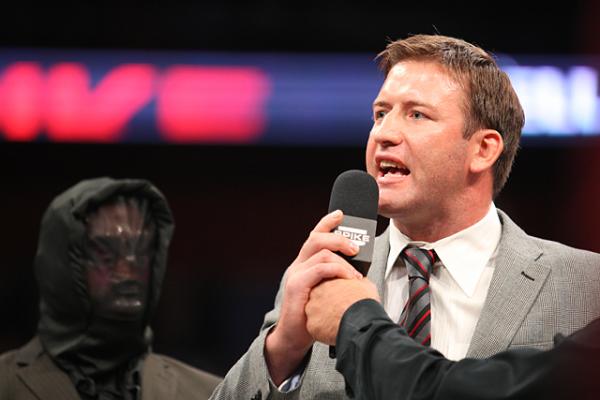 My name is Eric, and I’m a 30-year-old man who loves professional wrestling. I signed up for the WWE Network the first day it was available. I go to Ring of Honor live shows. I own both “Yes” and “No” versions of Daniel Bryan t-shirts. Out of all of the uncool things about me, and there are many, I’ve been told by a lot of my friends that this one is the worst.

I remain, however, steadfast in my passion for what I consider to be one of America’s greatest art forms. Are the match outcomes predetermined? Sure, but I like movies, television and other forms of fiction too. Are the battles themselves choreographed? Absolutely, but the sort of violent ballet performed in the squared circle requires meticulous training and the utmost attention paid to one’s techniques, just like every other performance art promoted to a wide audience.

Despite what those whose knowledge of professional wrestling is limited to Hulk Hogan and The Rock might try to assert, the industry has long since given up the charade of trying to maintain any sense of legitimacy. In this respect, it remains unique in American culture as a live athletic spectacle that attracts millions of enthusiastic fans both in person and on television, but one which everyone over the age of 12 knows is all just a show.

It might come as a bit of a surprise, then, that I can’t stand when the sort of staged violence and trumped-up rivalries we see in pro wrestling make their way into the world of “real” sports. As much as I love to watch WWE’s Dean Ambrose deliver a masterful promo before throwing his body around the ring with someone like fellow up-and-comer Seth Rollins, I know that the two are actually working together to put on such a show for the fans. Again, in-ring rivalries in professional wrestling are almost never reflective of actual backstage animosity (perhaps with one extremely notable exception). Actually, some of pro wrestling’s most memorable feuds have been between people who were very close in their personal lives. In that way, at least pro wrestling is honest about its open dishonesty. That is, the performers pretend to hate each other in order to promote their next big match, but at the end of the day everyone in the corporate hierarchy at WWE would freely admit that their show is strictly entertainment.

On the other hand, when the sort of manufactured rivalries common in professional wrestling end up being played out by athletes in so-called “legitimate” sports, it just comes off as silly, and not in a good way. Take, for example, the in-cage debacle that occurred last Friday night during Bellator 123 in Uncasville, Conn.

Now, the first thing people probably noticed was that Bonnar was accompanied to the cage by a similarly sized man wearing a mask, which might have tipped both fans and Bellator officials that something weird was about to happen. Instead of conducting your standard “I’m gonna train hard and give it my all” pre-fight interview, Bonnar took control of color man Jimmy Smith’s microphone (of which Smith admirably maintained possession during the entire ordeal) and proceeded to launch into a tirade that simultaneously impugned Ortiz’s relationships with his training partners and with Jenna Jameson, the mother of two of Ortiz’s children. The most bizarre portion of Bonnar’s interview was the “dramatic reveal” of Bonnar’s masked accomplice as former UFC heavyweight and ex-Ortiz colleague Justin McCully, the man who Bonnar said inspired him to challenge Ortiz in such an aggressive fashion. Ortiz would return fire with some below-the-belt comments of his own before seeming to abandon argument altogether in favor of physical confrontation. A shoving match ensued, and Bellator officials quickly separated the belligerent parties before things could get truly out of hand.

Of course, the immediate reaction to all of this was that it seemed too good to be true. After all, we’ve seen fighters with legitimate beefs trade verbal barbs (Nick Diaz and Georges St-Pierre) and have even witnessed the occasional press conference tussle (Jon Jones and Daniel Cormier), but never before had we seen two fighters without any history of enmity stand in a cage on a night they’re not competing, deliver lengthy diatribes against each other and then cap it off with a little tussle.

In other words, the whole thing seemed a lot more like pro wrestling than like MMA. (The whole ordeal sort of reminded me of this.)

In the days since, Bonnar has admitted that his part of the confrontation was planned in advance and that both Spike and current Bellator President Scott Coker had no knowledge of what was to take place. Bonnar goes on to further explain that there was no previous animosity between him and Ortiz and that his comments Friday stemmed from anecdotal evidence of Ortiz having mistreated some of Bonnar’s associates. Ortiz has been active on Twitter in the days since the in-cage theatrics, but has not indicated that his participation in the scuffle was also predetermined. Coker, meanwhile, similarly denied any role in Friday’s non-sanctioned action. (One might wonder, however, why he would allow the masked McCully into the cage in the first place. If you were in charge of one of the more successful MMA promotions in the world, would you allow a random masked man into the cage during an interview segment?)

At this point, several days after the incident in question, its legitimacy no longer matters. What is more concerning is how this incident detracted both from the Bellator 123 card on Friday and how it will impact the Bellator 131 event on which Bonnar vs. Ortiz is featured. On Friday, fans were treated to a night of pretty entertaining fights. In fact, all four of the fights preceding the Bonnar/Ortiz skirmish ended in stoppages (including an extremely impressive knockout by Tamdan McCrory) and the night’s main event wound up being a tremendous featherweight clash that saw the crowning of Freire as the division’s latest champion. Despite all that action, the thing most people were talking about after Bellator 123 was a brief dust-up between guys in suits.

Furthermore, the actual scheduled fight between Bonnar and Ortiz is being marketed as the main event for Bellator 131 in November, despite the presence of a lightweight title fight between champion Will Brooks and former titleholder Michael Chandler also on the card, which frankly makes no sense. Other than maybe capturing the small handful of people to whom Ortiz is still a star, what good does placing him in the headlining spot do for Bellator? The same could be said for Bonnar, and probably with more accuracy considering so much of his fame is based on the time he lost that tremendous battle with Forrest Griffin back in 2005.

This says nothing of the fact that highlighting Bonnar vs. Ortiz more than two months before they actually step in the cage makes the seven (yes, seven) Bellator events between now and then seem vastly less important. Do Bonnar and Ortiz have more name recognition than most of the other fighters on Bellator’s roster? Yes, but it’s not like we’re talking about guys who have been stars within the last five years, so how much is their presence at Bellator 131 really going to help ratings?

I’m not arguing that the Bonnar/Ortiz fight deserves no attention at all, but for Bellator to seemingly bump this inconsequential showdown ahead of the other fights that have the potential to make real, current stars out of the Bellator roster (and thus help the product gain more traction overall) seems like a poor long-term strategy. If we were talking about guys who are relevant right now that Bellator stole from the UFC with the promise of more money, that would be one thing. Unfortunately, Bonnar and Ortiz are not those guys.

I guess none of this really comes as a surprise. Coker knows how to put together an entertaining show, and it’s likely that he’ll continue to use ex-UFC fighters with even moderate name recognition as on-paper attractions to Bellator’s cards. I’m sure the logic in place is that the “name” fighters will attract fans, who will then also watch Bellator’s homegrown fighters ply their trade. Viewers then are vested in the careers of these exciting Bellator fighters and ratings go up for future broadcasts. All of this is to say that I trust Coker to do the right thing when it comes to shining the spotlight brightly enough on the fighters who have actually made names for themselves in Bellator itself. We are, however, talking about the guy who put Herschel Walker in the main card of two Strikeforce events. With the bar having been set there, Bonnar vs. Ortiz doesn’t seem so unreasonable.

Regardless of the match-ups Coker and Co. put together to attract fans to Bellator in the coming months, though, let’s hope that Friday’s kerfuffle is the last we see of such blatantly staged theatrics in their cage. I love pro wrestling and I love “real” sports, too, but I’d much prefer to keep the two separate.

Well…except when this happens.