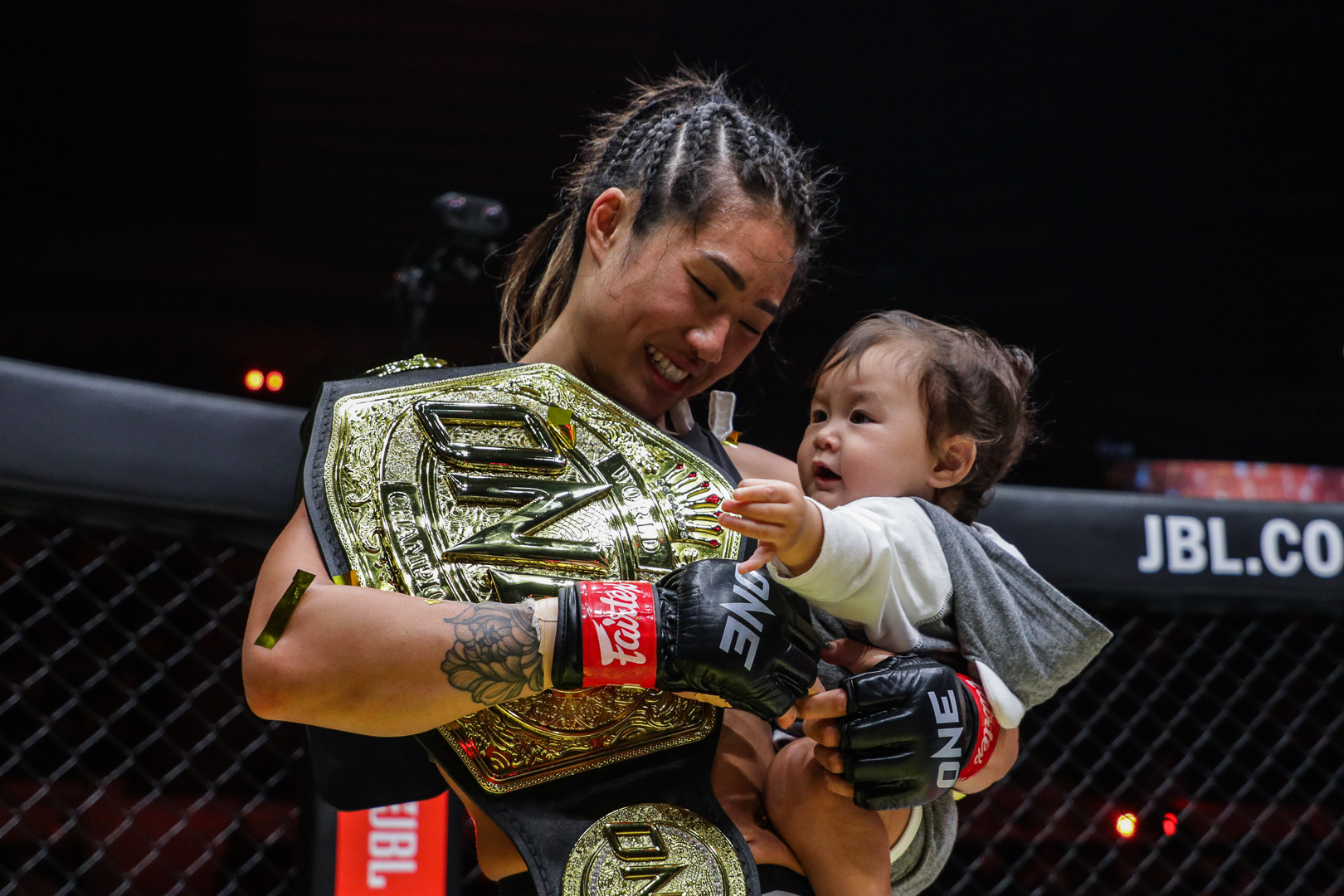 Angela Lee with her daughter (ONE Championship)
News

ONE X’s Angela Lee: A Focused Champ and A Loving Mother

Angela Lee’s return to the ONE Championship Circle at ONE X was an immense triumph. The ONE Women’s Atomweight World Champion defeated challenger Stamp Fairtex in the main event of ONE X on March 26 – and she got to share the experience with her daughter, Ava Marie, as the confetti fell in celebration.

The 25-year-old’s beloved daughter served as Lee’s inspiration going into the bout. She had a mission to become ONE’s first “Mom Champ.” And that is what she accomplished on Saturday night. Following the battle, the United MMA star was filled with gratitude.

“Man, I love my job,” said Lee in an Instagram post after the victory. “Best job in the world. It can give you the highest of highs and lowest of lows. To do what we do at the highest level takes an insane amount of courage. I applaud my opponent and all the other fighters who competed on ONE X.

“Thank you [ONE Championship] for giving me the stage and platform to do what I do best! Thank you Singapore for showing up and giving us great energy!! Thank you everyone around the world, for tuning in!!! Thank you [Stamp Fairtex] for bringing out the best in me! The future is very bright for you. Keep your head up. Thank you [Chatri Sityodtong] for the 50k bonus!”

And it was a well-earned victory. Lee continued her trend of overcoming adversity to achieve success, and she has undoubtedly become a role model for anyone going through tough times in their life.

Lee has overcome obstacles inside the Circle, such as battling through pneumonia against Istela Nunes and surviving the crushing power of ONE strawweight world champion Xiong Jing Nan in their rematch.

At ONE X, it was no different. Stamp laced a brilliant hook to the liver of Lee that sent her reeling. But the champion’s heart wouldn’t let her go down. Lee survived, recovered, and took the bout to the mat. And the longtime queen seemed to have shocked even herself.

“Still trying to process everything that just happened,” wrote Lee. “It still feels like a dream! Never thought I’d be able to fight through a liver shot, but I guess overcoming adversity is my thing! I’m telling you guys, never underestimate a focused champion [and] a mother’s love.”

A mother’s love has driven Lee to come back to the sport better than ever, and she looked to be in the best shape of her career. That, coupled with her new motivation, likely helped her overcome Stamp’s huge body shot and put on a memorable performance under the brightest of lights.

Mothers remain the pillar of strength, and Lee is another example of that, just shy of her daughter’s first birthday and with Mother’s Day just on the horizon. This special moment is one for the whole Lee family to savor.