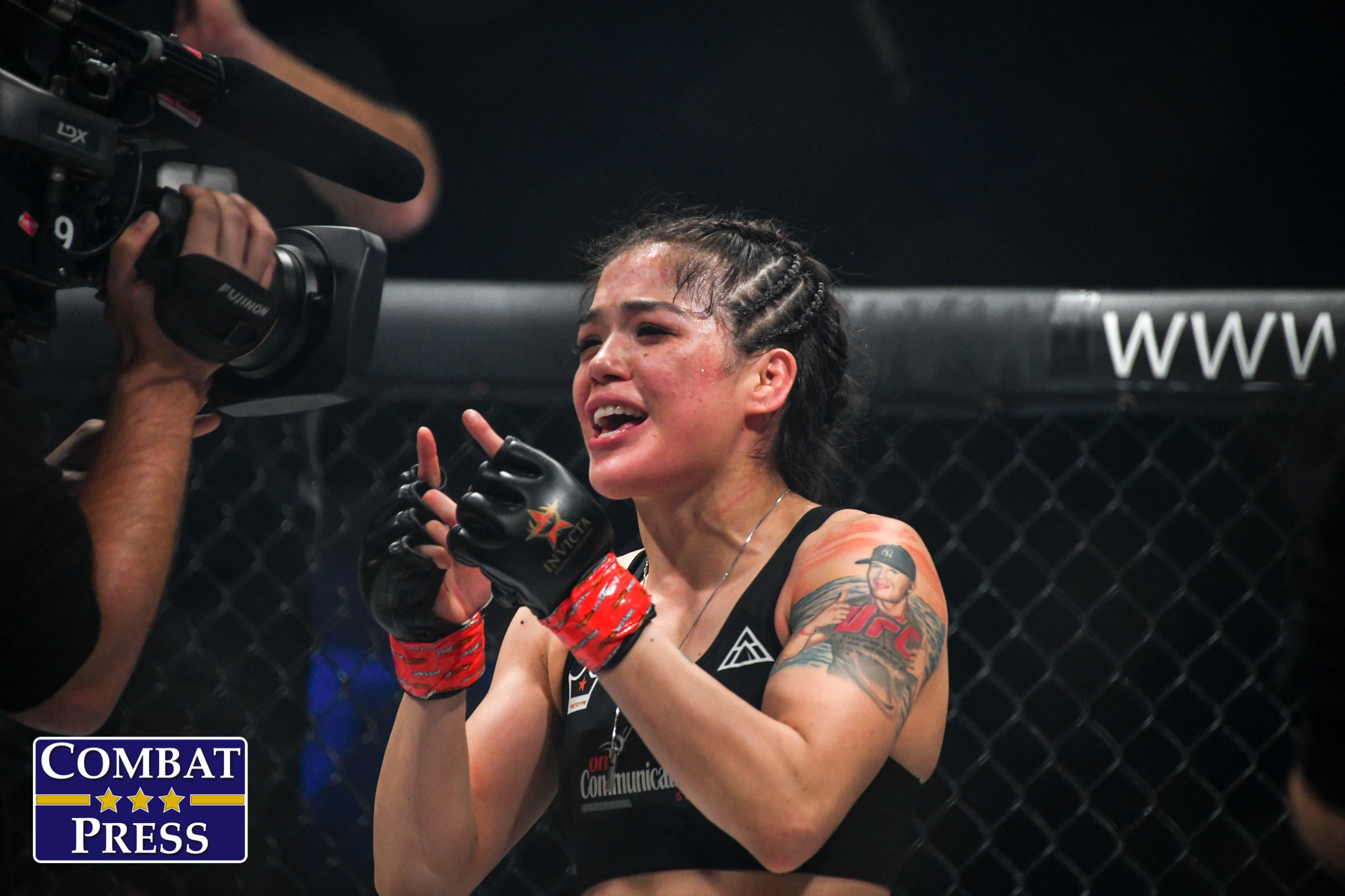 We had a lot of female action this weekend, including some really good bouts. We are going to take a look at the three contests we previewed on Thursday. This includes the Bellator 257 scrap between Veta Arteaga and Desiree Yanez, plus a pair of UFC bouts that featured Jessica Penne in her long-awaited return against Lupita Godinez and Tracy Cortez against Justine Kish. Let’s get started.

This fight was going to be interesting because both ladies like to come forward. The winner in the striking realm was going to possibly be determined by who could make the other fight differently or take a step back.

In round one, Yanez got an initial clinch, which was something I thought could be beneficial to her in this fight. I expected she could do damage in there and maybe frustrate Arteaga, wear on her, and slow her down as the fight progressed. However, they separated fairly quickly without Yanez getting a lot done.

As they exchanged, the power edge was clearly in Arteaga’s favor. She was landing the harder shots. Yanez was going in and out — and she did land some good ones of her own — but she did not have quite the same power. On both the entry and the exit, Yanez was keeping her head a bit high, which is never a good thing. Furthermore, she was moving straight back. Arteaga was able to use this to her advantage and land good counters and shots on Yanez.

In the second frame, Arteaga started out even more aggressively. She came forward and actually dropped Yanez. She followed Yanez down, which at the time I thought was a bad idea. I wanted to see her make the hurt Yanez stand. Yanez was able to get up quickly, but Arteaga took her right back down. Again, I wasn’t in favor of this. I was wrong, though, because Arteaga was doing great on the ground, where she even threatened with a rear-naked choke that seemed very close.

Yanez defended well, though. She was making her way up, too, but then Arteaga hit her with a clearly illegal knee that was definitely not on purpose. However, it was enough for the referee to take a point. From there, they traded strikes until the end of the round.

In the third round, Yanez got a takedown, which I was expecting more often from her. I’m not saying it is good or bad that there weren’t more, but just making an observation here. Arteaga was able to stand up, and from there it was mostly just trading strikes again the rest of the way.

Arteaga defeated Yanez via majority decision, but Yanez looked good in her Bellator debut. It was a good win for Arteaga over a tough opponent to get back on track. Meanwhile, Yanez showed that she can be a problem in the division.

What’s next for Arteaga? Perhaps Kana Watanabe? That could be a fun fight.

Penne defeated Godinez via split decision, but this fight was won by one thing more than anything else: Penne’s experience. She fought a smart, veteran fight. She didn’t engage with Godinez in the areas where Godinez had a clear advantage, which was on the feet exchanging strikes. There really isn’t a lot to discuss here, because it was almost three mirror-image rounds.

In the first, Godinez got off to a good start. She landed some hard shots. Penne did a good job from there in realizing she could easily get the clinch. Penne was so crafty (I hate that word) and was able to take Godinez’s back while on the feet.

Now, what wasn’t really discussed on commentary was how Penne was so tricky with this. She was almost distracting Godinez with her feet by looking for things like trips, but those trips weren’t really the priority. It felt like she was using those as the distraction to get Godinez to change her stance and posture. That’s when Penne pounced and spent a long time on Godinez’s back while looking for the choke.

Round two was just more of the same. The problem for Godinez was that she almost was allowing Penne to have what Penne wanted. Godinez was moving straight back. Even when Penne would shoot in, Godinez just moved backwards in a straight line. When you are trying to avoid or escape a takedown, this straight-back movement is like that of a person running to a destination. Eventually, they’re going to reach that destination. Godinez moved backwards, eventually reached the cage, and then had nowhere to go. This allowed Penne to reach the destination, too.

In the third stanza, Penne looked for this same thing again and, for a time, had it. However, Godinez was able to escape early enough that she could do some damage on the feet. She seemed to have a sense of urgency and was looking to try to get the finish or at least do some damage. Penne survived, though, and got the decision.

Godinez is a UFC-caliber fighter. This wasn’t the Octagon debut she wanted, but she still demonstrated that this is where she belongs. Meanwhile, this was a great feel-good story for Penne. She was out for so long, came back a big underdog, and fought a good, smart fight to get her hand raised.

What’s next for Penne? The fight with Hannah Goldy that was scheduled for a couple weeks ago before it was scrapped would seem to be the logical choice.

Sometimes I peg a fight totally right. Sometimes, like with this one, I’m totally wrong. I felt the best shot for Cortez was to stay on the feet and use her power shots. She used power shots for sure, but she used them on the ground. It’s not at all what I was expecting, but it was clearly a smart strategy and led to a win for Cortez via split decision.

Right out of the gate, Cortez got Kish down relatively easily. From there, it was just an assault for the first round. Cortez landed great ground-and-pound and was doing a lot of damage. Kish had the right idea in looking for submissions and throwing them up, but she was not in any way controlling Cortez’s posture when she went for them. This meant that Cortez could easily posture up and pull her arm out before going right back to work.

The second frame was much better for Kish. Cortez did get it down again and even got Kish’s back. She then went for a body triangle, which was a little surprising. Cortez didn’t have the triangle completely locked — her foot was only half in — but Kish treated it as if it was locked. Kish had to have thought it was in, because she didn’t at all try to break it, though it was there to be broken. That being said, Kish did a great job of eventually escaping the position.

They got back to the feet, and, in another unexpected turn of events, Kish was winning the striking battle. She was landing better combos and landing them with more power. She also used good angles and footwork. Kish did enough to take the round in my book.

In round three, Cortez wasn’t about to let what happened in the prior round happen again. She went back to what worked. She entered with the mindset of winning the round to win the fight. Kish did make a late rush and landed some good strikes to try to steal the round, but she just ran out of time.

What’s next for Cortez? This one’s difficult, so I’ll just throw a name out there: Liliya Shakarova.

That’s it for this week.